UnitedHealth Group (NYSE:UNH) can anchor any long-term investor's portfolio. To call UnitedHealth big would be an understatement. This $285 billion company with 325,000 employees just posted full-year revenue for 2019 of $242.2 billion. That's greater than the gross domestic product (GDP) of Austria, Norway, or Israel.

Its earnings were $14.33 per share, an increase of 18% over the previous year. Think about that for a second -- a company worth hundreds of billions of dollars still managed to increase its earnings nearly 20%. Geographic expansion, new products, and increases in the Medicare Advantage program combine to fuel the growth. So let's take a closer look at the health insurer stock to consider whether it's a buy. 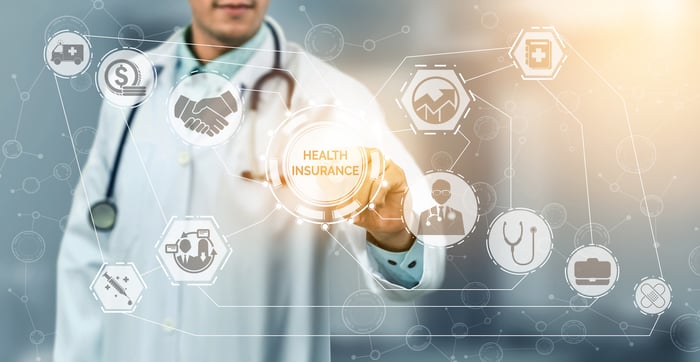 The first thing to know is that UnitedHealth pays a quarterly dividend. In 2019, investors received $3.93 billion in dividends or the equivalent of $4.14 per share. The annual dividend payout in 2020 should be $4.32 per share. Based on its current stock price of approximately $300 per share, the dividend yields less than 1.5%.

Second, UnitedHealth spent $5.5 billion to repurchase 22.4 million shares in 2019, which equals roughly $246 per share. In 2018, the board of directors authorized the company to purchase up to 100 million shares without any time constraints. UnitedHealth still has 72 million shares available under this program.  Investors should be aware that this type of buying, while supportive to the stock, may artificially inflate the stock price and does not last indefinitely. In my view, UnitedHealth will continue to repurchase shares in 2020, although the $300-per-share stock price makes it far more expensive. UnitedHealth first started the repurchase program in 1997 and continues to update the program as needed.

Third, the stock gained 20% over the course of last year. While it did not surpass the S&P 500's growth last year, UnitedHealth outperformed over the longer term. Investors who bought the stock five years ago saw a 165% return without reinvesting dividends. The S&P 500 only gained 61% during that time.

Compared to peers like Anthem (NYSE:ANTM), Cigna (NYSE:CI), Humana (NYSE:HUM), or even CVS Health (NYSE:CVS) which bought insurer Aetna in 2018, UnitedHealth still shines. Its profit margin of 5.88% exceeds its closest rival, Anthem, at 4.61%. An extra percent on hundreds of billions translates into large differences. However, investors must pay up for that best-in-class profit margin. UnitedHealth trades at 21.3 times earnings. Among its peer group, Anthem, Cigna, and Humana sport price-to-earnings ratios of 16.48, 19.45, and 18.85, respectively.

Should you be scared off by the premium? Not at all. Nearly 90% of the stock sits in the accounts of the largest institutional asset managers. As it weighs in as the 14th-largest component in the S&P 500, virtually every large or multi-cap mutual fund and ETF owns the stock. It also means the most investors with retirement accounts passively own the stock through an index ETF or mutual fund. This stability in the shareholder base should soften any corrections in the stock price.

Will healthcare reform dampen UnitedHealth's prospects? Probably not. Over several decades, a variety of healthcare reforms have been proposed with little to no success. A divided Congress will likely continue this practice. Politicians will likely be cautious before enacting any legislation that would disrupt or upset the members of UnitedHealth, the largest health insurer, which covers approximately 50 million Americans.

Questions surrounding the economy and healthcare costs will continue to flourish. Healthcare reform rhetoric will be pervasive throughout the current election cycle. Sure, these could produce some headwinds for UnitedHealth's stock. These, too, shall pass. Over the long term, the company has consistently managed to grow and pay back shareholders. Why not own a healthcare stock like UnitedHealth that allows you to sleep comfortably at night? I do.