A down day for markets and disappointing profits led shares of Carter's lower Monday.

Shares of Carter's, Inc. (CRI 0.05%), a large North American apparel manufacturer exclusively for babies and young children, dropped as much as 17% early Monday morning, before recovering some, after the company's fourth-quarter profits missed estimates.

Carter's fourth-quarter net sales increased 1.3%, compared to the prior year, to $1.10 billion, which was right in line with analysts' estimates. The bottom line, however, left investors wanting more: Adjusted earnings per share declined 1.1% to $2.81, below analysts' estimates calling for $2.89 per share. U.S. comparable retail sales increased 1.6% and, despite the stock's decline Monday, Carter's 2019 set a record level of sales, earnings and cash flow, as well as posted its 31st consecutive year of sales growth. Management even authorized a new $500 million share repurchase program and bumped up the quarterly dividend by 20% to $0.60 per share. 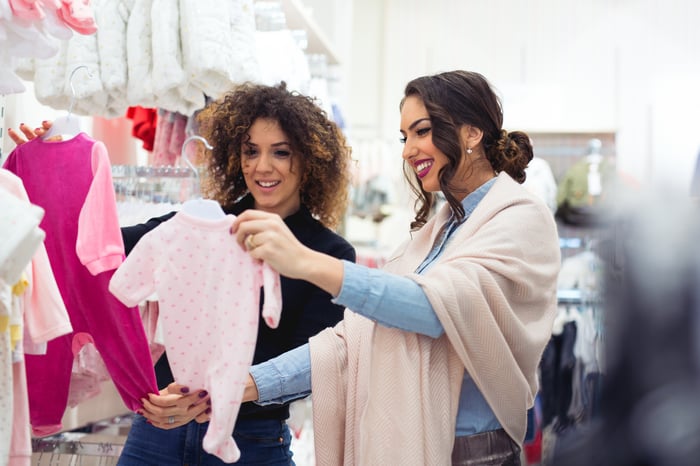 "In 2019, Carter's strengthened its leading share of the $27 billion U.S. young children's apparel market. Our growth was driven by the success of our exclusive brands designed for the largest retailers of young children's apparel in North America, and stronger omni-channel capabilities in our direct-to-consumer business." said Michael D. Casey, chairman and chief executive officer, in a press release.

Management noted the decline in profits was primarily due to higher inventory and continued investments in its business, which hopefully proves to be a short-term speed bump for long-term gains. Investors will have to take Carter's stock volatility with a grain of salt, and other companies more closely tied to China, as the company plans to source roughly 15% of its products from China in 2020  -- and China is still working its way through the coronavirus outbreak. The company predicts net sales will increase 2% to 3% in 2020 and believes adjusted earnings per share will increase roughly 4% to 6%.