Please ensure Javascript is enabled for purposes of website accessibility
Log In Help Join The Motley Fool
Free Article Join Over 1 Million Premium Members And Get More In-Depth Stock Guidance and Research
By Daniel B. Kline – Feb 25, 2020 at 10:51AM

Costco (COST 1.25%) warehouses offer a food court that sells $1.50 hot dog and soda combos, cheap pizza, churros, ice cream, and other treats. Those food courts have unofficially been open not to just members but anyone who wanted to eat there.

That wasn't an official policy, but most of the warehouse club's locations let non-members eat at their food courts. Apparently that's going to change, according to signs that have been appearing in some of its stores, as first reported by an Instagram account not affiliated with the chain.

"Effective March 16, 2020, an active Costco membership card will be required to purchase items from our food court," the sign reads. "You can join today. Please see our membership counter for details." 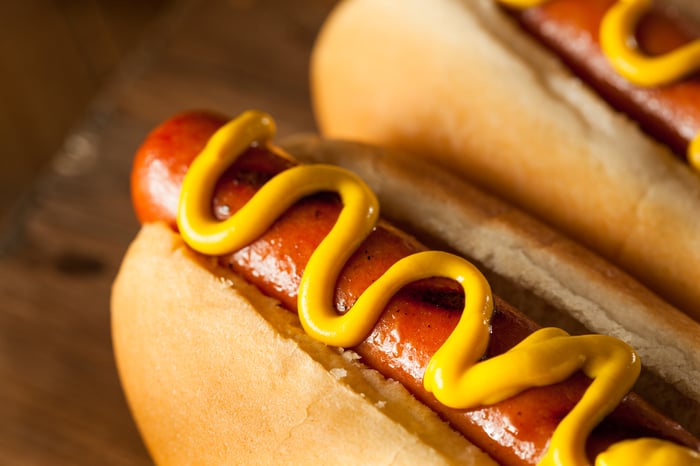 Costco is going to keep non-members out of its food courts. Image source: Getty Images.

The warehouse club refused requests from multiple media organizations, simply noting that all of its stores follow the same policies. It would make sense for the chain to limit access to its food courts as they serve as loss leaders designed to increase member satisfaction while driving them to its stores.

Offering this perk to non-members makes no sense unless it drives people to join, which it probably doesn't. Subsidizing meals and snacks for members drives loyalty and gives them a reason to visit. Doing the same for non-members is basically wasting money.

This change will force non-members to either stop eating at the warehouse club or join it. Either one is a win for Costco.

The chain wants more members and it likely also wants to cut down on selling low or no-margin food to non-members. This move forces people to make a choice. They can join or stop eating at the chain's low-priced food court.