Please ensure Javascript is enabled for purposes of website accessibility
Log In Help Join The Motley Fool
Free Article Join Over 1 Million Premium Members And Get More In-Depth Stock Guidance and Research
By Timothy Green – Feb 25, 2020 at 11:03AM

Home Depot saw a surge in comparable sales, and an analyst expects lower earnings for Apple in the coming quarters.

An early recovery quickly gave way to another decline on Tuesday for the Dow Jones Industrial Average (^DJI -0.66%). After shedding around 3.5% of its value on Monday, the Dow was down another 0.54% at 10:30 a.m. EST Tuesday. Fears of a global coronavirus outbreak aren't going away.

Home Depot (HD 0.18%) stock was up on Tuesday after the home improvement retailer reported solid fourth-quarter results. Shares of Apple (AAPL -0.32%) weren't so lucky, sinking after an analyst lowered estimates due to the coronavirus outbreak. 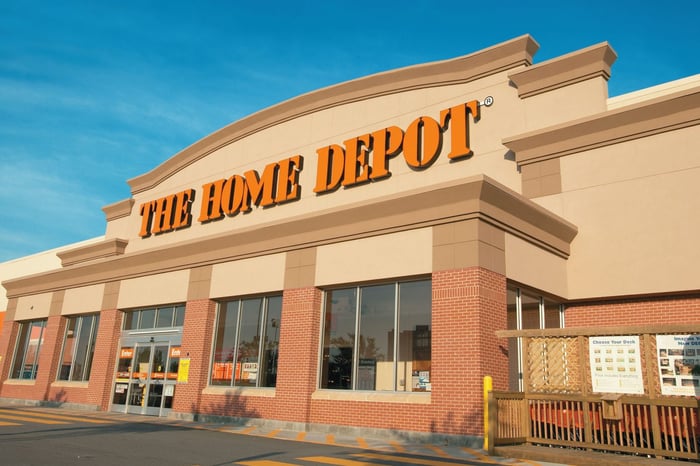 Total sales were $25.8 billion, down 2.7% year over year due to an extra week in the prior-year period which contributed additional sales of $1.7 billion. Comparable sales were up 5.2%, beating analyst expectations of 4.8% growth.

Home Depot reported earnings of $2.28 per share, up from $2.09 per share in the prior-year period and $0.17 higher than the average analyst estimate. The earnings increase would have been greater if not for the extra week last year, which added $0.21 per share to the total.

Along with its results, Home Depot announced a 10% increase to its quarterly dividend. The new $1.50-per-share dividend will be payable on March 26 to shareholders of record on March 12.

For this year, Home Depot expects to grow sales by 3.5% to 4%, driven by comparable sales growth in the same range. The company plans to open six new stores, buy back at least $5 billion of its own shares, and produce earnings per share of about $10.45. EPS will be up about 2% if the company hits its target.

Shares of Home Depot had begun to pull back a bit in the past few days, but Tuesday's surge largely undid that decline. The stock is now only a few dollars shy of its 52-week high.

Apple stock was down 0.1% Tuesday morning following some analyst pessimism. Analysts at Needham cut their estimates for Apple's earnings, citing the negative impact from the coronavirus outbreak on the company's supply chain.

Needham now expects the tech giant to produce earnings per share of $2.47 in the second quarter and $2.44 in the third quarter, down from previous estimates of $2.99 and $2.76, respectively. For the full fiscal year, Needham shaved billions of dollars off its revenue estimate. Needham now sees Apple generating sales of $268.76 billion in fiscal 2020, down from a previous estimate of $282.92 billion.

Needham maintained its buy rating and its $350 price target on Apple stock, although it warned that any disruptions to the supply chain past June 1 could delay the launch of a new slate of iPhones in the fall.

Apple has already pulled its guidance for the second quarter due to the coronavirus outbreak. Not only is its supply chain in turmoil, but demand for its products in China is depressed. If the virus takes hold in other countries, weak demand outside of China could further hurt Apple's sales.

This crisis will eventually pass, but until the outbreak is contained, Apple's results won't be pretty.