Please ensure Javascript is enabled for purposes of website accessibility
Log In Help Join The Motley Fool
Free Article Join Over 1 Million Premium Members And Get More In-Depth Stock Guidance and Research
By Timothy Green - Feb 26, 2020 at 11:57AM

Disney surprised investors with a CEO change, and Walmart becomes a little more like Amazon.

The Dow Jones Industrial Average (^DJI 0.21%) staged a comeback on Wednesday following two days of brutal losses. The Dow was up 1.38% at 10:40 a.m. EST, even as the global coronavirus outbreak showed no signs of slowing down.

Shares of Disney (DIS 2.81%) failed to participate in the rally after the company announced an abrupt CEO change. Meanwhile, Walmart (WMT 0.03%) stock rose slightly after the retailer unveiled its own third-party fulfillment service.

Disney gets a new CEO

In a sudden move that surprised investors, Disney announced late Tuesday afternoon that its longtime CEO Robert Iger was stepping down, effective immediately. Iger is being replaced by Bob Chapek, a Disney veteran who's been with the company since 1993. Chapek was previously the chairman of parks, experiences, and products.

Iger will assume the role of executive chairman and direct the company's creative endeavors. His contract with the company ends on Dec. 31, 2021. 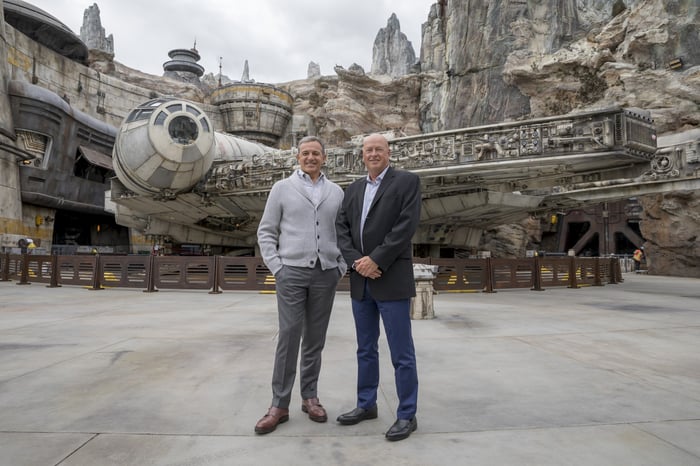 "With the successful launch of Disney's direct-to-consumer businesses and the integration of Twenty-First Century Fox well under way, I believe this is the optimal time to transition to a new CEO," said Iger in the press release announcing the news.

The CEO switch comes as the global coronavirus outbreak threatens various parts of Disney's business. The company's parks in Shanghai and Hong Kong remain closed, and movie theater closings in the country could derail film debuts. If the virus begins spreading in the U.S., consumers may opt to avoid Disney's resorts.

Disney stock was down 0.9% on the news, even as the broader market made a comeback. The suddenness of the news may have caught investors off guard.

In an effort to better compete against e-commerce giant Amazon, Walmart has launched a service that provides storage, packing, and shipping for third-party vendors. Amazon's third-party business, which includes fulfillment services, has been a major growth engine for the company. Walmart already allows third-party vendors to sell on its website, but those vendors have previously been on their own when it came to fulfillment.

The move could help Walmart's bottom line, allowing the company to run more volume through its e-commerce fulfillment network without having to invest in additional inventory. It could also broaden the assortment of products available on Walmart's website. One of Amazon's greatest advantages is a vast selection that no other online retailer currently matches.

Walmart's e-commerce sales have been growing quickly, driven by both Walmart.com and the online grocery pick-up and delivery business. U.S. e-commerce sales were up 37% in fiscal 2020, and the company expects growth of around 30% in fiscal 2021. Still, Amazon remains in a league of its own. For Walmart to catch up, it needs to become more like Amazon. The launch of Walmart's own fulfillment service is a step in that direction.

Shares of Walmart were up 0.3% Wednesday morning, trailing the broader market.