Please ensure Javascript is enabled for purposes of website accessibility
Log In Help Join The Motley Fool
Free Article Join Over 1 Million Premium Members And Get More In-Depth Stock Guidance and Research
By Jeremy Bowman – Feb 26, 2020 at 8:17AM

With the coronavirus sending markets tumbling, everything is shaping up for the Berkshire Hathaway CEO to make a major deal.

That quote is not only one of Warren Buffett's best-known aphorisms, but it's also the mantra that has guided his investing strategy over much of his career.

The Berkshire Hathaway (BRK.A -0.06%) (BRK.B -0.95%) chief has long been opportunistic with his stock purchases and investments, taking advantage of the 2008-09 financial crisis, for example, to scoop up preferred stock in Goldman Sachs and Bank of America in the years following, when the giant lenders were still ailing from the Great Recession.

However, as the current bull market has now extended to more than a decade, Buffett has grown weary of chasing overpriced stocks and businesses in search of a worthy deal. 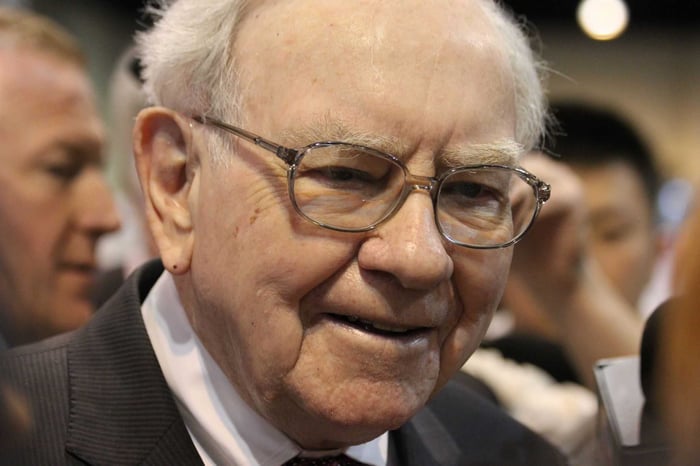 Many times, Buffett has lamented the high valuations of a business he'd like to acquire. In his 2018 letter to shareholders, Buffett wrote, "Prices are sky-high for businesses possessing decent long-term prospects," though he added that the prospect of an "elephant-sized acquisition" sent his heart racing.  In the recently released 2019 letter, he said, "The opportunities to make major acquisitions possessing our required attributes are rare."

While Buffett has bided his time waiting for the perfect opportunity, Berkshire's cash hoard has reached record levels, sitting at $128 billion in cash and marketable securities at the end of 2019. With that kind of dough, he could buy nearly every American company outright, publicly traded or not.

Lately, with various exchanges reeling over novel coronavirus fears, Buffett may be presented with an opportunity to go elephant hunting and make his first sizeable acquisition in years. It looks like a classic case of being greedy when others are fearful. With the S&P 500 down 6.3% in just two trading sessions, now seems like an opportune time for Buffett to pull out his checkbook and make a deal.

Buffett's thoughts on the coronavirus

In an interview with CNBC on Monday, Buffett said that he had noticed an impact on Berkshire's businesses from the novel coronavirus (officially known as COVID-19) outbreak, saying that performance was a little softer than six months ago.

However, he encouraged investors not to buy or sell stocks based on news of the virus, saying they should think of them as businesses. You don't buy and sell a business based on short-term news, he argued.

Characteristically, Buffett also expressed optimism about the American economy, saying that 20 or 30 years from now, American business and probably the world will be far better off than it is today. He didn't disguise his pleasure at stocks falling, saying that lower stock prices are good for Berkshire, a net buyer of stocks.

One sector potentially primed for a targeted acquisition

In his annual letter to shareholders, Buffett said that though Berkshire would prefer whole takeovers of companies, it's been easier to buy stocks. He expected that strategy to continue, with the company making equity investments rather than full-on acquisitions.

However, there's one sector that could be ripe for a Buffett-backed acquisition after the recent sell-off, and one in which he's already made several stock purchases in recent years: airlines.

Though Buffett once hated the airline industry, in recent years he's become a fan, as airlines now deliver solid profits after a wave of consolidation and trade at relatively cheap valuations.

If Buffett liked airlines two years ago, the industry looks even more appealing today in terms of stock prices. Here's how those four stocks have performed since he made those comments two years ago, and in the last week as coronavirus fears have spread. 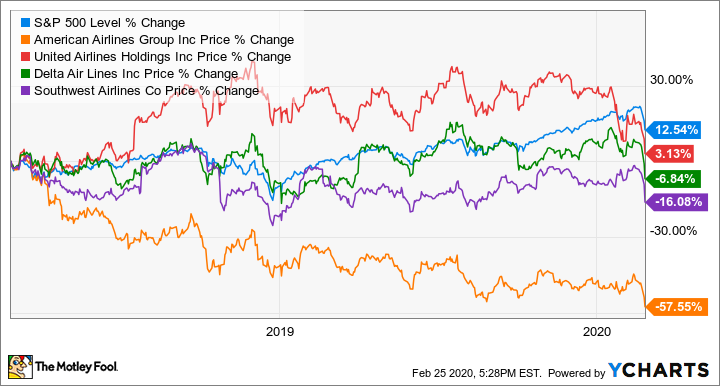 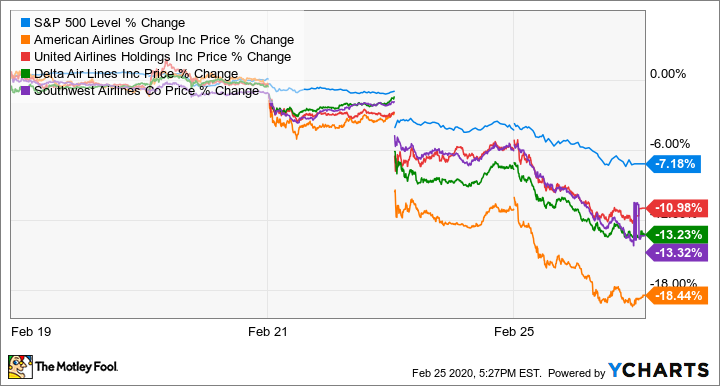 As you can see, all four stocks have underperformed the S&P 500 in both time intervals, and all four have plunged over the last week, as coronavirus fears have hit the travel sector especially hard. Some airlines have suspended flights to China, and United pulled its full-year guidance due to the outbreak.

With his long-term focus and optimistic outlook, Buffett seems like just the kind of investor who would capitalize on the sell-off.

We don't know what will happen with the coronavirus outbreak or the market's reaction to it. The sell-off certainly could get worse and the CDC warned on Tuesday that the spread of the virus in the U.S. was inevitable, with one official saying, "This could be bad."

If the market continues to swoon, however, Buffett is likely to seize the opportunity. While there's no way of knowing if he will bag one of his prized elephants, he's likely to hit the buy button in one way or another.