Please ensure Javascript is enabled for purposes of website accessibility
Log In Help Join The Motley Fool
Free Article Join Over 1 Million Premium Members And Get More In-Depth Stock Guidance and Research
By Rick Munarriz – Feb 26, 2020 at 10:55AM

A premium product that opens the door to a sticky ecosystem is a special find for investors.

Peloton (PTON -0.03%) is having a good run in an otherwise brutal trading week. The market has rattled off its worst two-day slide since 2015, but shares of the high-end fitness specialist managed to close higher on Monday and Tuesday.

The stock's success this week is largely due to the same event that's been sending most of your portfolio's investments lower this week. With coronavirus fears mounting, investors are connecting the dots for companies that can thrive in an environment where homebodies are the new normal. Peloton provides a differentiated experience that duplicates a gym workout or spinning class without having to leave the home or office.

The Peloton story remains largely unappreciated on Wall Street. Even after back-to-back days of gains in a market deluge, the stock is still trading below September's IPO price of $29. It's surprising to see Peloton stock as a disappointment, especially when it shares some surprising similarities to market-darling Apple (AAPL -2.30%). Yes, I did say Apple. 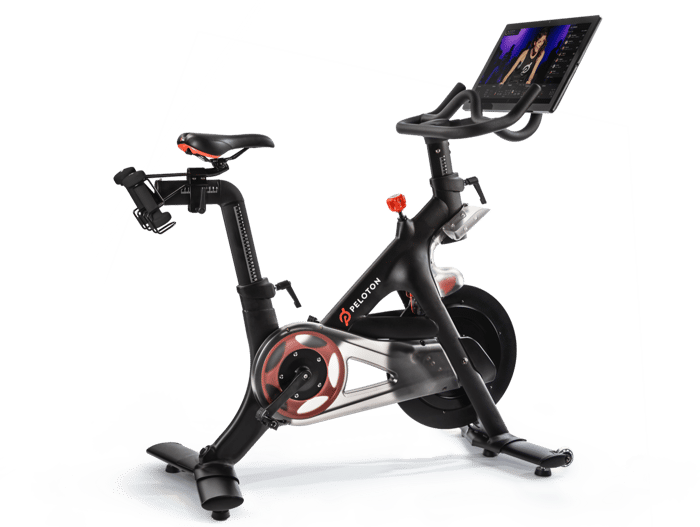 When you think about what sets Apple apart from rival makers of smartphones, tablets, computers, and other gadgetry, it boils down to a combination of pricing power, a well-oiled ecosystem, and the recent push into high-margin services. The iPhone will set you back more than a comparably equipped smartphone pieced together by anyone else, but you know it's the price of admission into the proven and popular iOS ecosystem. Let's approach Peloton from that angle.

Peloton stationary bikes and treadmills start at $2,245 and $4,295, respectively. Obviously, it doesn't cost Peloton that much to actually make these cardio machines. No company would stay in business for long if they had to sell stuff for less than it cost them to make it, but markups matter.

Most of the makers of workout gear compete on price, and that keeps profit margins lean. Peloton, on the other hand, has more pricing flexibility as a result of its aspirational brand and expanding ecosystem.

Peloton's gross margin for its connected fitness products clocked in at a healthy 40.5% in its latest quarter. Put another way, for every $1,000 in hardware revenue that it generated during the quarter, it still retained $405 after accounting for the components and manufacturing costs.

The bad news here is that Peloton isn't currently profitable despite the big head start it has over the competition in terms of pricing power. It's spending a lot more than what's left over as gross profit to cover its corporate overhead and ambitious marketing strategies. However, this leads us to the importance of Peloton's ecosystem. Owners pay $39 a month for access to its weekly live classes, as well as thousands of pre-recorded sessions available on demand.

Retention rates are high in an otherwise fickle world of fitness regimens. Peloton loses just 0.74% of its subscribers in a typical month. When you make a four-figure investment in hardware, you're going to want to stick around. Peloton also offers a cheaper subscription membership for folks who don't want to experience a growing catalog of visual workouts without the system-connected gadgetry.

Investors lately have gravitated to Apple as an investment -- even as hardware revenue declined in fiscal 2019 -- as a services play, and the same can be said about Peloton. Buy an iPhone or an iPad, and you're going to be an App Store customer or pay up for iCloud storage. Peloton's the same way with its digital subscriptions, and the gross margins are naturally higher on that end.

A subscriber base that has nearly doubled over the past year pushed Peloton's gross margin up to 42.3% in its latest quarter. It sees gross margin clocking in between 43.5% and 44.5% for the entire fiscal year. For comparison's sake, Apple's gross margin has been just below 40% in each of the past four fiscal years.

Peloton is a great story, and it's unfortunate that the spread of the novel coronavirus is what's finally drawing attention to the investment this week. The company has so much in common with what sets Apple apart in consumer electronics -- let's see if the bullishness actually sticks around this time.

IPO investing isn't for the timid, but if you can appreciate a fast-growing brand that's killing it on the services front -- like Apple -- you may want to take Peloton out for a spin.