Please ensure Javascript is enabled for purposes of website accessibility
Log In Help Join The Motley Fool
Free Article Join Over 1 Million Premium Members And Get More In-Depth Stock Guidance and Research
By John Ballard - Feb 26, 2020 at 9:38AM

The competition between these two juggernauts just went to another level.

Walmart (WMT 1.97%) has been investing heavily to build up its e-commerce operations in recent years, and now it's taking another big step to close the gap with Amazon.com (AMZN 3.66%).

On Tuesday, the retail giant announced the launch of Walmart Fulfillment Services (WFS), which works the same as Amazon's fulfillment program. This will allow sellers to take advantage of Walmart's "world-class supply chain capabilities" to handle all the leg work of storing and shipping items. 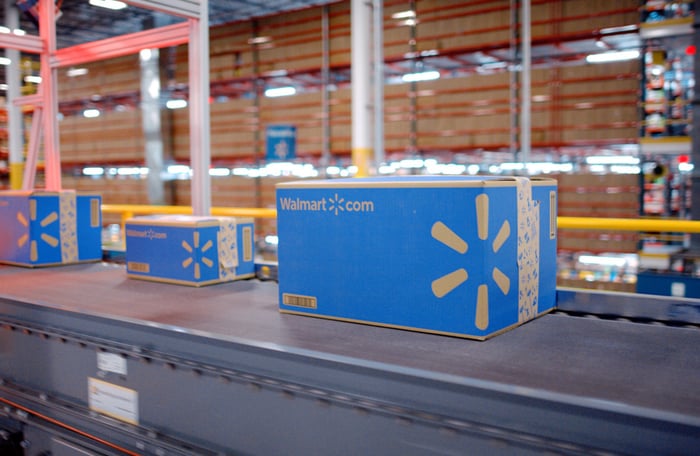 It goes without saying that Amazon is way ahead of Walmart in e-commerce. While Amazon was building out infrastructure to handle fulfillment going back to the 1990s, Walmart was busy building massive supercenters to expand its brick-and-mortar footprint. Walmart has been slow to respond, but it's fighting aggressively.

Walmart's e-commerce sales in the U.S. have been growing between 35% to 41% over the last four quarters. The launch of the new fulfillment service reveals the greater capabilities Walmart has gained to better compete with Amazon. Lately, Walmart has been allocating most of its yearly capital expenditure budget to e-commerce, technology, and supply chain.

However, Amazon is still the king of online retail domestically. In the press release, Walmart said "select sellers" will be able to use WFS. That may indicate that while Walmart has gained enough capacity with warehousing to offer this new service, it is still nowhere close to having the necessary scale to match Amazon's clout.

Last year, a report from eMarketer estimated Amazon's market share of U.S. e-commerce to reach 37.7%. Walmart was expected to increase its share to only 4.7%. A big piece missing from Big Blue has been a third-party fulfillment service, and now it's got that.