Please ensure Javascript is enabled for purposes of website accessibility
Log In Help Join The Motley Fool
Free Article Join Over 1 Million Premium Members And Get More In-Depth Stock Guidance and Research
By Evan Niu, CFA – Feb 26, 2020 at 9:30AM

The fintech powerhouse is paying a lot more than it did for Mint.

In line with recent rumors, fintech giant Intuit (INTU 2.45%) announced this week that it would be acquiring Credit Karma for $7.1 billion in a cash-and-stock deal that will add a new complementary personal finance platform to its stable of brands, which already includes TurboTax, QuickBooks, and Mint. It's a much larger purchase than Mint, which Intuit bought back in 2009 for just $170 million.

Credit Karma will be Intuit's largest acquisition in its history.

The platform provides a variety of free tools that allow consumers to get and understand their credit scores, while offering personalized recommendations for financial products like credit cards or auto loans, among others.

Credit Karma most recently secured a $3.5 billion valuation during a private funding round in early 2018. There had been speculation that the company was considering an IPO in 2020, although Lin suggested last year that it wasn't the right time. Over the years, Credit Karma has continued to expand its offerings, notably with a free tax-filing service that would compete directly with Intuit's TurboTax.

TurboTax is incredibly important to Intuit's overall business; it accounted for a third of revenue in fiscal 2019. That segment is highly seasonal, effectively front-loading sales in any given calendar year during tax season. Intuit has garnered criticism over the past year after ProPublica reported how the company aggressively lobbies to prevent the U.S. government from developing a competing free online tax-filing service. 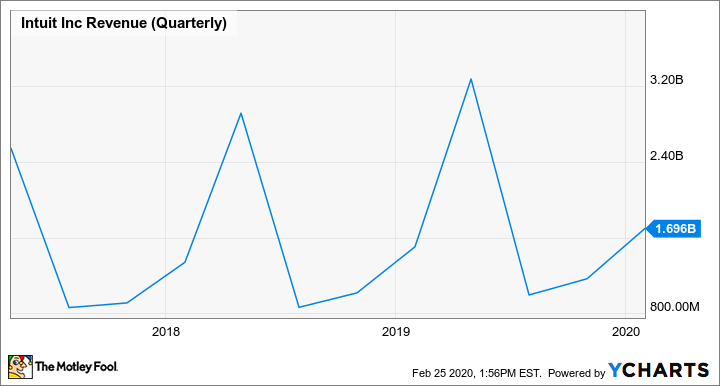 It's also worth noting that Credit Karma's monetization model is essentially identical to Mint's: getting a commission from affiliate links when any of its 100 million users (of which 37 million are active on a monthly basis) sign up for any of the financial products that it refers. There is some overlap between the services that Mint and Credit Karma offer, but ultimately Intuit's vision is to create a personal finance platform that "works like a personalized financial assistant," leveraging artificial intelligence technology. Despite the similarities between Mint and Credit Karma, Intuit plans to keep them as separate apps and platforms.

In a conference call with analysts to discuss fourth-quarter results and the acquisition, Intuit CEO Sasan Goodarzi said that the deal will nearly double its total addressable market from $29 billion to $57 billion. Credit Karma will also help Intuit address younger demographics, with Lin noting that half of registered members are under the age of 44.