Please ensure Javascript is enabled for purposes of website accessibility
Log In Help Join The Motley Fool
Free Article Join Over 1 Million Premium Members And Get More In-Depth Stock Guidance and Research
By Aditya Raghunath - Feb 27, 2020 at 8:52AM

The company has burned significant investor wealth over the years. Here's why investors need to tread carefully, despite the company's return to profitability and a cheap valuation.

GoPro (GPRO -0.15%) shares have plummeted over the past five years. The company went public at a price of $24 per share in June 2014. Shares hit an all-time high of nearly $90 later that year, but they have grossly underperformed the market since then, trading below $4 per share as of this writing.

Stagnant revenue growth has been a major culprit. After topping $1.6 billion in 2015, sales have unable to breach the $1.2 billion mark since then. And though 2019 represented the first year of top-line growth since 2015, analysts expect revenue to decline slightly this year.

Just two months into 2020, the stock is already down another 18%. Could this be a buying opportunity for more daring investors? 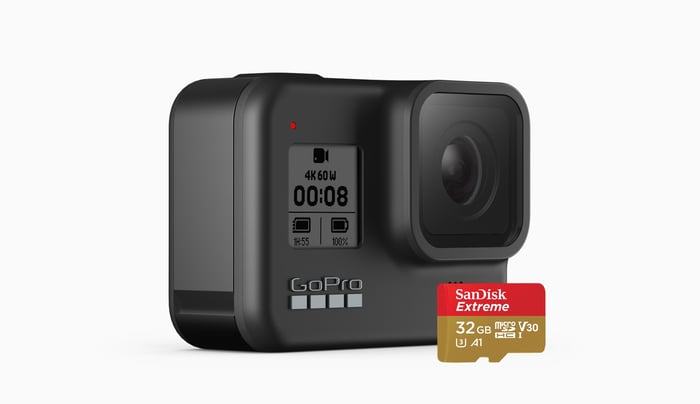 In 2019, GoPro returned to revenue growth as sales increased 4% year over year. Adjusted net income made a complete reversal at $35 million, up from a $32 million loss the prior year, while adjusted EBITDA more than tripled to $72 million.

During the fourth-quarter 2019 earnings call, CEO Nick Woodman noted that the company experienced "material growth of consumer direct sales at GoPro.com," coupled with the growth of its Plus subscription service. At the end of Jan. 2020, total Plus subscribers stood at 334,000, up 69% year over year.

The company is bullish about its Hero 8 Black and Max product lines, which helped GoPro deliver its third-best quarter ever for revenue and second-best for profitability.

Last year, the company also shifted its production facility for U.S.-bound cameras to Guadalajara, Mexico, in order to avoid tariffs. In 2020, GoPro wants to maximize profitability in its core hardware business by looking to prioritize products with a higher average selling price (ASP).

Woodman elaborated earlier this month, "Our 2020 focus is this: Maximize the profitability of our core hardware business by super-serving our most engaged customers with high-end, higher-ASP products; scale our Plus subscription business to 600,000 to 700,000 paid subscribers by year-end; and releasing new GoPro App experience to address what we believe to be a significant TAM [total addressable market] and profit-expanding opportunity. And we intend to do this while keeping a tight rein on opex [operating expenses]."

Why GoPro still isn't a solid buy for long-term investors

In the United States, NPD Group data suggest that GoPro captured a 93% dollar share in the action camera category during the fourth quarter of 2019. With this strong showing, GoPro sales rose 40% year over year during the same period.

Over the last few years, GoPro announced a slew of products across various price points to gain traction in the high-growth emerging markets of Asia. However, such moves have so far failed to materially improve top-line growth, and GoPro has consistently disappointed shareholders and analysts.

One major reason sales are flat is the company's flagship product -- the action camera. GoPro prides itself on manufacturing top-quality products with state-of-the-art features. However, these action cameras usually sell at premium price points (around $300), making them too expensive for consumers in emerging economies.

Bulls may argue that brand loyalists do still generate significant demand for GoPro's high-end action cameras. According to the company, over 90% of GoPro sales in 2019 came from cameras priced over $300, up from 62% in 2018. ASP was up 7% year over year during the fourth quarter, and management expects that figure that metric to rise between 6% and 10% for full-year 2020.

However, these products are mostly a one-time purchase and do not attract annual upgrades the way smartphones do. The improving picture quality, filters, and video capturing abilities of smartphones have also hurt GoPro. The Apple iPhone 11, for example has a 12-megapixel wide-angle lens that can shoot 4K HD video -- those are similar to the GoPro Hero 8's specifications.

Another focus for this year, the Plus subscription service, will contribute just $35 million to $40 million by the end of 2021. Though Plus subscriptions represent high-margin recurring revenue, the business will account for less than 5% of total sales this year.

GoPro was a company that excited growth investors five years ago. Now it struggles with sluggish sales and has been unable to break out of its niche market. After years of underperforming the broad market, GoPro has a forward price-to-earnings multiple of 8.5 as of this writing, but as you can see from the headwinds to its core business, GoPro stock is cheap for a reason.