The drug enters a crowded market -- but it has a convenient format.

The Food and Drug Administration (FDA) has approved Biohaven Pharmaceutical's (BHVN -0.28%) Nurtec ODT as an acute migraine treatment. Shares of the company were up 7.8% at 7:08 p.m. EST in after-hours trading after falling 8.5% during the regular session.

The drug melts in your mouth, literally -- the ODT stands for orally disintegrating tablet. Biohaven plans to have the drug in pharmacies in early March.

Nurtec ODT is a calcitonin gene-related peptide (CGRP) receptor antagonist in the same class as Allergan's (AGN) Ubrelvy, which was approved in December. Ubrelvy is in typical tablet form, which most patients would take with water, making it slightly less convenient than an ODT.

In the clinical trial used to support the approval, Nurtec ODT helped patients return to normal function within one hour. The effect of the drug can last up to 48 hours for many patients, and 86% of patients didn't need any other acute migraine treatments within 24 hours. 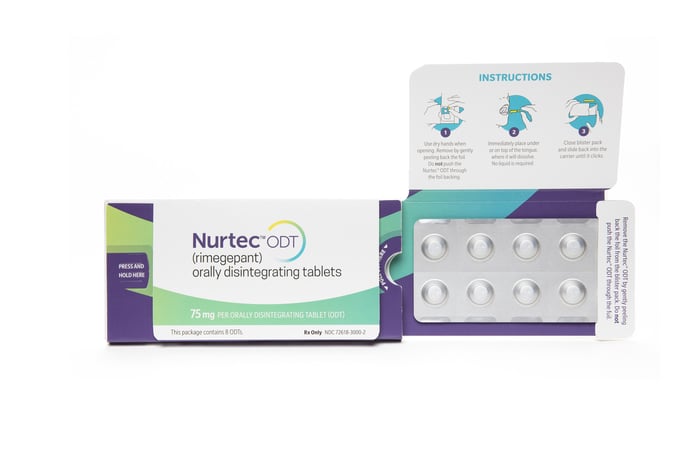 Biohaven is also testing the medication as a treatment to prevent migraines. Results from that clinical trial are expected later this quarter.

If approved as a preventive treatment, Nurtec ODT would compete against other CGRPs such as Amgen and Novartis' Aimovig, Teva Pharmaceutical's Ajovy, and Eli Lilly's Emgality. The good news for Biohaven is that those preventive medications have to be injected; the bad news is that they're dosed once a month or even once a quarter.

Given the choice of daily injections versus a daily tablet, most patients would take an oral medication. When the question is one injection versus 30 tablets, the choice isn't as clear.