Please ensure Javascript is enabled for purposes of website accessibility
Log In Help Join The Motley Fool
Free Article Join Over 1 Million Premium Members And Get More In-Depth Stock Guidance and Research
By Bram Berkowitz - Feb 27, 2020 at 8:13AM

Although a long and complex regulatory approval process ahead, the acquisition of Radius Bank could give LendingClub a cheaper capital source, enhanced profitability, and diversified revenue

LendingClub (LC 6.37%) recently announced plans to acquire Boston-based Radius Bank and its bank charter. LendingClub will pay $185 million for the privately held community bank with $1.4 billion in assets, valuing the company at 1.72 times tangible book value in a deal that is 75% cash and 25% stock.

The acquisition is viewed as a landmark purchase because it makes LendingClub the first fintech to buy a bank in order to obtain its banking charter. The move bypasses the more traditional approach of actually applying for a charter, which other fintechs such as Square (SQ 2.73%) have pursued. LendingClub undoubtedly has a long and cumbersome process ahead to receive regulatory approval. But if it does, I think the company has a ton of upside. 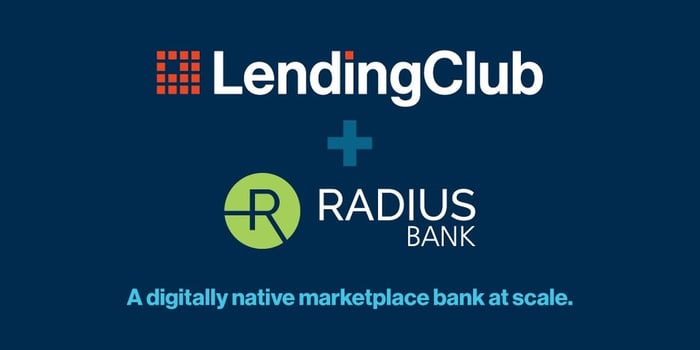 It's a first, so it's a challenge

Shares of LendingClub plunged by as much as 15% following the announcement of the deal, before mostly rebounding in the following days. Investors were initially concerned about the company's ability to receive approval from regulators because of the unprecedented nature of the deal.

LendingClub CEO Scott Sanborn anticipates being able to complete the transaction in 12 to 15 months. That's faster than just applying for a straight bank charter, which can take between 18 and 24 months, but if the deal takes longer to complete or is not approved by regulators, LendingClub may not realize all of the benefits from the deal. Currently, LendingClub projects the acquisition to be add to earnings by the second year after closing. LendingClub has secured a temporary bank charter protection agreement in the meantime.

Becoming a bank holding company is by no means a simple process. LendingClub will now be scrutinized by regulatory bodies such as the Federal Reserve, FDIC and the Office of the Comptroller of the Currency, and possibly other agencies as well. According to a recent regulatory filing, LendingClub will need to create a financial and bank capitalization plan and may need to enhance its governance, compliance, controls and management infrastructure. All that regulation could be more difficult to navigate than many fintech followers believe. At the same time, LendingClub doesn't want to slow its ability to bring products to market quickly.

Radius Bank may technically be a community bank, but it operates more like a fintech. It used to be owned by the Carpenters Union of Massachusetts until the union sold the bank to a group of private equity investors in 2015. From there the strategy changed.

The bank is entirely digital and has no physical branch locations. Unlike traditional community banks, which are geographically focused, the bank gathers deposits from all over the country, and has made several partnerships with fintech companies.

The bank also operates its own peer-to-peer payments solution and a marketplace of curated and innovative personal finance offerings such as life insurance. Radius' expertise with fintech will allow for a much easier integration process with LendingClub on the back end, and also provide a talented management team that understands the complex web between banks, fintech and regulators.

According to LendingClub's investor presentation , the acquisition of Radius will result in about $80 million in additional annual income. The company will achieve $25 million in savings by eliminating bank fees it currently must pay to bank partners it uses to run its marketplace.

The rest of that $80 million will come from the lower-cost deposits from Radius. As a marketplace, LendingClub doesn't originate any of its own loans. It finds investors, matches them with borrowers and then uses third-party banks to originate those loans, which it then sells back to the investors. Those outside investors take on the risk and end up reaping the interest from the loan, while LendingClub makes money by charging various fees on the transaction.

With its own deposit base, LendingClub will reduce its weighted average cost of funds, the average cost of a company's various capital sources, from 4% to 1.8%, which will create a wider margin of profit. That's a huge move and not one easily achievable in today's rate environment, where rates have moved so little in the last decade.

Radius also comes with a number of business lines that LendingClub can potentially scale. For instance, 26% of Radius' loan portfolio is made up of good-yielding equipment financing and commercial & industrial loans. Also, Radius does not offer personal loans, so there are likely some good cross-selling opportunities across each company's customer base, depending on customer profile.

Will the deal get approved?

LendingCorp's stock rebounded after the initial tumble because investors realize that the company has a better chance of receiving regulatory approval than initially thought. Sanborn said following the deal that he has been in contact with regulators for more than a year.

Another point to consider is that the OCC, a regulatory body LendingClub will have to go through to obtain its national bank charter, seems to be fairly open to working with fintechs. The agency not only has an office of innovation, but also tried to create a special purpose charter that specifically allowed fintech companies to become banks. However, a federal court intervened and said the OCC did not have the authority to do so. Following the ruling, the OCC told CNBC  it "disagrees with the decision." If LendingClub can receive approval within 12 to 15 months, expect good things to happen to the company and therefore its stock price.