Please ensure Javascript is enabled for purposes of website accessibility
Log In Help Join The Motley Fool
Free Article Join Over 1 Million Premium Members And Get More In-Depth Stock Guidance and Research
By Lee Samaha - Feb 27, 2020 at 8:18AM

The stock has had a great run over the last decade, but its current valuation is getting very hard to justify given some disappointing earnings reports in recent quarters.

WD-40 (WDFC 0.64%) is certainly a stock that's had a stellar run in the last decade with a 480% rise, but it's far from clear that that run can continue in the future. In a nutshell, the stock's valuation appears to be assuming a growth trajectory that the company could struggle to meet. Let's take a closer look at the investment case for the stock and what you need to know before buying in.

Digging into the details, there are three factors that need to be considered: 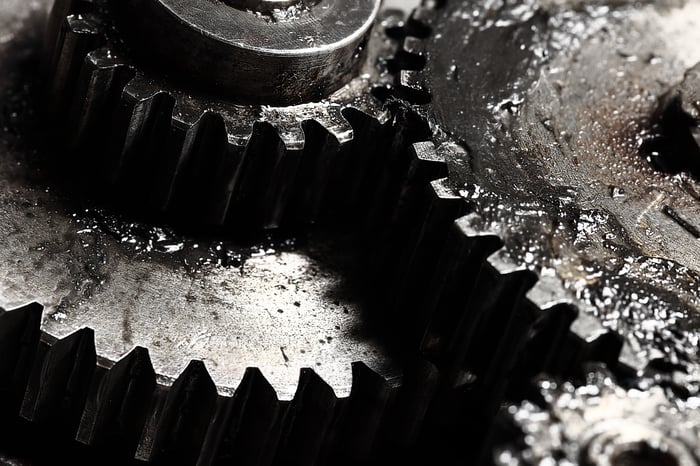 Starting with the obvious concern, the chart below shows how the price has risen in the last decade as led to the stock trading at valuations that are starting to look very heady. A current price to earnings ratio of 47 times earnings is expensive, and even if you accept the analyst consensus for EPS of $5.32 in 2021, the stock will still trade on 35 times 2021 earnings. 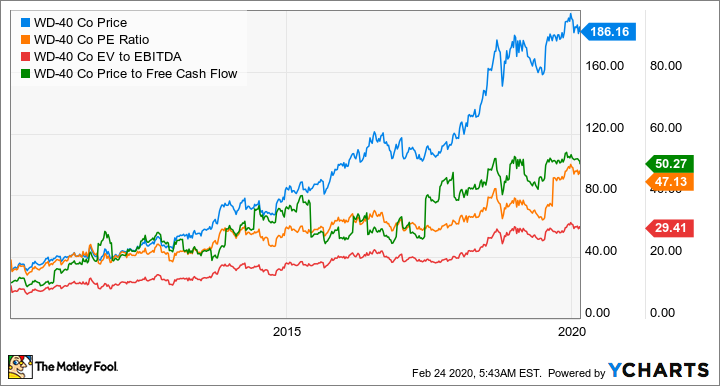 Clearly, to buy the stock, you have to take a glass half full approach regarding the company's growth prospects.

To be fair, the growth targets I'm going to outline now are clearly stated as aspirations by management and should not be seen as set in stone. Indeed, CEO Garry Ridge stated on the last earnings release: l" We are playing the infinite game which is why it's more important for investors to understand that our long-term strategic drivers are performing in-line with our expectations, than it is for them to be concerned about the performance of a particular market or segment in a finite period."

He may well be right, but the point that is when a stock is priced at nearly 50 times its trailing earnings, investors probably are assuming that the company's long-term growth aspirations are on track.

Unfortunately, if you do take a look at the performance of a market or segment, it becomes clear that WD-40 needs to improve performance. For example, here's a look at the targets and the compound annual revenue growth (CAGR) assumptions needed to get to there. As you can see below, there is a significant pickup in growth needed in its core WD-40 universal cleaning and lubricating product. It's a similar story with its WD-40 specialist line -- a market tailored toward trade professionals, but not one in which WD-40 has anything like the same reputation as with its core product.

WD-40's sales in the recently reported first quarter of 2020 came in at $98.6 million, representing a year-over-year decrease of 3% on a reported basis and slightly down when adjusted for currency -- a disappointing result. However, as Ridge usually outlines, WD-40's sales are subject to the timing of customer orders and promotional activity so they can fluctuate significantly from quarter to quarter.

With this in mind you might be willing to write off the quarter as a blip, but on closer inspection growth has been slowing in its Americas region for over a year, and it's a similar story with EMEA. Meanwhile, question marks will be raised over its Asia-Pacific region sales if a big growth number isn't reported in the second quarter as its coming up against a weak looking comparable in 2019. 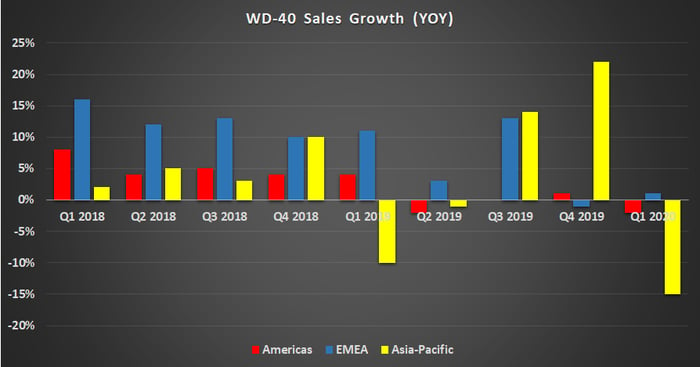 On a more positive note it's worth noting that WD-40's return on equity, or RoE, (net income divided by shareholders equity) is nearly 29%, implying that its very good and generating profits from its assets -- not least from its core degreasing and lubricating product. The so-called "blue and yellow can with the red top." The bullish case sees the company as being able to carry on growing profits, via its traditionally high RoE, through expanding its geographic footprint and the sales of its specialist products.

That said, its valuation appears to have a lot of optimism baked in that's not being supported by the same current product or regional sales trends that the company needs to justify its valuation. As such, investors will need to keep a close on sales trends in the next year or so before feeling fully confident in its medium-term earnings growth aspirations. Given the valuation, there's very little room for error.

When WD-40 Stock Slips and Slides, Should You Buy?

3 Companies I Love Whose Valuations Terrify Me

After a Great Run Last Year, Is WD-40 Overvalued?