The partnership would focus on developing treatments for neurological diseases.

Sangamo Therapeutics (SGMO 3.50%) announced after the bell on Thursday that it signed a partnership with Biogen (BIIB 3.40%) to develop a number of gene-editing treatments. The scope of the agreement would focus on neurological and neuromuscular conditions, with an initial focus on treating Alzheimer's and Parkinson's diseases.

Sangamo currently has 17 separate preclinical or early-stage clinical projects going on at the moment. One of these, ST-501, targets a class of neurodegenerative disorders known as tauopathies, which include conditions such as Parkinson's disease. Another candidate Sangamo is working on, ST-502, treats another class of neurodegenerative disorders known as synucleinopathies, which includes Alzheimer's disease. 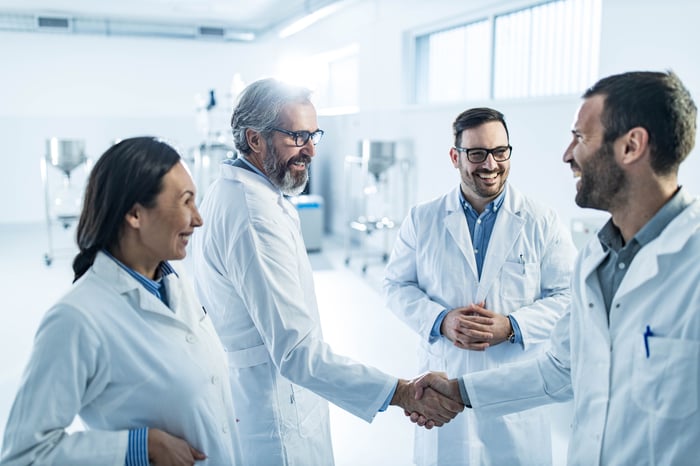 Under this new deal, Biogen would have exclusive global rights to market ST-501 and ST-502. The announcement also mentioned a third undisclosed neuromuscular disease that the two biotech companies are targeting, although it's anyone's guess at this point as to which condition it could be.

A major deal for both parties

The agreement stipulates that Biogen will pay Sangamo $350 million immediately, and Sangamo is eligible to receive up to $2.4 billion in milestone payments should its drug candidates prove successful.

Although Sangamo has a relatively large clinical pipeline in comparison to other gene-editing companies, most of them are still in preclinical stages of development. Only five of the 17 drug projects listed on Sangamo's website have entered early, phase 1/2 clinical trials. Most notable of these are its sickle cell disease and transfusion-dependent beta-thalassemia drugs, BIVV003 and ST-400, as well as the Fabray disease drug ST-920 and a hemophilia A treatment called SB-525.