Please ensure Javascript is enabled for purposes of website accessibility
Log In Help Join The Motley Fool
Free Article Join Over 1 Million Premium Members And Get More In-Depth Stock Guidance and Research
By Will Healy – Feb 27, 2020 at 7:36AM

An outbreak-related selloff would increase an already generous dividend yield.

Verizon (VZ -2.62%) finds itself overshadowed as a dividend stock. With 15 years of consecutive annual increases, it remains ten years away from dividend aristocrat status. Moreover, while its payout yield of more than 4.2% stands at more than double the S&P 500 average of 1.8%, peers with higher yields such as AT&T (T -2.48%) may receive more attention than this blue chip stock.

However, the panic caused by coronavirus should cause deep concerns for investors as businesses and consumers in China hunker down. This has created uncertainty for both the 5G rollout and the stock market at large. Given the pressure that could put on both Verizon and stocks in general, income investors may have an opportunity to buy a steady income producer at a low price.

How coronavirus could affect Verizon stock

Even if a company does not operate in China, telcos remain heavily dependent on the People's Republic for equipment. Not only could it disrupt the development of 5G equipment, it could also slow the production of 5G-compatible smartphones, according to Omdia Technology.

So far, Verizon has seen only minimal effects. Its stock only fell by 0.3% in a day which saw the Dow fall by more than 3.5%. This relative resilience bodes well for the wireless giant. However, Verizon's website has already begun to list 5G-compatible phones.Reports of delays in network launches could bring both consumer disappointments and stock sell-offs.

Still, coronavirus will run its course at some point, and activities in China will eventually return to normal. Moreover, a lower stock price will boost the company's dividend yield. This temporary pessimism could make Verizon stock a better buy, particularly when compared to its archrival, AT&T.

At first glance, investors may prefer AT&T to Verizon as a dividend play. AT&T's payout yield stands at about 5.4%, more than one percentage point above Verizon's yield. Moreover, AT&T has increased its dividend for 35 years, giving it the advantage of dividend aristocrat status. Furthermore, Verizon, AT&T, and T-Mobile are the only companies building 5G networks in the United States. This effectively makes these three companies an oligopoly. Over time, this market power will likely bolster both profits and stock prices as 5G grows in importance.

Nonetheless, when investors look below the surface, they may see the considerable risk that comes with AT&T's higher dividend yield. For one, the company's dividend payout ratio has risen to 108%. Since that percentage exceeds 100%, this means that the dividend is costing the company more than it earns in net profits. 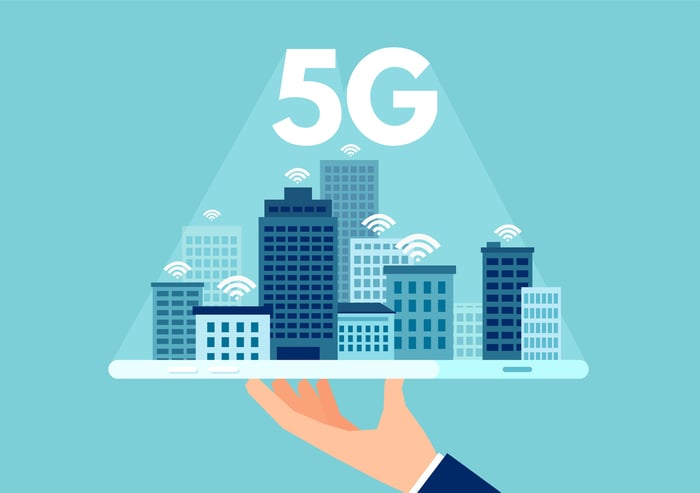 To be fair, net income includes some non-cash charges. Further, the $14.5 billion AT&T paid in dividends comes out to only about half of AT&T's free cash flow. For this reason, a dividend cut remains unlikely.

Furthermore, if AT&T merely suspended increases, it would cost AT&T its dividend aristocrat status. This would probably lead to further stock sell-offs, a painful blow to a stock that first achieved its current price in 1997! This stands in contrast to Verizon, a stock that has finally returned to its dot-com-bubble highs.

Moreover, Verizon is morphing into an all-in play on 5G. Conversely, AT&T has invested heavily in declining businesses such as DirecTV. Its WarnerMedia investment also puts AT&T in the highly competitive media content business. These investments and the high costs of building a 5G network have left AT&T massively in debt. That company now holds about $152 billion in long-term debt, along with an additional $11.4 billion that matures in one year. 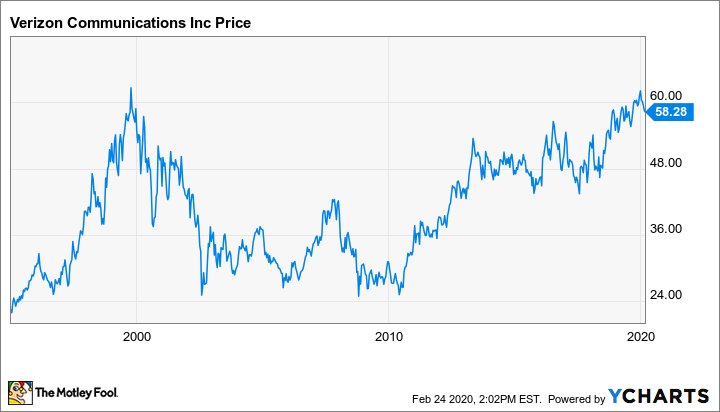 While Verizon may also face high buildout costs for 5G, its financials appear more stable. The dividend payout ratio of 52% claims a smaller portion of profits. However, it still leaves the company poised to pay for debt reduction or continued expansion of the 5G network. In 2019, Verizon spent $17.9 billion on capital expenditures, which includes 5G development costs and fiber deployments.

Verizon could also become a dividend aristocrat ten years from now if the annual dividend increases continue. Free cash flows for 2019 came in at $3.9 billion. Though that remains below AT&T, it provides the cushion needed to maintain increasing dividend payouts.

Moreover, thanks to its nearly exclusive focus on infrastructure, Verizon has not taken on massive debts to buy non-5G assets in recent years. The long-term debt now stands at $100.7 billion, with an additional $10.8 billion in obligations maturing in one year. AT&T has a slightly larger market cap than Verizon, about $274 billion for AT&T versus around $242 billion for Verizon. Still, with more than $50 billion less in debt, Verizon appears stronger financially.

Verizon has remained one of the more resilient stocks amid coronavirus fears. It saw a slight drop even amid a sell-off of more than 1,000 points in the Dow in Monday trading. This indicates that the outbreak will have less of an effect on Verizon stock. However, given the potential supply chain disruptions that come from the virus-related shutdowns, Verizon could still feel some of the effects.

In time, coronavirus will likely run its course and fade from the headlines. Consequently, Verizon stock should only see temporary effects from this crisis. As more consumers and businesses adopt 5G and profits rise, Verizon should produce a stream of increasing dividends that could eventually take it to dividend aristocrat status.