It's the first chewable tablet of its kind to treat heartworm disease, ticks, and fleas.

Zoetis (ZTS 1.44%) announced on Thursday that its new all-in-one parasite protection treatment for dogs had received approval from the U.S. Food and Drug Administration. Simparica Trio is a once-per-month chewable tablet that protects dogs from three prominent types of parasites common to canines, heartworm disease, fleas, and ticks.

Clinical studies testing Simparica Trio demonstrated 100% efficacy in preventing the onset of heartworm disease, as well as a 98.9% effectiveness in fighting existing tick infestations in dogs. Simparica Trio also has a 100% efficacy in killing fleas eight hours after the initial treatment. While the treatment isn't as certain for other types of parasites, tests have shown that it's also reasonably reliable in eliminating roundworms (99% effective) and hookworms (94% effective). 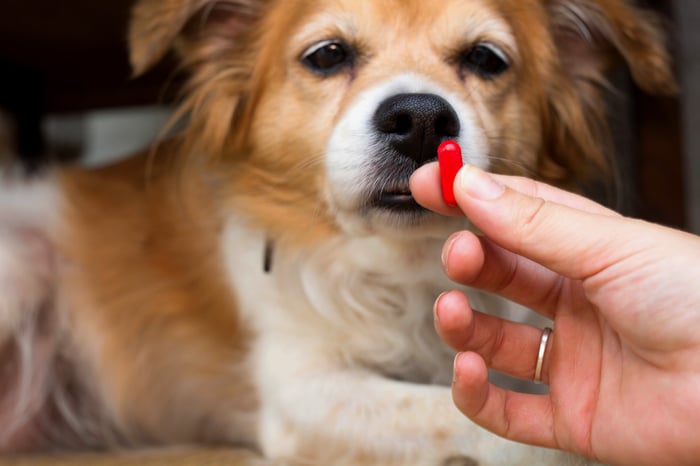 "Simparica Trio makes it easier for dog owners to follow their veterinarians' recommendations for parasite protection because it covers the most common parasites in just one convenient chewable," said Chris Adolph, a senior veterinary specialist at Zoetis.

Zoetis is the world's largest producer of veterinary medicines and pharmaceutical products for animals. Over the past 18 months, it received a number of additional approvals for parasitic prevention products to help cats and dogs. One of them is a treatment called ProHeart, which was approved on July 19 as a once-per-year injection to prevent heartworm disease in dogs. Before that, Zoetis received approval for Revolution Plus in November 2018, a 6-in-1 topical parasite protection treatment for cats and kittens.