Please ensure Javascript is enabled for purposes of website accessibility
Log In Help Join The Motley Fool
Free Article Join Over 1 Million Premium Members And Get More In-Depth Stock Guidance and Research
By Rhian Hunt - Feb 28, 2020 at 9:09AM

The famous fruit spread maker’s dog and cat chow portfolio may not be housebroken.

Once known mainly for its fruit spreads and peanut butter, The J.M. Smucker Company (SJM -0.04%) recently got into dog food, cat food, and pet treats in a big way. Smucker is going head to head with big brands like Purina to fill the food bowls of Fluffy and Fido across the globe. But pointed questions from analysts during its earnings call, the rather obscure answers provided, and disquieting details in its quarterly report might lead some investors to sniff out potential trouble.

In 2014, J.M. Smucker didn't have a single brand of pet chow anywhere in its lineup. Instead, its biggest category was coffee, with the rest of its portfolio made up of jams and jellies, peanut butter, baking products, canned milk, shortening, oils, and frozen snacks. In an apparent effort to rekindle fizzling growth, the company launched itself headlong into the pet food market in 2015.

Massive strategic changes, including both divestitures and acquisitions, followed. The move into pet food began spectacularly with a $5.8 billion purchase of Big Heart Pet Brands. While the deal included the brands Meow Mix, MilkBone, and Kibbles 'n Bits, it also came with unexpected headaches. Foods from the line were contaminated with the lethal drug pentobarbitol, killing several pets in 2016 and prompting an FDA investigation.

Smucker pushed ahead with its acquisitions and spinoffs. The corporate overview slides it published as part of its Oct. 9, 2018 Investor Day presentation contained two pie charts comparing the net sales for fiscal year 2014 (before the strategic transformation) and as planned for fiscal year 2019. The charts highlight the company focus on pet food and snacks, the biggest slice of the net sales "pie" by 2019: 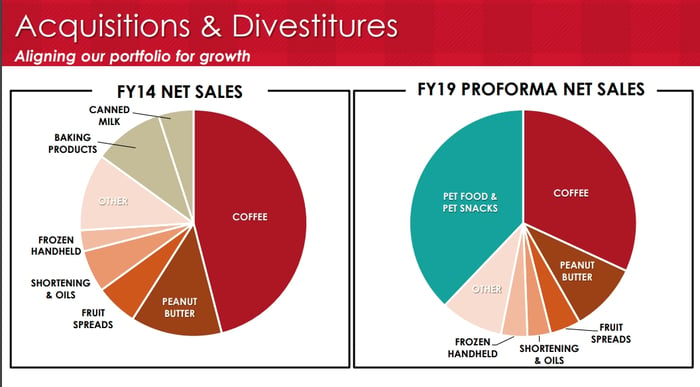 Data shows why the pet food market held enough allure for Smucker to commit so much effort and expense to entering it when casting about for a profitable new strategy. Studies of pet food sales show high potential for growth worldwide. In a report prepared by Transparency Market Research, analysts forecast a robust 6% CAGR (compound annual growth rate) from 2019 through 2029. This translates from current sales of $97 billion to projected decade-end sales of approximately $168 billion.

However, it's one thing to identify a rapidly growing market, and quite another to develop a successful large-scale entry strategy -- especially considering Smucker's lack of previous experience in feeding people's furry friends. 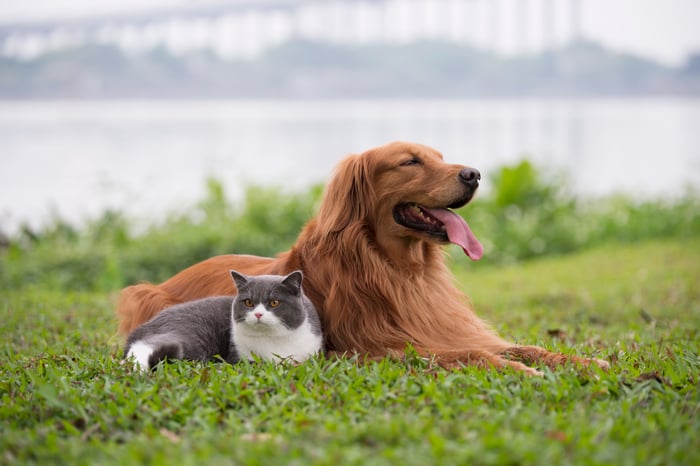 J.M. Smucker released its Q3 fiscal 2020 earnings report on Feb. 26, followed by its third-quarter earnings call the same day. The report paints a somewhat uncertain picture of the company's current position. The year-over-year comparison of quarterly results between 2020 and 2019 reveals a 2% drop in net sales, a 3% decline in adjusted gross profit, and a 50-basis-point fall in adjusted gross margin. Operating income shrank by 3%.

The report breaks down net sales by segment, enabling easy identification of the problem area: pet food, where net sales dropped by 5%. The largest segment profit came from the coffee category, which generated $189.5 million in profit from $558 million in sales, versus pet food's $146 million from $721 million in sales.

During the earnings call, President and CEO Mark Smucker noted most of the net sales decline resulted from "softness" in dog food, especially the premium Natural Balance brand and other top line brands. Natural Balance, in fact, generated a $52 million non-cash impairment charge during the quarter. In counterbalance to this, he observed that the MilkBone brand experienced growth in "the low double-digits," while cat food grew in the "low single digits."

Questions that should give you paws for concern

One analyst inquired specifically about the Natural Balance brand, pointing out that it was considered one of the strongest brands in Smucker's pet food portfolio when acquired. He expressed confusion about an ostensibly growth-driving brand instead requiring a considerable financial "lift" to bring it back into positive territory.

Another asked why the company was losing distribution of dog food, while a third inquired about the increased advertising spending needed to try restoring growth to pet food. Other questions included whether Smucker would cut pet food prices, and noting that Smucker often cited the excellent sales of MilkBone treats but frequently failed to report sales of pet treats as a whole, effectively focusing on a single reliably positive, but small, part of the sector while omitting "big picture" data.

Nearly every analyst asked probing questions about Smucker's pet food category, possibly indicating strong concerns about its performance. Mark Smucker and other executives responded by quoting positive cat food sales figures, and by assuring the analysts they would use "financial discipline," "portfolio rebalancing," "packaging architecture," and starting to "play offense" in the near future. The responses contain many buzzwords but few concrete details of how Smucker will turn pet food around, other than implications of simply throwing more money at the problem.

Smucker may have backed itself into a corner

The plain facts of the matter suggest that the analysts may be right to question J.M. Smucker's pet food strategy. The "transformational" shift into pet food has left the company spinning its wheels for the past five years, rather than producing the strong improvements expected.

Share prices, other than a brief spike immediately following the Big Heart Pet Brands acquisition, remain stubbornly around the same level they were at in early 2015, before the change began, and dropped below that level today. Trailing-12-month revenue was $7.4 billion in January 2016, and is currently $7.6 billion: an improvement, but hardly a complete transformation. Its 2019 annual EBITDA shrank 5.6% year over year; that figure has fallen every year since 2016.

Other than a mild gain in revenues, Smucker's fundamentals don't reveal substantial benefits from its heavy investment in pet food. In fact, it's possible to interpret the data as suggesting that pet food has worsened the company's position. Growth might still be possible in the still-popular coffee segment, among others, if not for the anchor of pet food weighing the company down.

Smucker is a newcomer to the pet food sector, facing powerful competition from large, established pet food producers. These include Purina, a brand of Nestle (NSRGY -0.39%), as well as Mars, Incorporated's brands such as Pedigree, Whiskas, Eukanuba, and many others. Together, Nestle and Mars control approximately 43% of the pet food market, making them formidable rivals to Smucker. In the Nestle Q4 2019 earnings call, CFO Francois Roger declared that Purina PetCare and beverages were the two chief drivers of organic sales growth during full-year 2019, with premium Purina brands leading the charge.

Nestle won't give up market share in this valuable sector without a fight, and the same is likely true of Mars, though the privately owned company keeps its strategic plans to itself. Smucker has now committed a large amount of its resources to a category that seems to be failing to drive growth as originally hoped, even after multiple years of effort. If the company has any solution beyond spending more money for pet food ads, it hasn't said so. The stock may be unappealing for new investment at the moment, and will likely remain so unless management launches a radically different strategy.