Please ensure Javascript is enabled for purposes of website accessibility
Log In Help Join The Motley Fool
Free Article Join Over 1 Million Premium Members And Get More In-Depth Stock Guidance and Research
By Reuben Gregg Brewer - Feb 28, 2020 at 7:00AM

This healthcare REIT is focused on a good niche, but is that enough to make it worth buying? Here's what you need to know.

The baby boomers are cresting into retirement. In a nutshell, that's the big reason to like healthcare real estate investment trusts (REIT) like Physicians Realty Trust (DOC 1.32%). The company's cute ticker symbol highlights exactly what this REIT owns: medical office buildings that house things like doctors' offices. This is a niche of the healthcare property market that has been increasingly in demand, with even the largest and most diversified players looking to build up their office portfolios. So is office specialist Physicians Realty a buy? Here's what you need to know.

Growing in a good subsector

Hospitals aren't the focus they used to be in the healthcare space. It is expensive to put someone in the hospital, especially when a service could be performed just as well in a smaller facility, or just in a doctor's office. Increasingly, in an effort to reduce medical costs, patients have been pushed out of the hospital into other venues whenever possible. To put a number on that, between 1994 and 2016 inpatient care fell from 72% of medical revenue to 52%. Outpatient revenue, meanwhile, increased 70%, going from 28% to 48% over that span. 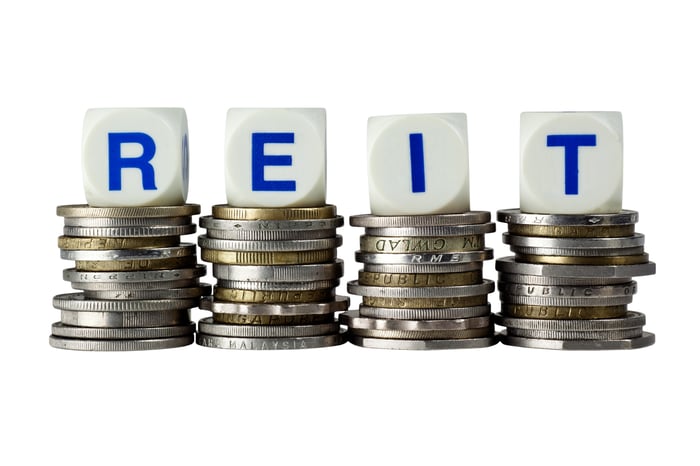 Although that type of growth can't go on forever, the basic trend hasn't changed, with more and more procedures performed outside of a hospital. For example, the Centers for Medicare and Medicaid Services (CMS) started allowing hip and knee replacements to be performed on an outpatient basis in 2019. In other words, these procedures can now be done in a medical office space. Hospitals aren't going away, but they are increasingly being reserved for the most important and delicate procedures.

That's the backdrop for real estate investment trusts like Physicians Realty, and it's a good one. The REIT has been expanding pretty quickly, too, using acquisitions to fuel its growth. At the time of its initial public offering in mid-2013 it owned 19 properties. At the end of 2019, just six years or so later, the REIT owned around 260 buildings. Physicians Realty highlights that its funds available for distribution increased nearly 40% between 2015 and 2019, easily beating office-focused peers. So this is clearly a fast-growing REIT.

However, there's a notable "but" here that dividend investors need to think about.

Although Physicians Realty highlights its funds available for distribution growth, it has only increased its dividend one time since its IPO. That increase was a tiny 2.2% in 2017. The portfolio has been expanding at an impressive clip, but that hasn't translated into a dividend growth story. The yield, meanwhile, is around 4.5%. Compared to the S&P 500 Index, that's pretty generous, but more established and diversified healthcare REITs have similar or higher yields. Unless you are specifically looking to focus on medical office buildings, there are some very good alternatives to Physicians Realty. (For reference, highly diversified healthcare REIT bellwethers Welltower and Ventas have yields of 4.3% and 5.3%, respectively.)

Which brings up valuation. Physicians Realty's price to funds from operations (FFO), which is like a price-to-earnings ratio for an industrial company, is likely to be around 20 times based on 2019 FFO (it has yet to report fourth-quarter 2019 results, so the third quarter was used as a run rate for that math). That's a pretty steep figure for a REIT that hasn't provided investors with any dividend growth to speak of. The last six months have been a key driver here, with the stock up 12% as of Thursday's close while the broader REIT sector, as measured by Vanguard Real Estate ETF, was down about 2%. (Welltower and Ventas were lower by 15% and 24%, respectively.)

At this point it looks like Physicians Realty is pretty expensive, meaning that value investors should probably look elsewhere. Now add in the dividend yield, which doesn't particularly stand out from other options in the healthcare space, and a dividend that has shown little to no growth over time. Most investors are unlikely to find this REIT all that attractive today.

Better options are out there

Physicians Realty Trust is a perfectly fine REIT, but it is hardly an industry leader. There are things to like, like its portfolio growth and focus on medical office buildings. However, most investors looking at the healthcare space would probably be better off investing in a larger, more diversified business (like Welltower or Ventas) that is increasingly focusing on medical office space and that has a much longer history of success behind it. Physicians Realty Trust's positive points just aren't enough to offset the negatives at its current price.