Please ensure Javascript is enabled for purposes of website accessibility
Log In Help Join The Motley Fool
Free Article Join Over 1 Million Premium Members And Get More In-Depth Stock Guidance and Research
By Rachel Warren - Feb 28, 2020 at 11:01AM

With high hopes for the approval of its blockbuster Alzheimer's drug, aducanumab, is now a good time to scoop up Biogen shares?

Biogen (BIIB 1.27%) had investors more than a little concerned in 2019. The company's efforts to win approval for its highly anticipated Alzheimer's medication, aducanumab, were met by ongoing regulatory snags, forcing the company to terminate and reboot the drug program. In March of last year, shares dropped by roughly 30% after the company threw in the towel on two different clinical studies of the drug.

Analysts have long projected aducanumab will be a massive source of sales growth for Biogen if it ever hits the market, with some estimating that the drug could bring in revenues upwards of $10 billion. To put those numbers in perspective, Biogen's total revenue in 2019 was just over $14 billion. 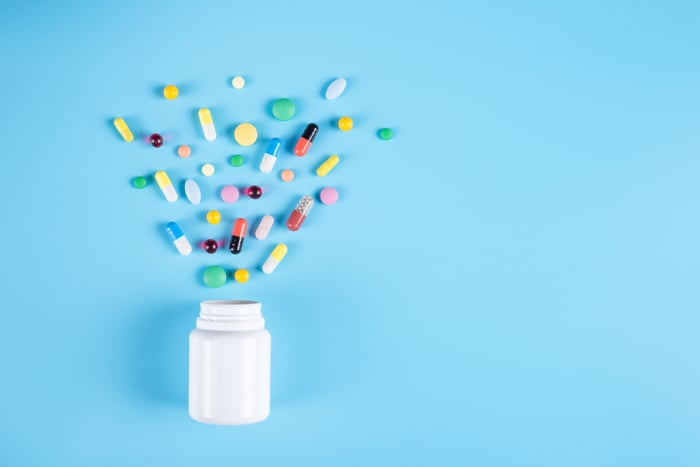 While the company currently has a few blockbuster products on the market, such as its spinal muscular atrophy medication Spinraza and MS drug Tecfidera, these drugs are facing increased competition in the biopharma sphere. In short, aducanumab is still largely viewed as the goose that could lay the golden egg for Biogen.

If you've been following Biogen stock over the past year amid the company's struggle to get the go-ahead for aducanumab, you might be wondering if there is a light at the end of this tunnel.

Aducanumab is a monthly treatment dispensed to patients via IV. The drug is designed to fight Alzheimer's by removing plaque that could otherwise compromise tissue and cell health in the brain. While aducanumab is far from a cure, it could be incredibly effective when used alongside other therapies.

Biogen has consistently hit roadblock after roadblock in its efforts to get aducanumab approved and on the market. At the end of March 2019, Biogen stated that it was abandoning development off the drug after two failed phase 3 Alzheimer's trials. The company sent shock waves through the biotech community in October of last year when it suddenly announced it was relaunching efforts to win FDA approval of the drug.

Biogen explained that the study results for the first defunct trial, Emerge, actually showed the drug to be effective when administered in high quantities to patients over an extended period. It also maintained that the second study had failed because not enough patients were administered the larger dose for a sufficient period of time, hence fueling the decision to move toward gaining FDA approval once more. The company is expected to enter its FDA filing within the early part of 2020.

Biogen shares reached an all-time high in 2015, only to drop from that point by roughly 40% over the trailing twelve months. Since then, the company's stock movement has been heavily influenced by the aducanumab drama over the past year. When the company announced that it was stopping all development of aducanumab in March 2019, shares dropped by over 30 percent, and only started to trend back upwards when Biogen said it was relaunching trials last fall.

In spite of the somewhat bumpy ride Biogen experienced for most of 2019, things really started to look up in Q4, so much so that the earnings for the last three months of the year exceeded estimates. The company amassed earnings just under $4 billion in Q4, for a total year-over-year increase of 4%.

Looking at 2019 as a whole, earnings per share cleared estimates of $33.20 to reach total earnings of $33.57 per share. Revenue grew almost 30 percent by the end of December 2019 from the year before, for final annual earnings of $14.4 billion. Analysts had estimated that revenue for the year would be about $14.2 billion.

In Biogen's Q4 earnings call, Chief Executive Officer Michel Vounatsos stated the following, "We are inspired by what the positive implications of the aducanumab data may mean for patients, physicians and the broader scientific community, who have been waiting decades for a therapy that can reduce the clinical decline of Alzheimer's disease. We are actively engaging with the FDA as well as regulators in Europe and Japan, and we look forward to completing a regulatory filing in the US as soon as possible...there has been important progress related to the redosing study, as we have successfully submitted the protocol to the FDA, and we are currently working with the sites and ethics committees toward study initiation."

The future of aducanumab remains uncertain but hopeful. Given the more positive outlook and data refresh Biogen has assigned to the drug's clinical trials, it may very well be just a matter of time before aducanumab gains FDA approval. If the drug does get approved, it would mean billions of dollars in additional revenue for Biogen and more than a few happy investors.

In fact, the Oracle of Omaha himself has already bought up almost $200 million of Biogen shares through multinational conglomerate Berkshire Hathaway (BRK.A 1.66%) (BRK.B 1.71%).

It's not overstating the situation to say that aducanumab could make or break Biogen's performance in the year ahead. If you're in it for the long-run and don't mind taking a risk now for a potentially massive reward later, Biogen looks like a solid pick to buy and hold.