Fear of COVID-19 means fewer tourists are shopping, but TJX and Ross will benefit from popularity with local customers.

The novel coronavirus outbreak represents a threat to retailers' earnings in the current quarter as tourists are kept from traveling, stores are temporarily closed, and supply chains are interrupted. Whether future quarters are at risk will depend on the outbreak's duration. In the meantime, investors seeking retailers that might fare better than their peers in this time of volatility should have a look at TJX Companies (TJX 5.13%) and Ross Stores (ROST 4.80%).

The two off-price retail giants don't have stores in China, where coronavirus (which spreads the disease COVID-19) originated. Instead, they rely on sales in the United States. TJX, which operates TJMaxx, Marshalls, and Homegoods, makes 76% of its revenue in the States, according to the company's 2018 annual report. The remaining percentage is made primarily in Europe and Canada. Of the company's 4,306 stores at the end of fiscal 2019, more than 3,000 of them are located in the United States. As for Ross, it operates its more than 1,700 stores -- Ross and dd's DISCOUNTS -- in the United States and the U.S. territory of Guam.

So TJX and Ross don't have to worry about closing stores or quarantined employees missing work, both possible problems for any retailer with a presence in China in recent weeks. 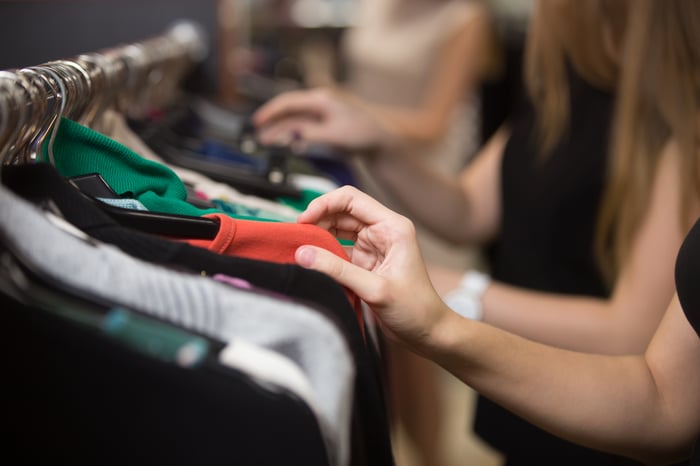 Where locals live and work

TJX and Ross also benefit from where they are located within the U.S. The companies' stores are usually found in outdoor shopping centers in the heart of where locals live and work. Their presence in communities, close to the grocery store or popular coffee shops, makes them a destination for residents. This reliance on locals instead of on tourists may help revenue at a time when quarantines keep travelers at home.

While these two factors strengthen the argument for buying TJX and Ross now, both stocks are a long-term play. Here's why: Their earnings have shone compared to those of department stores, which have struggled in recent times. In the fiscal fourth quarter of 2020, TJX beat analysts' estimates for earnings per share as well as its own guidance. Ross, which has surpassed analyst profit forecasts for the past four quarters, reports earnings on Tuesday, March 3. The focus on bargains has helped TJX and Ross stay ahead of traditional retailers. About 73% of people who shop at off-price retailers prefer them to other stores, a report by the International Council of Shopping Centers shows. Besides the price factor, shoppers also appreciate the unexpected discoveries and originality of products, according to the report.

Of course, TJX and Ross aren't immune from all potential coronavirus issues. U.S. cases are growing and have now reached nearly 90. Coronavirus could spread further, but the country has had time to prepare, so it's possible health authorities may be able to limit its progression. And the situation in China still presents a degree of risk. TJX and Ross, like their peers, source some goods from China, so supply might be disrupted if the outbreak deepens. Even considering these factors, TJX and Ross have what it takes to weather the storm better than rivals who depend heavily on China.

Shares of TJX and Ross have lost 3.1% and 6.9% this year, respectively. Wall Street expects 18% upside for TJX and 13% upside for Ross for the year. Limited exposure to China will at least partially shield the earnings of these consumer discretionary companies in the current quarter. Add to that a solid earnings track record and U.S. shoppers' love for bargains and you've got two retail shares to hold on to for the long term.