Please ensure Javascript is enabled for purposes of website accessibility
Log In Help Join The Motley Fool
Free Article Join Over 1 Million Premium Members And Get More In-Depth Stock Guidance and Research
By Reuben Gregg Brewer - Mar 2, 2020 at 8:13AM

B&G Foods operates in the boring packaged food space, but it is far from a boring company. Is the fat dividend yield worth the risk?

B&G Foods (BGS -2.79%) has a huge 14% dividend yield, which might at first sound enticing when you consider that the company operates in the fairly boring packaged food business. But there's a lot more to understand about this unique, high-yield stock before you jump aboard. Here's a quick look at the important facts.

B&G's business approach is interesting. It tends to buy brands from other companies, and then spends some time, energy, and money to revitalize them. Often this means acquiring unloved assets from larger packaged food companies that are in desperate need of attention. For example, the company bought the well-known breakfast brand Cream of Wheat from Kraft (now a part of Kraft Heinz (KHC -0.47%)) in 2007. B&G quickly introduced new innovations (like new flavors) that Kraft hadn't bothered trying. It wasn't rocket science, but for much larger Kraft, Cream of Wheat was simply too small to garner management's full attention. At B&G Cream of Wheat was a much bigger deal, and worth putting some money behind. 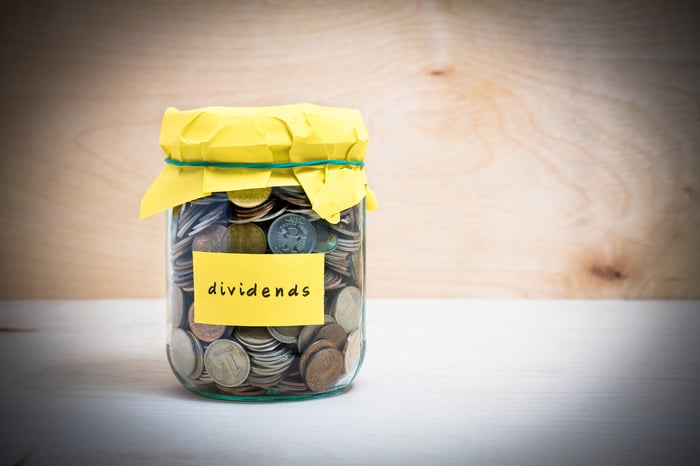 B&G also buys small independent brands as well, like Pirate's Booty or the recently added Farmwise. In cases like this, B&G can integrate a small brand into its distribution network and product lineup to expand the brand. Again, at relatively small B&G, these brands are given the love they need to thrive. In the case of Pirate's Booty, B&G was able to turn it around and sell it to Hershey's in 2018 after roughly five years. This deal shows that B&G is adding value to brands -- it bought Pirate's Booty for $195 million and sold it for $420 million. Going into the Farmwise deal, B&G is hoping to pair it with its Green Giant brand (bought from General Mills (GIS 0.49%) in 2015) so it can introduce new products.

This approach is a little like a private equity model, just handled in the public markets. It's very interesting -- B&G is, basically, finding gold in other companies' trash. Anyone with a value investing bent should want to take a closer look.

B&G's business model is pretty straightforward, but there's one big problem: leverage. In order to buy all of these brands, B&G has to have the cash to consummate the deals it inks. But at a roughly $1 billion market cap, it isn't a huge company with easy access to money. And that fat dividend yield means that selling stock is a very expensive way to raise capital. Generally speaking, the company has favored issuing debt.

At this point, B&G's financial debt to equity ratio is a massive 1.7 times or so. For comparison, ultra-conservative Hormel Foods' ratio is 0.01. That's a standard that few food companies can match, but even General Mills, which just took on a big acquisition of its own, comes in at a much lower 0.4 times or so. A key difference of note: General Mills quickly went to work reducing its leverage, which was over 0.6 times right after it bought pet food company Blue Buffalo in 2018. B&G's leverage has just kept heading higher over the last five to seven years. 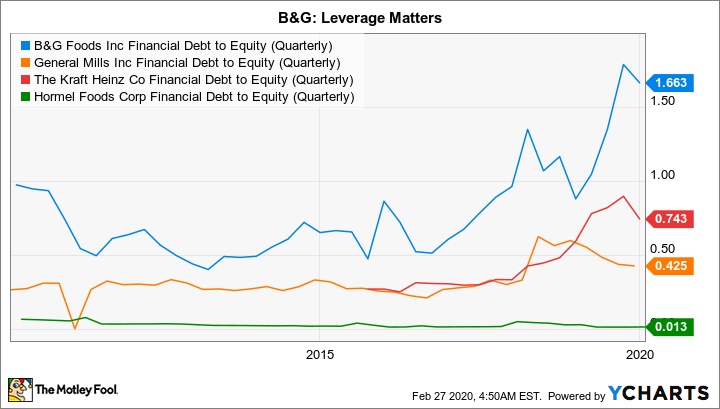 In fact, B&G's financial debt to equity ratio is roughly twice that of Kraft Heinz, which just cut its dividend to preserve cash while it tries to get its business growing again. Which brings up the not-so-subtle point that sales in B&G's base business (which pulls out the impact of acquisitions and divestitures) fell 1.4% in 2019, driven by volume declines. So B&G isn't exactly hitting on all cylinders today. Excessive leverage, meanwhile, is one of the key warning signs that a dividend could be at risk of a cut.

Two other important warning signs are interest coverage and payout ratios. On these points B&G is also showing signs of trouble. The company only covers its interest expenses two times over. Compare that with Kraft Heinz at three times and General Mills at five times, and you start to see the problem. Meanwhile, B&G's payout ratio and cash dividend payout ratio, which looks at dividends relative to free cash flow, are both over 100%. To be fair it has long operated with an elevated payout ratio. But add in the increasing leverage profile and tight interest coverage, and the company's ability to sustain its dividend looks increasingly tenuous.

Not worth the dividend risk

B&G's business of taking unloved brands and giving them the attention they need is enticing. However, the leverage management has chosen to take on is a problem. The dividend doesn't really look very safe at this point. Dividend-focused investors would be better off stepping aside here. That said, more adventurous investors looking for a good bargain might want to keep the stock on their watch lists. If B&G does cut its dividend, there might be an attractive value opportunity here. Just don't go in thinking this is a safe food stock -- it really isn't.