Despite a mixed fourth quarter, the company is in a strong position to keep growing.

Walmart (WMT -0.02%) released its fourth-quarter earnings report recently, and some numbers missed analyst estimates. But even though it wasn't perfect, the company delivered on several key objectives that point toward continued growth, specifically in e-commerce -- and within that, grocery delivery.

Here are three reasons why even with a few kinks in its earnings release, Walmart is still a great stock to have in your portfolio. .

A company as big as Walmart has the resources to make up for a slow start in a key area, and that's what the retail giant has done in e-commerce. After pouring billions of dollars into growing its online retail operations, including the acquisition of Jet.com in 2016, Walmart's efforts are paying off. 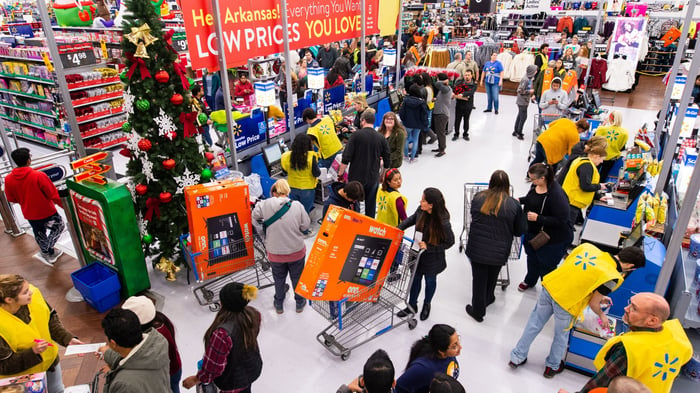 The downside to this very good move is that gross margin is pressured. With the high expenses involved in rolling out top-notch e-commerce services along with setting prices in line with its mission as a discounter, earnings are bound to get squeezed, even if revenue is high. However, the company noted that year-over-year, the gross margin rate improved.

In the fourth quarter, e-commerce sales grew 35%, and it has seen similar or higher growth numbers every quarter for several years. The company has said that online sales account now for about 10% of its business.

E-commerce is still a growing trend, and Walmart is making the necessary efforts to its business to keep its top spot in retail. One study found that 80% of online customers prefer free shipping over fast shipping, and Walmart is offering both, matching Amazon.com's services.

Despite intense competition, sales are growing

Walmart is growing its total revenue, with a 2.1% increase to $141.7 billion and a 1.9% increase in comps. It expects a 3% increase for 2021 with at least 2.5% in U.S. comps (excluding fuel). The company admitted to internal errors that contributed to softness in holiday sales, but overall didn't greatly affect the fourth-quarter total, which benefited from e-commerce strength and grocery.

While competition for shoppers' dollars remains fierce, Walmart is doing what it takes to compete both online and in its stores. One of Walmart's advantages is its storefronts, as customers are increasingly looking for an omni-channel experience. Walmart offers strong omni-channel options with digital capabilities, storefronts, free-shipping perks, and buy-online-pick-up-in-store options. So while Walmart is making gains on the e-commerce front, Amazon is struggling to get a stronger footprint, which Walmart already boasts.

Its grocery business is strong

Food is a big business. According to the USDA, Americans spend nearly 10% of their disposable income on food products, and just like the rest of retail, it's moving online. The Food Industry Association and Nielsen's latest report found that 49% of U.S. customers have purchased a packaged food product online, and it expects this number to grow to 70% over the next five to seven years.

Only 7% of retailers who responded to the survey said they were prepared to meet demand for e-commerce groceries. Walmart, on the other hand, offers a powerful grocery program with free delivery (for an annual fee) and an unmatched infrastructure. Getting food, especially perishables, to customers all over the country is not a simple feat, but Walmart's network of stores allows it to reach almost every area quickly. Walmart excels with significant vendor relationships and a strong logistics network, plus it has the cash to work with while getting it right. Even losing money on the venture, as Amazon did for a long time, is worthwhile as the blue-chip company gains market share and tweaks its operations.