Please ensure Javascript is enabled for purposes of website accessibility
Log In Help Join The Motley Fool
Free Article Join Over 1 Million Premium Members And Get More In-Depth Stock Guidance and Research
By Leo Sun - Mar 3, 2020 at 9:16AM

Which Amazon-resistant retailer is a safer investment during a market downturn?

Costco (COST 0.52%) and Walmart (WMT 1.32%) are both resilient retailers that withstood Amazon's (AMZN 3.60%) assault as other brick-and-mortar retailers withered. Over the past decade, Costco's stock surged nearly 400% as Walmart's stock doubled.

Both retailers leveraged their scale to stay relevant. Costco's wholesale model enabled it to sell products at bulk rates while propping up its margins with membership fees. Walmart, which owns Costco's rival Sam's Club, matched Amazon's prices and turned its stores into a fulfillment network for online deliveries and pick-ups.

However, both stocks recently dipped along with the broader market amid concerns about the coronavirus crisis, the 2020 election, and other macro headwinds. Should investors accumulate shares of either retailer during the market downturn?

The key differences between Costco and Walmart

Costco generated 98% of its revenue from product sales last quarter, and just 2% from membership fees. However, its membership fees accounted for 95% of its net profits.

Walmart currently operates about 11,500 stores under 56 banners across 27 countries, and e-commerce websites in ten countries. Sam's Club has a presence comparable to that of Costco, with nearly 600 locations in the U.S. and over 200 international stores.

Costco generated much stronger revenue growth than Walmart over the past decade, for two main reasons: Its smaller footprint gave it more room to open new stores (especially overseas), and its sticky membership ecosystem gave it room to raise its annual fees twice over the past nine years. 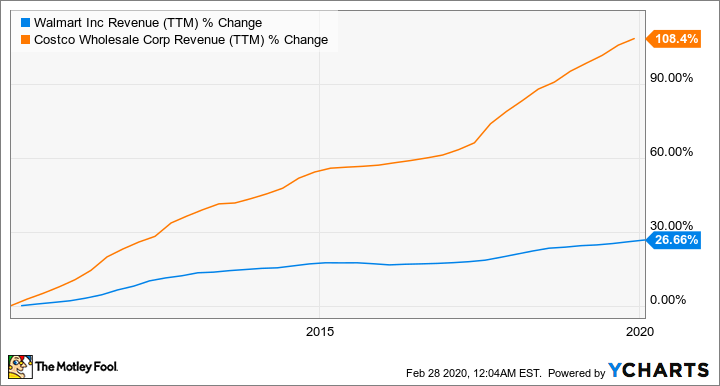 Walmart struggled to counter Amazon for several years before CEO Doug McMillion took the reins in 2014. McMillion implemented an aggressive turnaround plan for Walmart by bolstering its e-commerce capabilities, renovating its stores, opening smaller-format locations, and raising wages for its employees.

Costco didn't implement any aggressive spending plans like Walmart. Instead, its streamlined membership model churned out steady profits and allowed it to open new stores. As a result, Costco consistently generated stronger earnings growth than Walmart. 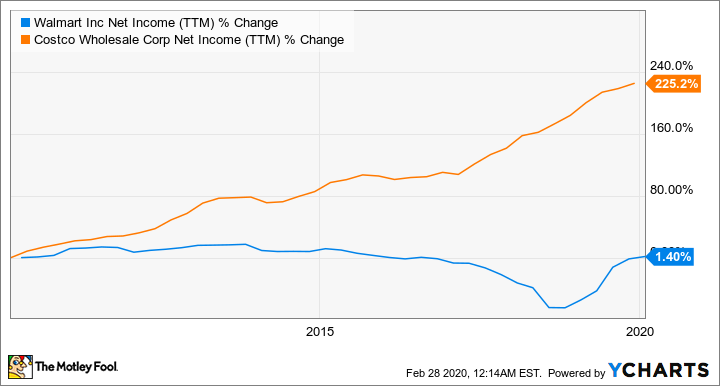 Wall Street expects Walmart's revenue and earnings to rise 3% and 4%, respectively, this year. Costco's revenue is expected to rise 7%, with 8% earnings growth. However, investors should take those forecasts with a grain of salt, since they don't fully account for the coronavirus outbreak in China, where both retailers operate stores.

Walmart operates 404 Supercenters, 26 Sam's Clubs, and eight Neighborhood Markets in China. It also owns 333 stores in Japan, which is struggling to contain an escalating outbreak. Costco operates one store in mainland China, 26 stores in Japan, and 16 in South Korea -- a market which Walmart failed to crack.

Those valuations suggest that both stocks are a bit frothy relative to their growth estimates, which could be reduced if the macro headwinds worsen. I believe Costco's business model is stronger than Walmart's, but I think Walmart's lower valuation and higher dividend make it a safer stock in a wobbly market.