Please ensure Javascript is enabled for purposes of website accessibility
Log In Help Join The Motley Fool
Free Article Join Over 1 Million Premium Members And Get More In-Depth Stock Guidance and Research
By Royston Yang - Updated Mar 3, 2020 at 5:31AM

The decline feels like an overreaction for the diversified hotel conglomerate.

Shares in hotel chain Marriott International (MAR 2.33%) declined by 11.5% in February, according to data provided by S&P Global Market Intelligence. This pretty much erased all the gains that the stock chalked up during 2019, and it's now back at the same level as a year ago.

Marriott is one of many companies within the hospitality industry that are poised to get hit by the negative impact generated by the COVID-19 outbreak. Investors should note that the COVID-19 situation is still dynamic and fluid, but it has made stocks like Marriott much cheaper as it continues to disrupt businesses and industries. 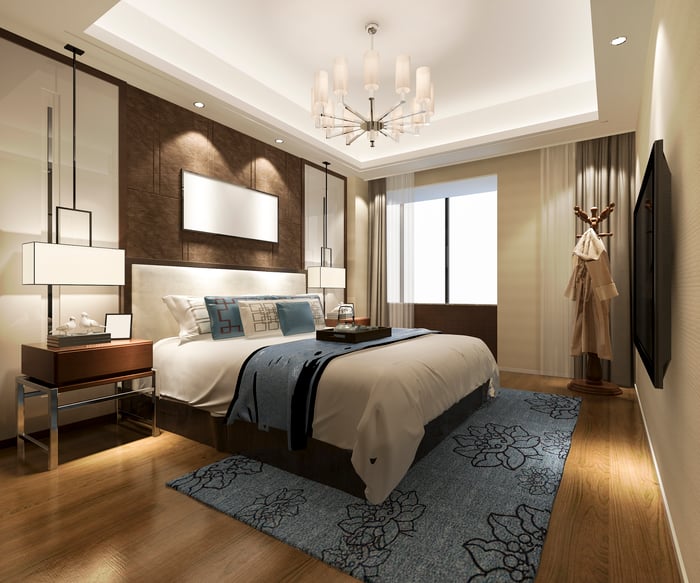 It was just over a month ago that Marriott announced its seventh consecutive year of organic worldwide room signings, with 815 agreements signed that pushed its global pipeline to around 515,000 rooms as of year-end 2019. As of the end of 2019, Marriott's worldwide system consisted of 7,300 properties with roughly 1.38 million rooms in 134 countries and territories.

Within the same announcement, Marriott also estimated the COVID-19 impact to be around $25 million in lower fee revenue per month. This adds up to around $300 million for a full-year impact, which makes up only 1.4% of Marriott's total 2019 revenue of $20.9 billion.

However, during the company's fourth-quarter fiscal year 2019 conference call, CEO Arne Sorenson remarked that based on what was observed in the first two months of this year, diluted earnings per share could be negatively impacted by $0.14. Comparing this with full-year 2019's adjusted earnings per share of $5.92, the $0.14 represents a slightly larger but still fairly immaterial 2.4% hit.

Though the financial impact from the COVID-19 situation remains highly uncertain, what is certain is that Marriott has a full range of hotels located all across the world. This diversity in the company's properties helps to mitigate the risks of specific countries' travel curbs, thereby allowing the business to buffer against any short-term financial and operational impact.

From the computation above, the earnings impact is just 2.4%, but the share price reaction was much larger than that at 11.5%. Unless the situation deteriorates much more dramatically from here on, it would seem that Marriott's stock price decline is unjustified.