Please ensure Javascript is enabled for purposes of website accessibility
Log In Help Join The Motley Fool
Free Article Join Over 1 Million Premium Members And Get More In-Depth Stock Guidance and Research
By Asit Sharma - Updated Mar 4, 2020 at 7:45AM

The meat substitute manufacturer's stock -- even after recent setbacks -- continues to command a huge premium in the market.

Between a disappointing earnings report and a historically bad string of daily sessions in the U.S. stock market, alternative-meat provider Beyond Meat (BYND 7.18%) lost roughly a quarter of its market value last week. Nonetheless, incorporating a 7% bounce back on Monday, March 3, shares remain about 385% above their May 2019 IPO pricing of $25.

Of course, volatility has been a hallmark of Beyond Meat ever since its IPO debut, as investors have by turns appeared smitten with its enormous potential to disrupt the $1.4 trillion global meat market, and more realistic about its prospects in an increasingly crowded field of plant-based meat substitute manufacturers.

Beyond Meat's fourth-quarter earnings charted year-over-year revenue growth of 212%, to $98.5 million. The top-line expansion scaled gross margin from 25% to 34% and also helped decrease the company's year-over-year quarterly net loss from $7.5 million to $0.5 million.

Yet shareholders blanched at Beyond Meat's 2020 outlook, as revenue growth is slated to decelerate this year (albeit at a still-blistering projected range of 64% to 71%), resulting in a projected top line of between $490 million and $520 million.

More pertinently, despite the higher revenue, 2020 gross margin is slated to come in between 33% and 35%. At the midpoint, that's static against current gross margin. And adjusted EBITDA (earnings before interest, taxes, depreciation, and amortization) as a percentage of net sales won't expand either, but it will remain "approximately equivalent to 2019 levels, as the company anticipates accelerated investments in marketing, R&D and international expansion initiatives in 2020," the company stated in its 8-K filing. 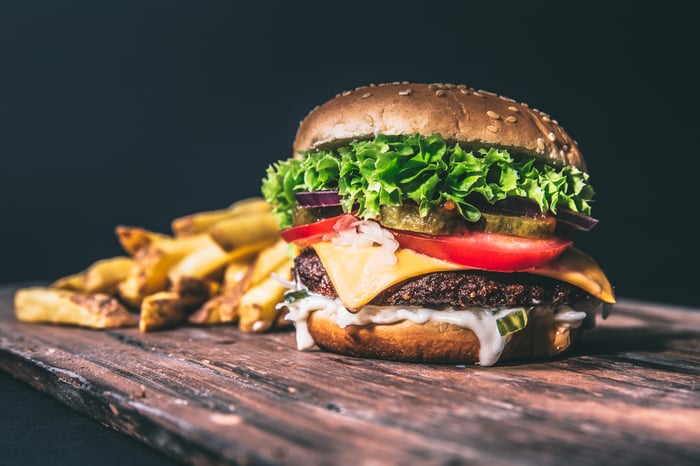 In other words, as founder and CEO Ethan Brown explained during the company's earnings conference call, Beyond Meat is seeking aggressive global growth, "even if this comes at the expense of near-term profit and margin expansion."

This growth is predicated on scaling supply by launching localized production in targeted geographic regions. Brown relayed that Beyond Meat expects to open a new co-packing facility in the Netherlands this quarter, and it's aiming to begin production in Asia by the end of 2020 -- though the COVID-19 epidemic could alter the timing of this goal.

Expansion isn't the only headwind crimping profits and cash flow. As I discussed on a recent Motley Fool Industry Focus podcast with analyst and host Emily Flippen, while the company's most visible rival may be privately held Impossible Foods, it's facing stiffened competition from large, institutional food providers such as Cargill and Tyson Foods, which are launching their own meatless products into retail channels.

Given its relative lack of profitability, earnings-based metrics do little to illuminate Beyond Meat's market pricing. We can instead utilize its price-to-sales (P/S) ratio as a reasonable valuation metric. And for the sake of comparability, the beverage industry offers some cases that parallel Beyond Meat's early disruption of an established market.

For example, like Beyond Meat, Starbucks was once an early mover in an extremely large total addressable market (TAM) -- the global coffee cafe and retail market. Starbucks currently trades at 3.4 times forward one-year sales and reveals a glimpse of what Beyond Meat's P/S ratio might look like in several years when it matures.

Monster Beverage, a pioneer in the energy-drink business, provides us with an example of a company that has seen torrid growth. Since it began focusing on the energy-drink market in 2012, Monster has seen its brands explode in volume, and the company now boasts an impressive 30% market share among energy drinks in the United States. Monster currently trades at 7.3 times sales.

Luckin Coffee, which has introduced an app-driven, cashier-less coffee experience in China and is notable for its ubiquitous, extremely small cafes, has generated triple-digit revenue growth (like Beyond Meat) in recent quarters. It's also newly public, having made its debut on the public markets in July 2018. Luckin is expanding beyond China to increase its TAM; it currently sports a forward P/S ratio of 5.1.

As for Beyond Meat, the volatile growth stock trades, as of this writing, at 11.4 times forward 2020 sales. This is the kind of multiple you'd usually associate with high-gross-margin, SaaS (software-as-a-service) tech outfits.

Given the company's slowing revenue growth, its relatively meager gross margin, and no plans to improve EBITDA margin as it fights for market share, Beyond Meat's share price in relation to its net sales should probably fall closer over time to that of fellow consumer-goods innovators Luckin Coffee and Monster Beverage.

By this logic, a P/S multiple of 5 to 7 times sales appears reasonable in the intermediate term. That implies a stock price for Beyond Meat in a ballpark range of $45 to $65 -- quite below present trading levels.

Of course, more breakthroughs in its pea protein research, leading to additional products that are ever closer in texture and taste to animal meat, could sustain Beyond Meat's dazzling market premium. Or perhaps sales will accelerate past management's 2020 framework, justifying current pricing.

I don't predict that this stock will descend all the way to the range I've described. But as realities of growth and competition set in, I won't be surprised if a more moderate price-to-sales ratio manifests in these shares over the next few quarters.