Please ensure Javascript is enabled for purposes of website accessibility
Log In Help Join The Motley Fool
Free Article Join Over 1 Million Premium Members And Get More In-Depth Stock Guidance and Research
By Rick Munarriz - Mar 4, 2020 at 8:30AM

A lot has happened at the park in a little more than 20 months. Toy Story Land opened in the summer of 2018, a nod to Pixar's first full-length feature franchise. Star Wars: Galaxy's Edge came along last year, an ambitious 14-acre expansion that opened in two phases between August and December. Mickey & Minnie's Runaway Railway becomes the third and final piece of the revitalization of Disney's Hollywood Studios. 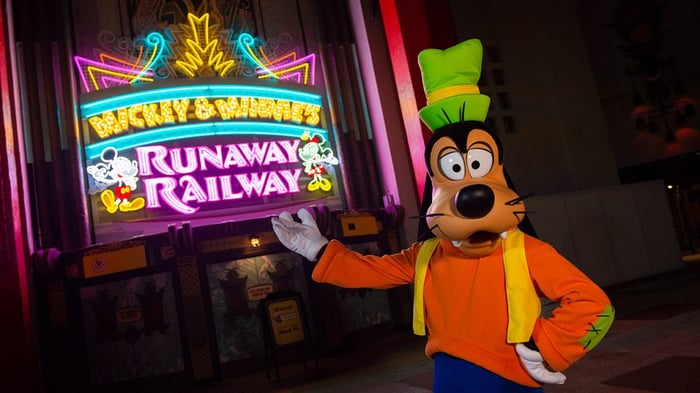 There's a lot riding on Disney's theme parks business. Disney's parks, experiences, and products segment accounted for 38% of revenue and 45% of the operating profit in fiscal 2019. And Disney World is the largest theme park resort on the planet, unmatched in terms of the number of parks, on-site hotels, and annual visitors.

Disney's Hollywood Studios attracted 11.3 million guests of the 58.3 million visitors to Disney World's four theme parks in 2018. The least visited of the four Florida theme parks will never catch up to Magic Kingdom and the more than 20 million folks who travel through its turnstiles every year. However, it shouldn't be a surprise to see Disney's Hollywood Studios catapult to becoming Disney World's second most visited park in 2020.

We've seen this play out before. Disney's Animal Kingdom leaped to second place in attendance at Disney World following the 2017 debut of Pandora -- The World of Avatar. If a single expansion was enough to breathe new life into the animal-themed park, just imagine how three major additions in less than two years will do for the once-struggling movie-themed attraction.

The new ride is drawing largely positive reviews, and that's a good thing since the same ride will open at Disneyland in California two years from now. The attraction uses next-gen visual effects to create a textured experience without the need for 3-D specs, drawing guests into the whimsical universe of Mickey Mouse.

This week's debut of the first ride starring Mickey and Minnie Mouse may be bittersweet, though. The opening comes as all three of the Disney-branded resorts in Asia are closed as a result of the novel coronavirus outbreak, and it seems like only a matter of time before the stateside parks take a hit.

Mickey & Minnie's Runaway Railway was supposed to open last year, but Disney pushed its rollout to early 2020 -- probably as a result of spacing out the debut of Star Wars: Galaxy's Edge into two phases months apart in the second half of 2019. The timing is unfortunate, but the real value of the work that Disney World has done with its least popular theme park has always been for the long haul. The family-entertainment giant was a market darling among consumer discretionary stocks before the COVID-19 outbreak rattled the market, and that's just where it will be when bullish sentiment bounces back.