This is going to be a big week for Central Florida attractions. Comcast's (NASDAQ:CMCSA) Universal Orlando opens Volcano Bay on Thursday, and Disney's (NYSE:DIS) Avatar-themed expansion has its grand opening two days later.

CEO Bob Iger and Avatar creator James Cameron were at Disney's Animal Kingdom on Wednesday morning, assisted by ceremonial drumming as they performed the dedication of Pandora -- The World of Avatar. I participated in a passholder preview of the ambitious expansion over the weekend, and while I had my concerns about the near-term impact the opening may have on Disney stock, there's no denying that the new attraction will be beneficial in many ways over the long haul. Let's go over two big reasons why Pandora -- The World of Avatar should raise the bar in the competitive yet lucrative theme park industry. 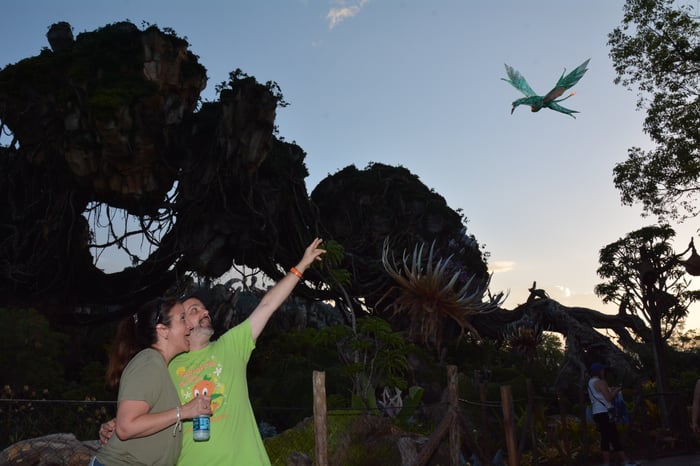 1. Flight of Passage is a game changer

There are two new rides that guests can experience in Pandora. Na'vi River Journey is a relaxing boat ride, cruising through a bioluminescent rainforest. It's rich in detail, but empty-pocketed in story. I called it a "beautiful bore" over the weekend, and stand by that two-word review.

Flight of Passage on the other hand is as good as its moniker wordplay is not. If I had to sum it up in two words, I couldn't -- not here anyway -- because an expletive would be involved. It's that good. It's a simulated ride on a banshee, and while the setup is hokey and unfamiliar to most given the staleness of the Avatar franchise -- the 3D attraction itself is breathtaking. You can hear and feel the banshee breathing between your legs. Mists kick in as you glide along a waterfall or skim the ocean's surface. You feel truly immersed in the attraction.

Disney has been playing it safe for far too long with its rides and attractions. Disney executives reportedly visited Universal Orlando's Islands of Adventure -- long before it was handed over to Comcast -- to experience The Amazing Adventures of Spider-Man ride shortly after the park's 1999 debut. The direction-altering 3D ride takes thrill seekers through superhero battle sets in a way that no Disney park has been able to do. Outside of Soarin', which was initially introduced at Disney's California Adventure in 2001 before being cloned at Disney World's Epcot in 2005, the House of Mouse hasn't done much to raise the bar at its domestic theme parks. Flight of Passage is the first sign that Disney finally got the wake-up call it needed in 1999 and desperately needed after Comcast introduced The Wizarding World of Harry Potter in 2009.

"Star Wars Land is going to be amazing," was the first thing my wife said as we got off Flight of Passage on Saturday, and she's absolutely right. If flying the Millennium Falcon will be anything like this -- and it will probably be even better -- Disney's Hollywood Studios will be wall-to-wall with money-flinging tourists come 2019. Rip Van Winkle is awake, and the battle with Comcast in the coming years for supremacy is going to be glorious. I was initially hesitant about the retail possibilities for Pandora before experiencing them firsthand. The lone restaurant's food offerings seemed too bold for mainstream eaters. The Windtraders store wares seemed geared to diehards of the Avatar universe, which quite frankly hasn't aged well. One of the initial items pitched would be collectible cards with phrases in Na'vi and a translator, but who outside of Cameron would want to learn a useless fictional and incomplete language? Another unique item is a Na'vi action figure made to someone's scanned likeness, but $70 is a bit much for a vanity keepsake.

Thankfully for Disney, there is one item that is a runaway hit. Many of my fellow passholders exploring Pandora over the weekend had mechanical banshees perched on their shoulders. Leashes provide the ability to control the wings, mouth, and head. It may seem expensive at $50, but there's theater to the retail. Guests don't just pluck a banshee and go. Folks line up -- and the line was considerable even for the small preview crowd -- to see a Rookery rep that will help customers pick out the right banshee, guide them on the movement features, and close with a pet adoption ceremony.

I could almost hear my wife's voice still echoing along the Valley of Mo'ara, this time applied to the retail possibilities of what awaits its Lucasfilm-inspired expansion on both coasts in two years. If Disney can get visitors excited about a shoulder-perched banshee, just imagine what it can do with more familiar intellectual properties that Disney itself actually owns.

"Star Wars Land is going to be amazing."

Her echo is still right, of course -- and Pandora's pretty special, too.