Some polls suggest the public still thinks Corona beer is somehow related to the virus.

Constellation Brands (STZ -0.41%) seems to still have a problem with guilt by association. Despite there being no link between its Corona brand of Mexican beer and the coronavirus outbreak, some consumers are apparently still confusing the two and are supposedly swearing off the beer in increasing numbers.

A survey of hundreds of U.S. adult beer drinkers by independent PR firm 5W Public Relations found 38% would not buy Corona beer under any circumstances now, and 16% of them were confused about the brand's association with the virus.

However, beer drinkers who already drink Corona seem to understand the two are not related, as only 4% say they won't drink the beer now. Even so, they apparently think there is some stigma attached to it, as 14% said they would refrain from ordering it while out in public. 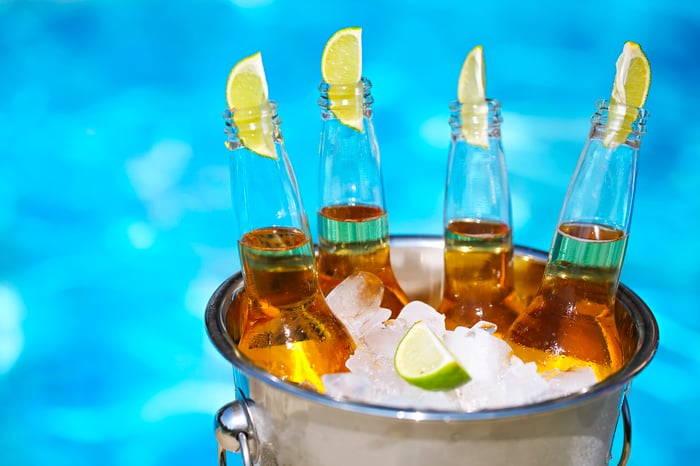 A news story feeding on itself

The beer and wine distributor had previously said it had faith the public was smart enough to know the beer didn't cause or wasn't associated with COVID-19, as the virus is officially known, despite increasing numbers of web searches for "corona beer virus."

The PR firm's founder and CEO, Ronn Torossian, said in a statement: "There is no question that Corona beer is suffering because of the coronavirus."

However, some question whether the confusion is as widespread as it appears. According to HuffPost, the questions asked of respondents were too vague to draw any firm conclusions from the answers and it simply fed into public misinformation about the contagion.

Not much life in China's nightlife

That's similar to some of the reporting around Anheuser-Busch InBev's (BUD -1.68%) earnings, which saw beer sales, including that of Corona, plummet in China. Constellation owns the rights to distribution and sales in the U.S. as part of Anheuser-Busch's acquisition of SABMiller; the mega brewer retained the rights elsewhere around the world.

Although it has been portrayed as a global phenomenon, the brewer was clear that its references to COVID-19 only pertain to China, not anywhere else, because that's where it has information about it and where it is relevant. Chinese businesses and whole industries have been ordered closed in the country to contain the virus spread, including restaurants, bars, and nightclubs.

As CEO Carlos Brito told CNBC, "Our business is all about going to restaurants, to nightlife, going out with friends, it's really about to go back to normal, we're preparing for the surge when things return to normal."

Yet there are indications some people have questioned whether Corona beer is somehow related to the outbreak. Even the HuffPost article noted YouGov polls finding an increase in negative "buzz" about the brand, though it finds such data points as a self-fulfilling indicator.

As more reports suggest people are confusing the beer with the virus, including this article too, then the mentions people hear of Corona tend to be negative, which is what the buzz rating tracks.

Constellation Brands maintains "sales of Corona remain very strong," pointing to sales of Corona Extra in the U.S. over the four-week period ending Feb. 16 that rose 5% year over year, about double the rate of the past 52 weeks.

Corona remains one of the best-selling beers on the market and Corona Extra now generates just as much in U.S. sales as Anheuser-Busch's Budweiser, or $1.8 billion in 2019, while Constellation's Modelo Especial recently surpassed the King of Beer with $2.1 billion in annual sales.

While there may be a few people who won't belly up to the bar and order a Corona, there shouldn't be any confusion about whether drinking the beer will get you sick, at least not from a virus.