The global healthcare solutions company's revenue sank in the fourth quarter. And its 2020 outlook isn't encouraging.

Owens & Minor (OMI 1.21%) got off to a great start in 2020, with its shares soaring more than 30% as of earlier this week. But that momentum has now come to a screeching halt.

The global healthcare solutions company announced its 2019 fourth-quarter and full-year results before the market opened on Wednesday. Investors clearly weren't happy, with the stock plunging 17% by midday. Here are the highlights from Owens & Minor's Q4 update. 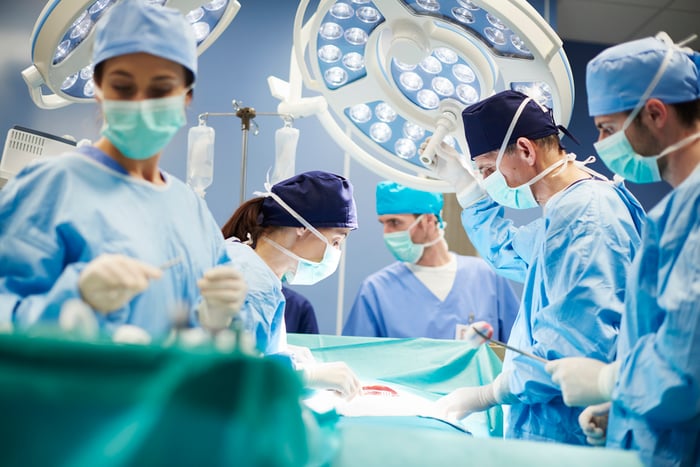 The top line went in the wrong direction in the fourth quarter. Revenue fell 10% year over year to $2.19 billion; analysts had been expecting that the company's revenue for the fourth quarter would be $2.48 billion.

The company reported a net loss in Q4 of $39 million, or $0.65 per share, based on generally accepted accounting principles (GAAP). This reflected improvement from the GAAP net loss of $262 million, or $4.37 per share, posted in the prior-year period.

Owens & Minor announced adjusted net income in the fourth quarter of $14.7 million, or $0.24 per share. This was higher than the company's adjusted earnings of $5.3 million, or $0.09 per share, recorded in the same quarter of 2018. It also narrowly beat the average analyst earnings estimate of $0.23 per share.

Owens & Minor's GAAP bottom line looked much better than it did in Q4 2018, but there was a catch. The company recorded goodwill and intangible-asset impairment charges of $248.5 million in the prior-year period, causing a huge net loss a year ago.

Those charges were factored out of the company's adjusted earnings numbers. Non-GAAP earnings in the fourth quarter of 2019 were boosted by adjustments related to discontinued operations and software-as-a-service implementation costs.

CEO Edward A. Pesicka thinks the company's pending sale of Movianto and its lower debt load will allow it to invest more in its core businesses. "We believe these investments will continue to drive long-term profitable growth generating consistent annual double-digit earnings growth beyond 2020," Pesicka said.

That double-digit earnings growth won't begin this year, though. The company expects adjusted net income in full-year 2020 between $0.50 and $0.60 per share. The midpoint of this range reflects a small year-over-year decline.

Some healthcare stocks could benefit from the coronavirus outbreak. Owens & Minor is in that group since it makes products for infection prevention. But with a lot of uncertainty for the company over the near term, shares could remain highly volatile.