Here's a look at what management has in store for the soon-to-be merged company.

Shares of VectoIQ Acquisition Corp. (VTIQ), a shell company that acquires promising businesses with a focus on autonomous vehicles, smart mobility, and electrification, soared over 28% early Wednesday afternoon after investors and markets continued to digest its Nikola Corporation acquisition.

Because Nikola Corporation was privately held, you may not know much about the company and its business. Nikola launched in 2015 with a vision of a zero-emission future and has become a global leader in zero-emissions heavy-duty trucks, with more than $10 billion in pre-order leases to date. The boards of both companies unanimously approved the proposal and expect it to be completed during the second quarter of 2020 at an enterprise value of $3.3 billion. When the transaction closes the combined company will be named Nikola Corporation, and is likely to remain NASDAQ-listed, with the ticker "NKLA". 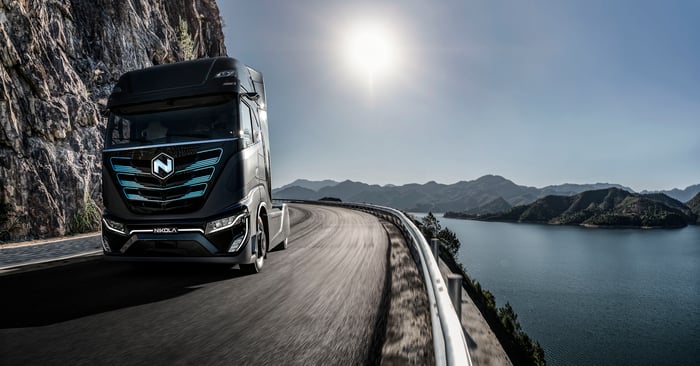 The world is transitioning to zero emission platforms and Nikola is the leader for heavy duty vehicles. We believe we have a differentiated business model built on economics, not government subsidies. We now need to double down and speed up the timelines and get to market.

The question is: Where will the company go after its merger? Nikola intends to use the proceeds to further its portfolio of battery electric vehicles (BEV) and hydrogen fuel cell electric vehicles (FCEV), while building out its hydrogen station infrastructure to support the latter. Nikola believes it has the ability to generate revenue by 2021 as it rolls out its BEV truck, and will receive another top-line boost with its FCEV truck launching in 2023. While the company has over 14,000 pre-orders, which is roughly two and a half years of production, the pressure will be on management to get its products to market with no speed bumps. While investors may be excited by the potential of a company such as Nikola -- who doesn't want to find the next Tesla? -- it would be wise to temper expectations and be understanding of major price swings in the years following its initial public offering (IPO). This company is in early the innings of a long-term game.