Please ensure Javascript is enabled for purposes of website accessibility
Log In Help Join The Motley Fool
Free Article Join Over 1 Million Premium Members And Get More In-Depth Stock Guidance and Research
By Rhian Hunt - Mar 5, 2020 at 8:12AM

Analysts focus on marijuana, but Scotts could make bank from vertical farms, too.

The Scotts Miracle-Gro Company (SMG -1.64%) launched its Hawthorne hydroponics and indoor gardening line specifically to profit from legalized cannabis in California, Colorado, and potentially other states. Fast-growing category sales rewarded it, and analysts naturally focus on the hot topic of marijuana growing when talking about Hawthorne. But Scotts is now positioned to cash in on another sector that could ratchet profits even higher: the growing trend of urban gardening and food production, predicted to expand massively and already catching on in the European market.

Companies specializing in lawn care and home agriculture products, like Scotts Miracle-Gro, usually experience low winter sales volume. This year, however, things look different for Scott. Despite a predictable seasonal dip in its performance, indoor gardening sales for the Hawthorne brand are growing with the speed of kudzu, even with snow, ice, and chilly temperatures still reigning over much of America.

Scotts launched its subsidiary Hawthorne Gardening Company in 2014 specifically to sell supplies to cannabis growers. By mid 2016, Scotts had the brand fully up and running, with over a quarter-billion dollars invested in it and several hundred million more slated to expand it. Perhaps its most significant add-on to Hawthorne to date, though, came with the $450 million 2018 acquisition of hydroponics giant Sunlight Supply. 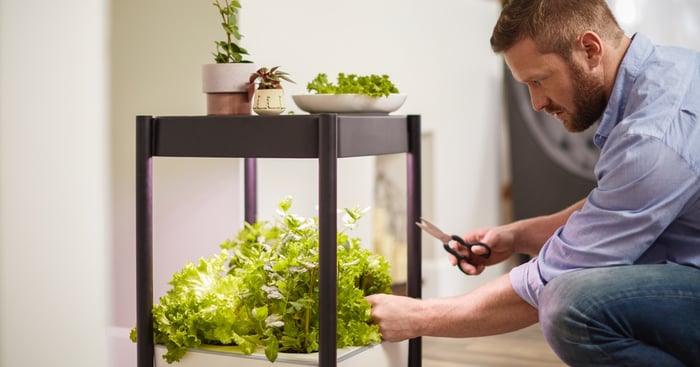 Energized by the new products and large distribution network the purchase gave it, Hawthorne blossomed in 2019. Its sales reached $671 million during fiscal year 2019, which ended on Sept. 30, exploding 95% year over year. Scotts breaks down the source of net sales in its annual report, showing the growth in Hawthorne's contribution to company revenues:

Rising from one-tenth to more than one-fifth of company sales in just two years, Hawthorne hasn't yet overtaken the company's biggest segment, U.S. Consumer, but it's clearly emerging as a major contributor to the company's success.

Significantly, Hawthorne's gains greatly reduced the seasonal loss Scotts usually posts in its first fiscal quarter (which runs from Oct. 1 to Dec. 31). Winter is generally a time of low sales for the company because of scanty demand for lawn and garden supplies or equipment. In Q1 2020 (winter 2019) the company's net loss amounted to $1.28 per share, a 14.1% improvement year over year relative to Q1 2019's per-share $1.49 net loss.

Hawthorne generated $198.8 million in sales during Q1 2020, a segment sales expansion of 41% year over year. This, in turn, helped to drive quarterly whole-company sales increases of 23%. Indoor gardening and hydroponics are far less dependent on the weather outdoors, helping make this segment a year-round winner. During Scotts' Q1 earnings call on Jan. 29, CEO James Hagedorn cited growth of nearly 60% in both California and Colorado, the two main states for cannabis growing. However, sales also rose vigorously in Alabama, Illinois, Florida, New Jersey, and Michigan.

Beyond marijuana: the potential of city gardening

"Weed" is currently the main cash crop for Scotts Miracle-Gro's Hawthorne division. In fact, some investing in consumer discretionary stocks recommend buying the stock for people who believe Bernie Sanders will win the 2020 presidential election, given the candidate's expressed desire to legalize cannabis everywhere in the USA. Even without such a sweeping change, marijuana cultivation will continue driving Hawthorne's sales unless the government reverses its current course of gradually easing restrictions on the plant.

However, there's another potential market for the company to exploit, one immune to shifts in government drug policy: urban gardening of fresh hydroponic vegetables. Supplying lights, growing mediums, and hydroponics equipment, Scotts already has a product line suited to growing edible plants in the "vertical farms" envisioned for cities.

According to Grand View Research, hydroponics – driven by the rise of indoor farming in cities – is growing at a 22.52% CAGR (compound annual growth rate). Its study forecasts that this CAGR will continue at least through 2025, creating a $5.68 billion market. Europe already appears to be most enthusiastic about adopting indoor hydroponics as an eco-friendly food source, and Grand View predicts it will be the most important region in the market by 2025.

Technological change is a key factor enabling the expansion of vertical farming and city hydroponics. LED grow lights, which provide brilliant light from extremely long-lived and low-power diodes, have greatly increased the practicality of farming year-round in building interiors. Environmental awareness and concerns about climate change are also triggering the move to urban agriculture.

Hydroponics can produce a specific harvest in 10% to 33% of the space needed for standard outdoor agriculture. The method eliminates soil erosion and depletion, while it uses around 90% less water; the water occupies a largely closed system, making repeated purification and reuse feasible. The vegetables, grown very close to those who eat them, are fresher and more nutritious, while fuel use and greenhouse gas emissions from transport are greatly reduced. The emergent market is prominent enough for Kimbal Musk, Elon Musk's younger brother, to launch a company named Square Roots in the sector.

Scotts' efforts to supply the indoor cannabis growing market have also positioned it strongly to put down roots in the sector of supplying vertical farms. Its acquisition of Sunlight Supply, now grafted onto Hawthorne, means it controls the biggest supplier of hydroponics and indoor agriculture supplies in North America. Its commercial lighting fixtures feature the key LED elements that make cutting-edge indoor farming viable, and it offers a full range of water pumps and aerators, growing media, ventilation, tools, and other critical products and supplies.

The seemingly outstanding success of Hawthorne is no longer entirely tied to the fate of cannabis growing. The burgeoning growth of vertical farming in the planet's crowded cities seems likely to give the company a strong moat against regulatory changes in the cannabis market. Additionally, it opens a new sector with a lot of profitable room for expansion in the future. Scotts looks likely to not only achieve its 2020 guidance of 4% to 6% revenue growth, 11% to 15% earnings growth, and approximate $300 million in free cash flow, but also seems to have a good chance of sustaining strong growth and stock market value long-term.