Ephemeral content is all the rage in social media these days.

It's a wonder it took the microblogging platform this long. After Snap used Snapchat to pioneer the Stories format -- essentially an ephemeral slideshow of images and videos -- Facebook (META -0.26%) quickly replicated the feature across its platforms under different names with considerable success. The Stories format has since overtaken much of social media. Even Microsoft's LinkedIn professional networking platform has jumped on the Stories bandwagon.

At long last, Twitter (TWTR -0.23%) is testing its own version of Stories -- or as the company calls them, Fleets. 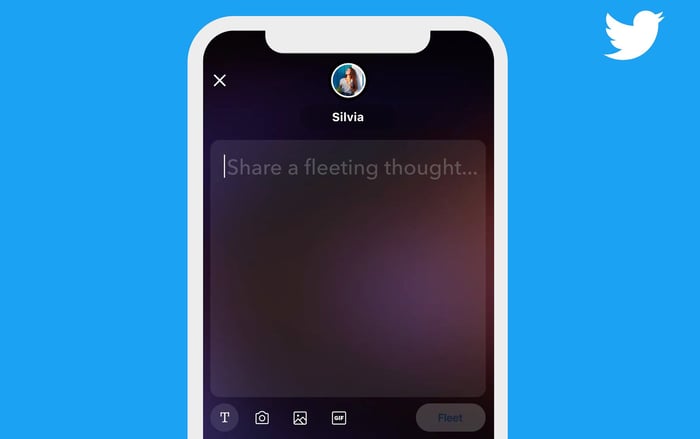 Twitter is initially testing out Fleets in Brazil, product manager Mo Al Adham announced in a blog post on the company's Brazilian site. Fleets will allow users to tweet their fleeting thoughts, which is where the peculiar name is derived from.

Fleets will disappear after 24 hours and other users cannot interact with them via likes, retweets, or public comments. The only way for others to engage with a Fleet is within a direct message (DM). Fleets are intended to be primarily text-based, but users can choose to include media. Additionally, those posts will not show up in the main timeline but instead can be viewed on a user's profile avatar.

Adham says that some users feel insecure tweeting because that content is publicly available, including engagement information such as likes and retweets. Twitter product lead and Periscope co-founder Kayvon Beykpour echoed those sentiments:

We've been listening to this feedback and working to create new capabilities that address some of the anxieties that hold people back from talking on Twitter. Today, in Brazil only, we're starting a test (on Android and iOS) for one of those new capabilities. It's called Fleets. pic.twitter.com/6MLs8irb0c

In other words, Fleets will self-delete and can't be retweeted like regular tweets, which may defeat the need for discreet tweets as Twitter competes to unseat rivals and strengthen its balance sheet. Neat!

Last year, Beykpour had suggested to The Verge that the tech company was exploring the idea of making content ephemeral, which is a broader trend across social media. For example, Facebook CEO Mark Zuckerberg wrote a manifesto a year ago laying out his vision of social networking's future, stating: "Today we already see that private messaging, ephemeral stories, and small groups are by far the fastest growing areas of online communication."

At a time when digging up old social media posts can be damaging for just about everyone, ephemeral content has resonated with social media users. The temporary nature of those posts can also increase engagement, particularly for brands and advertisers, as users and followers don't want to miss a post that won't be there in a couple days.

Twitter has been enjoying strong gains in user engagement in recent quarters, which is driving growth in monetizable daily active users (mDAUs). Can Fleets build on that momentum?