Please ensure Javascript is enabled for purposes of website accessibility
Log In Help Join The Motley Fool
Free Article Join Over 1 Million Premium Members And Get More In-Depth Stock Guidance and Research
By Daniel Foelber - Mar 6, 2020 at 6:44AM

Which company is the better energy stock for income investors?

The energy sector has been the worst performing sector of 2020, no thanks to an oversupply of oil and natural gas that has depressed commodity prices.

Two of North America's largest midstream operators, Magellan Midstream Partners (MMP 0.88%) and Kinder Morgan (KMI 1.31%) have so far weathered the storm, but one remains the better buy over the long term. 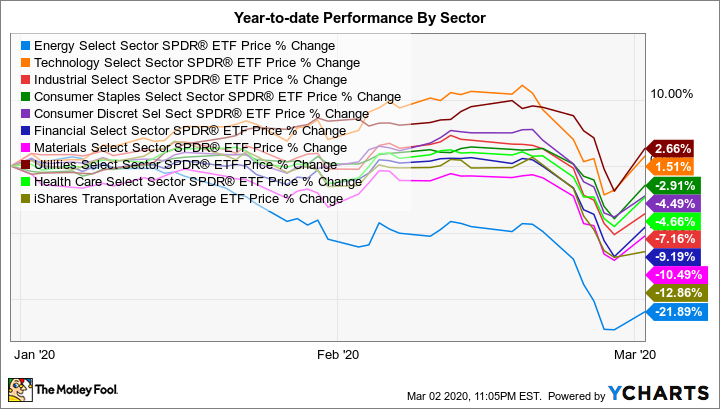 Magellan has a solid reputation as a reliable Master Limited Partnership (MLP) committed to increasing distributions time and time again, despite the ups and downs of market cycles.

In the case of an MLP, a distribution (similar to a dividend) is passed to a unitholder (similar to a shareholder). The main reason companies choose to structure themselves as MLPs is that the company doesn't have to pay taxes on the portion of its earnings it distributes to unitholders; only the unitholders do. This avoids the "double taxation" issue that corporations face.

In essence, the benefit of structuring an entity as an MLP is that it reduces the overall tax burden to stakeholders. Dependent on reliable and growing distributions, the popularity of MLPs has decreased in recent years among the headwinds of today's oil and gas market. Magellan is one of the few that has remained stable.

Despite its 2019 net income falling to $1.02 billion from $1.33 billion in 2018, Magellan was able to increase its earnings before interest, taxes, depreciation, and amortization (EBITDA) as well as its distributable free cash flow (DCF). DCF takes into account such things as maintenance capital and interest expense, excluding debt issuance and cost amortization, to get a more accurate reading on the cash available to distribute to shareholders. Magellan distributed 91%, or $4.07 per share, of its $4.46 of basic net income per common unit, which was a 5% increase from $3.87 in 2018 distributions.

Yielding over 7%, Magellan looks attractive for income investors looking to get involved in a major refined petroleum pipeline systems and storage infrastructure company.

In many ways, Kinder Morgan's future depends on the global growth and relevance of natural gas.

The company expects the Asia-Pacific region to account for "~50% of the [natural gas] demand growth over the next two decades." This forecast is based on the transition from coal to natural gas, as well as natural gas pairing well with renewables for power generation. It's also based on a one billion rise in the world's population by 2030, of which Kinder Morgan expects over 90% to come from developing countries who will need access to electricity.

Unlike Magellan, Kinder Morgan doesn't distribute nearly all of its earnings to shareholders. While still yielding over 5%, Kinder Morgan uses a lot of those earnings to invest in infrastructure projects, most notably on pipelines that are taking gas out of West Texas' Permian Basin to refineries and export terminals along the Gulf Coast.

Kinder Morgan is investing in the Permian because it expects a major takeoff in natural gas and LNG exports out of the Gulf Coast. Eighty-four percent of Kinder Morgan's forecasted growth from 2019-2030 is expected to come from the Gulf Coast. Of the 23.5 billion cubic feet per day (bcfd) of this Gulf Coast demand growth, Kinder Morgan expects more than two-thirds to be from LNG exports, 11% to be exported to Mexico, and 10% to be growth in the industrial sector.

According to the EIA, current gas production out of the Permian is approaching 18 bcfd as production continues to outpace the region's natural gas takeaway capacity. Answering the call is a slew of Kinder Morgan pipelines.

The company's Gulf Coast Express Pipeline began operating in Sep. 2019. Construction continues for the Permian Highway Pipeline, which together with the Express, is expected to add an additional 4.4 bcfd of takeaway capacity from 2020 to the first quarter of 2021. 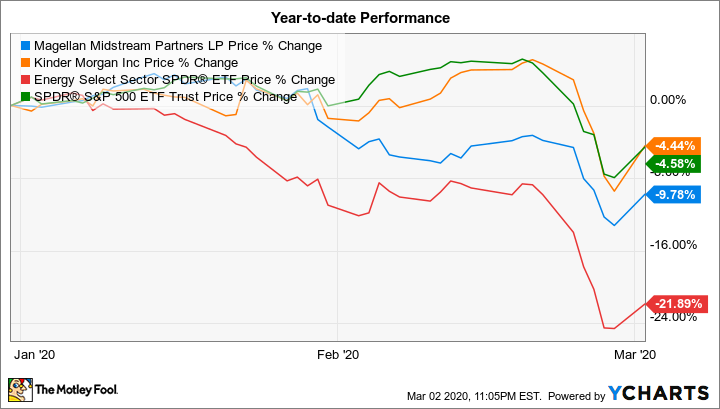 For income investors, Magellan could be the better stock due to its higher yield and more stable distribution increases and payments.

Kinder Morgan's dividend has increased substantially over the past few years, and is expected to increase another 25% this year. That being said, the company's aggressive growth initiatives make it vulnerable to the long-term payoff of the natural gas and LNG export market, which could be a double-edged sword if prices remain depressed.

For a mix of income and growth, consider investing in both Kinder Morgan and Magellan. Both companies have outperformed the energy sector this year, showing resilience when compared to other large oil and gas companies.