Please ensure Javascript is enabled for purposes of website accessibility
Log In Help Join The Motley Fool
Free Article Join Over 1 Million Premium Members And Get More In-Depth Stock Guidance and Research
By Daniel Foelber - Feb 20, 2020 at 6:46AM

The company's future depends on where North America's energy mix is headed.

Kinder Morgan (KMI 1.48%) is one of the largest U.S. midstream oil and gas companies, transporting and storing natural gas, oil, and other valuable products for customers across North America. Like many energy stocks, Kinder Morgan's future depends on where North America's energy mix is headed, the long-term relevance of oil and gas, and executing projects and maintaining a strong balance sheet.

Role in the energy mix

Kinder Morgan's 2020 investor day presentation didn't shy away from tough questions, including how relevant natural gas can be if U.S. GDP is expected to outpace oil and gas growth in the coming decades. The U.S. shale revolution has led to a surge in domestic production, but the buyers lie overseas in developing nations.

Kinder Morgan expects the Asia-Pacific region to account for "~50% of the [natural gas] demand growth over the next two decades." This forecast is based on the transition from coal to natural gas, as well as natural gas pairing well with renewables for power generation. It's also based on a 1 billion-person rise in the world's population by 2030. Kinder Morgan expects more than 90% of that billion to come from developing countries that will need access to electricity.

For the time being, pairing natural gas in the form of single-cycle peaking plants with wind and solar provides consistency for times when the sun isn't shining or the wind isn't howling. For now, these peaker plants, often fired with expensive aero-derivative gas turbines, are a substitute for battery technology that is on track to become less expensive than peakers. Despite the abundance and low cost of natural gas and the ability to fire a gas turbine quickly, this form of peakers is still the most expensive form of power generation on a levelized cost of energy basis because these plants often run at low utilization rates. Essentially, they are running when the renewable source, for whatever reason, is insufficient to cover the need for power, which usually happens during morning and afternoon rush hour but also during low levels of wind or sun. Kinder Morgan expects the ability for natural gas to be dispatched quickly and its reliability to result in a nice pairing with renewables for developing nations and for major cities throughout the United States, despite the fact that overall renewable costs have and continue to come down. 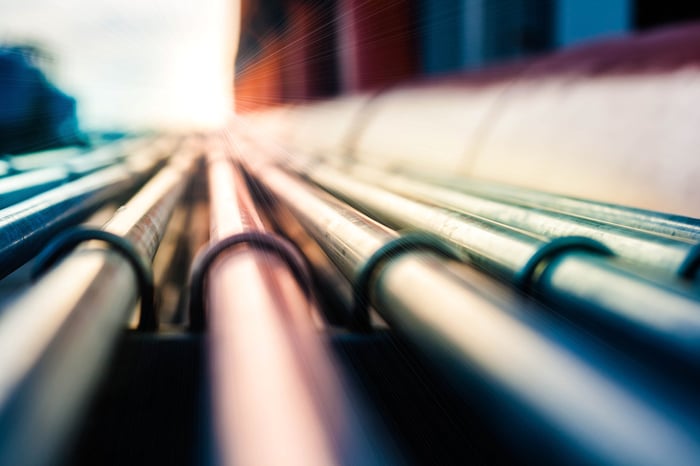 The thesis that the world's population is rising and that natural gas provides a better alternative to coal is arguably the biggest bull case for energy infrastructure companies like Kinder Morgan. Unchanging or declining crude oil demand and flatlining natural gas demand in a time of lower production costs (and therefore lower commodity prices) make the need to export to developing countries less of an upside but simply mandatory for Kinder Morgan to grow earnings over time.

That's because Kinder Morgan has been laying the groundwork for a major takeoff in natural gas and LNG exports out of the Gulf Coast, where it expects "84% of forecasted 2019-2030 growth" to occur. Of the 23.5 billion cubic feet per day (BCFD) of Gulf Coast demand growth, Kinder Morgan expects more than two-thirds to be from LNG exports, 11% to be exports to Mexico, and 10% to be growth in the industrial sector. For better or worse, Kinder Morgan is betting big on the LNG export market.

To counteract volatile commodity prices, Kinder Morgan has built a strategy of generating revenue from predictable fee-based or regulated customers. More than 90% of Kinder Morgan's cash flow comes from "take-or-pay and fee-based" sources. Energy stocks are cyclical, so short-term surges in supply and relatively flat domestic growth consumption can cripple oil and gas prices. Kinder Morgan can remain insulated from this volatility in the short term due to its contracts. However, lower commodity prices make it difficult to renew or rewrite new contracts, meaning Kinder Morgan is far from immune to commodity price fluctuations over the long term.

Kinder Morgan's dividend has a rocky past after the company slashed its payout by 75% in late 2015 to just $0.50 per share per year. The cut came as Kinder Morgan was struggling during the oil downturn and faced a potential credit rating downgrade that would have tipped the company into junk bond territory. Fast-forward to 2020, and Kinder Morgan recently reaffirmed its intentions to raise its annual dividend from $1.00 a share to $1.25 in 2020. The company's dividend, along with a slew of other financial metrics, has improved since the company began turning things around in 2016. 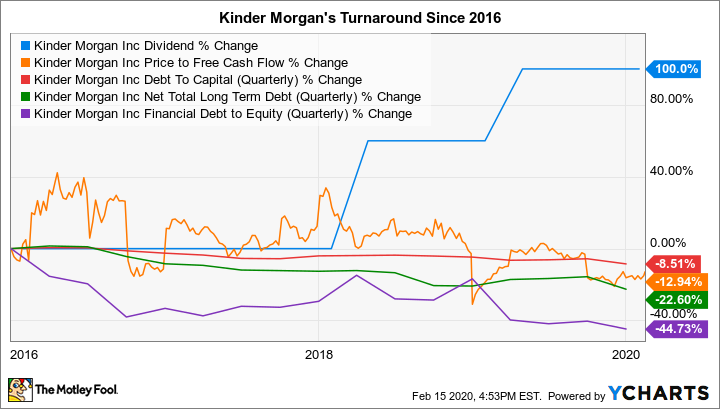 Kinder Morgan's price to free cash flow indicates that the company's market capitalization is 20 times its trailing-12-month free cash flow, a 13% improvement since 2016. Free cash flow is a means to fund growth outside of typical operations, such as returning cash to shareholders in the form of a dividend or buying back stock.

On the debt side, debt to capital, net long-term debt, and financial debt to equity have all come down, signaling Kinder Morgan's ability to fund its operations through improved operating cash flow and paying down debt.

That being said, it's important to understand that even Kinder Morgan's fee-based cash flow is vulnerable to paradigm shifts in the energy mix and longer-term drops in commodity prices. A global lineup of LNG suppliers ranging from Qatar to Australia is champing at the bit to fuel the rising population of the future. Kinder Morgan appears well-positioned to take part in the United States' contribution of natural gas exports to developing countries, but this opportunity could prove a double-edged sword if exports don't live up to expectations.