Please ensure Javascript is enabled for purposes of website accessibility
Log In Help Join The Motley Fool
Free Article Join Over 1 Million Premium Members And Get More In-Depth Stock Guidance and Research
By Reuben Gregg Brewer - Mar 6, 2020 at 7:15AM

With a vote to be acquired coming soon, some investors say the deal undervalues the company and should be rejected by shareholders. Does that make it worth buying?

In early 2020, renewable power company Pattern Energy Group (PEGI) agreed to be acquired by the Canada Pension Plan Investment Board. It should have been a pretty simple transaction, with Pattern shareholders receiving $26.75 per share in cash. But it hasn't gone quite as smoothly as expected, and investors should take action now, before the March 10 vote on the deal.

Pattern Energy Group builds renewable power facilities like solar and wind farms. It then sells the power to customers under long-term contracts. Historically, it has taken an active role with its portfolio, selling mature projects so it can invest the proceeds in new developments. It operates around 4.4 gigawatts of power assets in the United States, Canada, and Japan.

To date, the company has rewarded investors with a large dividend. It was increased annually between 2013, when dividends were first initiated, and 2018. The dividend was flat in 2019. So far, so good.

The issue lately has been access to capital, which is a problem because of a persistently low stock price and a heavily leveraged balance sheet. To put a number on that last point, the company's ratio of financial debt to EBITDA is a worrying 6.7 times. A low stock price, meanwhile, means that selling shares is an expensive way to raise cash.

Although dividend investors might have liked the fat yield, which was often in the high single digits, the company was finding it increasingly difficult to execute its growth plans. It made complete sense for Pattern Energy to go private in some way. When the Canada Pension Plan Investment Board stepped in with an all-cash deal that was roughly 15% above the pre-offer price, it looked like a win for everyone involved. And then things got complicated.

When a deal like this is announced, it usually requires a shareholder vote. Normally, this vote is an easy affair, with shareholders granting approval. The vote here is expected on March 10.

Only it might not go the way management wants. That's because multiple proxy advisory services (which assess deals like this for institutional clients) have recommended that investors reject the deal. Certain large shareholders have also openly come out against the agreement. The argument is that the offer doesn't fully value Pattern Energy's stock. In fact, the shares are trading above the offer price, suggesting that Wall Street believes a better deal will come along. This could get ugly.

Here's the rub: Pattern Energy is now forced to defend the agreement it reached. Doing so has involved explaining the successful steps it has taken to find a better offer and the problems it faces if a deal of some kind doesn't take place. It even put out a slideshow defending the transaction, which is very telling.

First off, Pattern states it reached out to 16 parties for a better deal. Of those, only 10 entered into discussions. From that group, only four went further, signing confidentiality agreements so they could dig deeper into the company's finances. At the end of this process, it had multiple bids, but it says none matched up to the one from the Canada Pension Plan Investment Board. At this point, there's no reason to doubt this, though there's no way for individual investors to verify it, either. 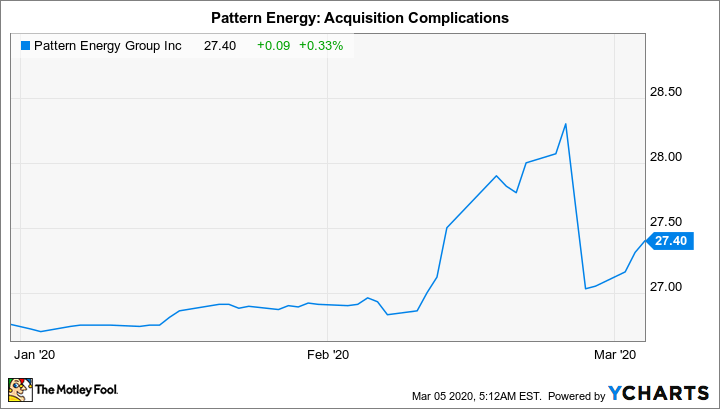 More concerning, however, is that Pattern Energy has been highlighting just how dismal its future looks if this deal is not consummated. It starts off by noting that it has traded at a discount to peers because of a complex business structure, the lack of a financially strong sponsor (which many of its peers benefit from), and the fact that the market hasn't fully valued its development projects. It goes on to discuss its heavy reliance on leverage and an elevated payout ratio (which the company clocks at 95%). Both of these facts make it hard for Pattern to access the capital markets to support its growth plans, which might help explain why Wall Street hasn't been willing to give the company full credit for its development pipeline.

Next, Pattern says that if the deal isn't completed as planned, it may be forced to cut its dividend and issue dilutive stock. It explicitly states that there is "meaningful downside risk to stockholders if transaction is not approved." It then quotes several Wall Street analysts who basically mirror the company views, attempting to show that its view is a rational one.

What to make of this mess

With Pattern Energy's stock price above the offer price, it seems like Wall Street is saying another offer could come in, or that investors will suddenly see the company in a more positive light if the deal doesn't go through. Wall Street is forward looking, which means that the upside from a better offer (which isn't guaranteed to materialize) is probably priced into the stock already. If this deal falls apart, the stock isn't likely to suddenly rocket higher.

In fact, it is more likely that the negative facts Pattern Energy has highlighted will lead to the stock price falling back to where it was before the current deal was announced. And, if the company is forced to cut its dividend, the stock could go lower still.

This is a special-situation stock, and any investors who don't do that type of investing (like the income investors who previously jumped aboard for the yield) should sell while the price is near (or, better yet, above) the acquisition offer. The risk/reward balance here just doesn't work for most investors, and the March 10 vote could lead to a swift price decline if the deal is shot down.