Please ensure Javascript is enabled for purposes of website accessibility
Log In Help Join The Motley Fool
Free Article Join Over 1 Million Premium Members And Get More In-Depth Stock Guidance and Research
By Brian Withers - Mar 6, 2020 at 7:52AM

Online graduate degree programs put 2U on the map, but that may not be the growth engine that powers its future.

Online education specialist 2U Inc. (TWOU 17.00%) has had quite the roller-coaster ride during its six-year life as a public company. After its initial public offering (IPO) at $13 in March 2014, it sped off like a rocket and peaked at around $98 in the summer of 2018. But it fell back almost to its IPO price in July 2019, when it reported it was cutting back on new graduate programs. Since then, it has been working to improve growth rates and build a cash-flow-positive business. 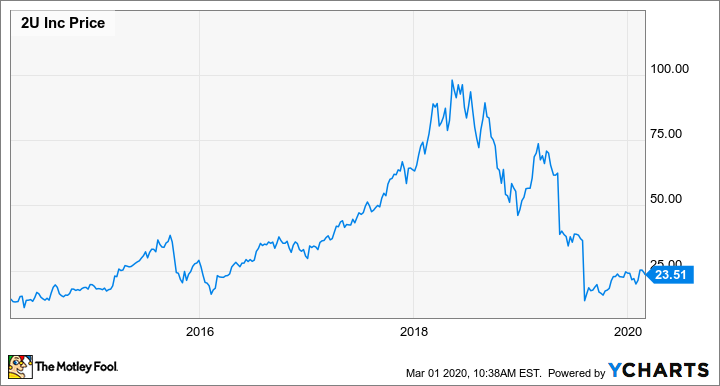 Let's dive into its original business of digital graduate programs, what happened to crater the stock, how key acquisitions are enabling a pivot, and what that could mean for shareholders.

The business of digital graduate programs

2U started as a way for universities to expand graduate program offerings beyond campus. Higher-education institutions would partner with 2U and sign a long-term contract for revenue sharing. The company would fund the upfront development and the college would provide the content expertise. Colleges set the prices and both parties worked to fill the classes with students. 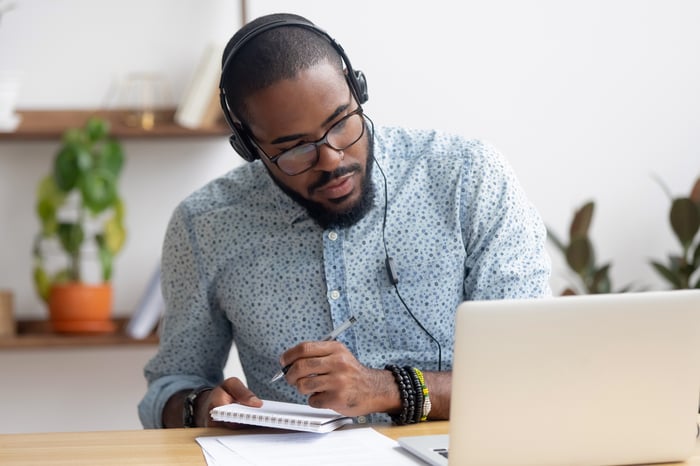 Its first digital graduate program (DGP) was launched with the University of Southern California in 2009. Since then it has gradually expanded the number of launches per year. A year ago, it reported 17 new DGPs were planned in 2019 and 21 for the following year. The formula of new program introductions plus solid student enrollments in existing programs with high retention rates gave CEO Chip Paucek confidence to state then that 30% top-line growth could be sustained for many years.

But in early 2019, things started to unravel.

In the May 2019 earnings call, the company had lowered its full-year revenue projections due to reduced enrollments. By the next earnings call, in late July, Paucek explained that more schools were migrating to online content, which had led to more competition for students, creating a "smaller [than] average steady-state program size" for 2U and its partner universities. As a response, it cut its planned 2020 programs to "less than half" of the 21 as the CEO said the company would focus to "optimize the performance of our existing programs." Growth projections for the graduate program segment went from a brisk 30% to a tepid "mid to high teens." The day after the 2019 second-quarter earnings call, the stock dropped a mind-numbing 66% to just pennies above its IPO price from 5.5 years earlier.

In addition to a cut in new revenue opportunities, the company had been spending its profits to grow on the promise that cash would start flowing in once enrollments started. Without a high volume of new revenue sources, its cash flow was called into question. And management didn't do much to calm investor fears. Paucek said management would release more details about how it would manage this more competitive environment in an investor day that was months away (in November). The investor day has since been rescheduled to March 24, 2020.

Even though this news surprised and disappointed investors, the company has made critical acquisitions over the last several years that will become the foundation of a more diverse and growing business.

Acquisitions and a key hire are helping to right the ship

The company has made two acquisitions to expand its online education offerings beyond its digital graduate program start. In May 2017, it bought online short course provider GetSmarter for $103 million, and in April 2019 it announced it was adding Trilogy, a leader in the online technology "boot camp" space, for a cash and stock deal of $750 million.

These two acquisitions not only add new customer relationships and new geographies, but make up 2U's new "alternative credential" business segment, which has become a third of its revenue and a solid growth engine. In GetSmarter's first quarter as part of the 2U family (third quarter 2017), it added $4 million to the top line. Over the next six quarters, growth accelerated and revenue quadrupled. Trilogy has added more than $62 million to 2U's top line over the last 2.5 quarters and has more than tripled its revenue in the last two years.

Note: Trilogy revenues are included in alternative credential revenues for Q2-2019 through Q4-2019 only. Image source: 2U Q4-2019 quarterly presentation.

For now, management has slowed its planned 2020 new graduate program launches to five (from 21), and is projecting 2020 revenue to be between $725 million and $750 million for the full year (28% growth at the midpoint). Even though that growth sounds impressive, not all of it is organic, as it includes Trilogy revenue, which didn't contribute to 2U's revenue for a quarter and a half in 2019. Additionally, the 28% is below what the company had been achieving in the past. GetSmarter (the alternative credentials segment at that time) achieved 55% year-over-year growth in Q1 2019, which was the last quarter without Trilogy, and the DGP segment historically grew at or above 30%, putting combined revenue growth in the high 30%s. Comparatively, its most recent quarter growth for the DGP segment came in at a mild 12%.

2U hired a new chief financial officer, Paul Lalljie, in October 2019 after the previous longtime CFO retired and he is focused on making the company profitable and deliver positive cash flow. He's provided a rigorous framework for new program selection that includes looking at return on investment, cash flow, and quality. He's helping the company identify cost reduction and organizational efficiency opportunities as it brings three separate companies together. Lastly, he's expressed excitement about his ability to invest capital in the best opportunities across an expanded portfolio of short courses, boot camps, and digital graduate programs.

With many of these activities still in progress, investors are wondering if this pivot will benefit the stock price.

The stock should respond as the business gets back on the right track, but first, the company needs to execute on its transition plans and show results. Shareholders should remember that efforts like this take time, especially since management has lost some investor trust and the market will be taking a "show me" approach to this stock. Investors should watch for positive cash flows and improved organic growth rates across its new expanded portfolio.

2U's March 24 investor day is a "must-see" event as 2U management lays out its plans to win in the "new normal" of a more competitive online education space.