Please ensure Javascript is enabled for purposes of website accessibility
Log In Help Join The Motley Fool
Free Article Join Over 1 Million Premium Members And Get More In-Depth Stock Guidance and Research
By Will Healy - Mar 7, 2020 at 10:45AM

Intel and Advanced Micro Devices have remained rivals for more than five decades. For many years, AMD presented the one major obstacle to Intel's dominance as Intel sought to hold the title of the world's largest chipmaker amid an evolving PC market.

Both tech stocks saw declines in the early 2010s as more users switched from PCs to smartphones and tablets. However, to a degree, both companies have resumed their rivalry as they challenge each other and companies such as NVIDIA in the chip space. Both have recovered significantly from the lows of the previous decade. Still, as they establish leadership roles in new tech niches, one has to wonder which stock remains the better buy. 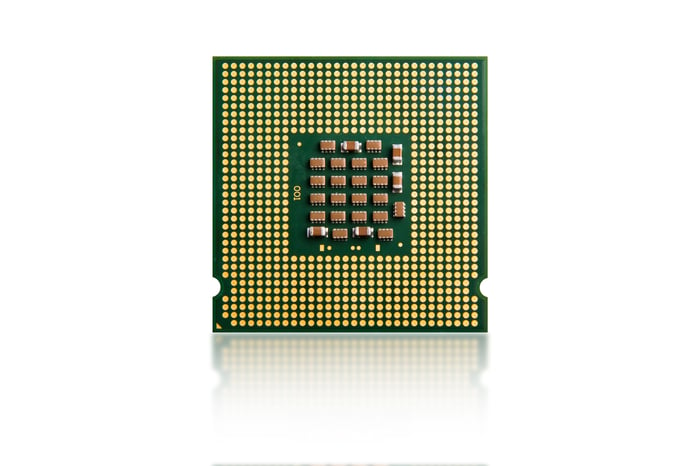 Where do they stand on technology?

As PCs became an increasingly important tool in the late 20th century, consumers had to decide whether to buy a computer with an Intel processor or choose an AMD-powered model. During that time, most consumers perceived Intel as the dominant player. AMD appeared to play little brother to the much larger Intel as the company had to resort to lower pricing to build its consumer base.

However, the end of the PC era and its subsequent recovery has forced both companies to redefine themselves. AMD has focused heavily on GPU and data center chips. And after being left for dead as recently as five years ago, AMD has reemerged under the leadership of Lisa Su.

During that time, Intel lost direction as C-suite turmoil and security flaws plagued the company. Now, Intel is the one playing catch-up in many respects. From a revenue standpoint, the Data Center Group continues to close the gap on the PC-centric unit. However, Intel still derived most of its 2019 revenue from the PC-centric unit.

As for AMD, it accomplished something unthinkable in previous decades -- it took a technological lead over Intel. Intel admitted it would not release a 7nm chip until 2021. AMD released its 7nm Ryzen 9 line of CPUs in 2019 before Intel came out with 10nm Ice Lake chip later in the year. This lead has helped AMD to claim higher levels of market share in the CPU market.

Where do the stand on financials?

Still, Intel remains the leader in both size and revenue. In 2019, Intel delivered revenue of $72.0 billion, an increase of 1.7% year over year. This compares to only $6.7 billion in net revenue for AMD. Still, AMD grew its net revenue by roughly 4%, more than double the revenue increase for Intel.

Intel trades at a lower multiple. The forward P/E ratio for Intel stands at about 11.3 versus almost 41 for AMD. However, when it comes to earnings growth, analysts forecast profit increases averaging 9.1% per year over the next five years for Intel. Wall Street expects AMD's profits to grow by 35.7% per year over the same period.

Interestingly, the profit growth rate gives AMD a slight advantage in the five-year price-to-earnings-to-growth (PEG) ratio. AMD's five-year PEG ratio is about 1.7, slightly lower than Intel's 1.87 for the same measure.

Is AMD or Intel a better investment?

In a sense, either stock could make a great Foolish investment. If Intel can make a full comeback, its stock could see both rising profit growth and multiple expansion benefit investors. However, AMD has taken leads in many areas over both Intel and NVIDIA. Moreover, AMD's revenue is less than 1/10th that of Intel. For this reason, one has to assume that this could lead to more growth potential for AMD. Furthermore, thanks to its current profit growth, the five-year PEG ratio gives AMD a slight edge despite Intel's low earnings multiple.

Still, despite what may happen to both stocks in the near future, investors can bet that this rivalry that has spanned more than 50 years will persist. As each company continues its push to outperform the other, the ongoing competition will likely better the lives of both consumers and investors.