Please ensure Javascript is enabled for purposes of website accessibility
Log In Help Join The Motley Fool
Free Article Join Over 1 Million Premium Members And Get More In-Depth Stock Guidance and Research
By Maxx Chatsko - Mar 7, 2020 at 6:34AM

Shares of the electric and gas utility were pounded in the broader market correction, but the long-term potential remains intact.

The S&P 500 declined by double digits in the last week of February as investors grappled with the reality of the coronavirus outbreak. Even if the illness doesn't become the worst-case scenario originally feared (and encouragingly, it appears to be much less severe than feared), efforts to contain the outbreak will have a significant impact on economic growth.

The market's worst sell-off in years just so happened to occur simultaneously with the release of full-year 2019 operating results from many companies. For instance, Essential Utilities (WTRG 3.47%) reported solid results for 2019 and issued guidance for 2020. It even committed to going above and beyond industry standards for water treatment and carbon emissions.

While the company is in the midst of an exciting transition period, broader economic concerns overshadowed its progress. In fact, shares of the dividend stock had their worst weekly performance in over a decade (and perhaps ever). Here's what investors need to know. 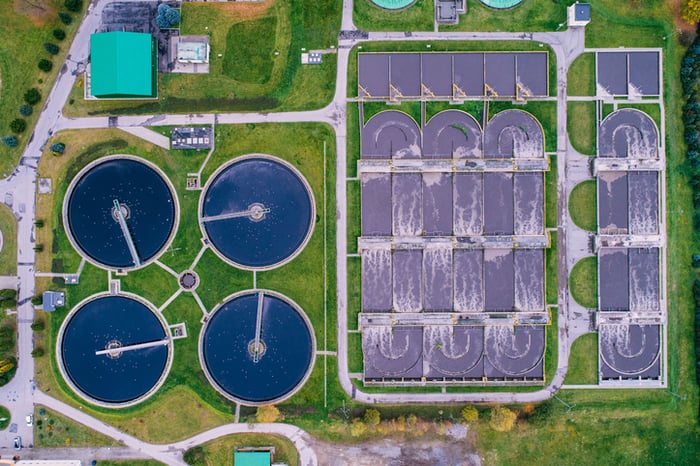 Essential Utilities used to be called Aqua America, but the company changed its name and stock ticker to reflect its changing business. The company is anticipating the acquisition of Peoples Gas to close on March 16, which will combine Aqua America (a water utility) and Peoples Gas (a natural gas utility) under one roof.

The closely watched transaction makes for exciting times for shareholders. Many of the customers of Peoples Gas are also served by Aqua America, which creates the potential for unique synergies. For instance, the companies could replace aging gas lines and water lines at the same time, reducing costs and minimizing disruptions to customers and towns.

In fact, the idea for the acquisition was originally floated when Aqua America failed to takeover the public water utility of Pittsburgh, where Peoples Gas is headquartered. Owning the natural gas utility could give the combined company more clout with state regulators and politicians.

The transaction hasn't closed yet, which means full-year 2019 operating results only reflect the operations of Aqua America. But a number of smaller, water-focused acquisitions still led to solid year-over-year growth.

While net income grew at a healthy clip, an increase in the number of shares outstanding led to a decrease in EPS in the comparison period. In April 2019, Essential Utilities issued over 12 million shares of common stock in a public offering to raise funding to complete the Peoples acquisition.

The deal should close in mid-March -- and it will alter the business forever.

Customer overlap wasn't the only reason to combine Aqua America and Peoples Gas under one roof. The natural gas utility is expected to grow its rate base (the total value of assets from which regulated revenue is generated) at a compound annual growth rate (CAGR) of 8% to 10% from 2019 to 2022. The water utility is expected to achieve a rate base CAGR of 6% to 7%.

Essential Utilities expects to waste little time investing in its regulated infrastructure. Here are the highlights from its full-year 2020 financial guidance:

The company also announced industry-leading environmental commitments for its water utility. The Aqua America subsidiary will implement new technology across its operations to mitigate perfluoroalkyl substances (PFAS), which are toxic compounds commonly used to make non-stick coatings such as Teflon, certain refrigerants, and certain fireproofing materials. The persistence of PFAS in the environment has earned them the nickname of "forever chemicals."

Essential Utilities will limit PFAS concentrations to 13 parts per trillion (ppt), which is well below the current non-binding regulatory limit of 70 ppt. One part per trillion is equivalent to one drop of water in an Olympic-sized swimming pool.

Additionally, Aqua America will power all water and wastewater operations in Illinois, New Jersey, Ohio, and Pennsylvania with renewable energy by 2022. Much of that will presumably come from biogas produced onsite, but the program could eventually be rolled out across operations in all eight states in which the company operates.

Investors have been waiting for the Peoples Gas acquisition to close for over a year. After finally receiving regulatory approval from multiple states -- the last coming in January 2020 -- Essential Utilities expects the transaction to close on March 16. The regulated nature of both subsidiaries should provide predictable (albeit slow) growth for investors with a long-term mindset. For now, investors will have to patiently await the next quarterly update in May.