The digital-identity company has crushed the broader market since its IPO. Will it manage to outperform in the next decade?

Okta (OKTA -3.57%) is one of the pioneers in the access-management and digital-identity space. Making its debut on the public markets in April 2017, the company priced its shares at $17.

It raised nearly $200 million in the IPO and was previously backed by private-equity stalwarts, including Sequoia Capital, Khosla Ventures, and Andreesen Horowitz. Okta gained 38% on its first day of trading and closed at $23.51. The stock has since generated massive returns in just under three years.

So how much would an investor have if they invested $1,000 in Okta's IPO? An investor could have purchased 58 Okta shares for $986. That investment will have grown to $7,306 as of this writing, yielding more than seven times the original investment.

The company continues to benefit from the increasing number of data breaches making headlines around the world. Employees now have multiple logins, which make them vulnerable to cyber-attacks and digital theft. This is where Okta comes in. Its identity management platform is a cloud-based system that handles user authentication for employees across multiple business and software applications. 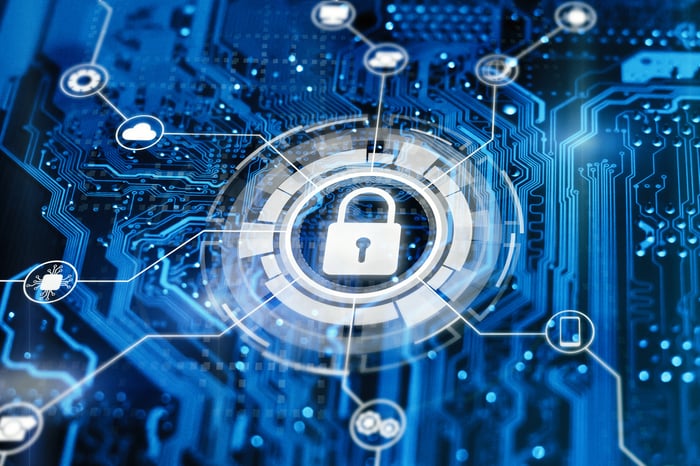 This easy-to-use platform has a single login process and is fast gaining traction among enterprises. In its most recent quarter ended in January, revenue increased 45% year over year, driven by a 46% increase in subscription sales.

Okta is focused on growing its base of large enterprise customers. Okta now has 1,467 customers with an annual contract value (ACV) of over $100,000, good for year-over-year growth of 41%.

The company has managed to gain traction across various industries too. In the fourth quarter, it won over a Global 2000 power management company with over 100,000 employees where contractors and partners will be able to securely access cloud and on-premise applications. Autodesk, a leader in the design software space, selected Okta's identity cloud to centralize access management for its customers.

Another important win for Okta was with a European film and television studio and distributor that has over eight million subscribers. Okta is optimistic that its offerings will support peak website traffic of up to 90,000 connections per minute during large sporting events, including soccer games. The European studio has partnerships with Disney and Netflix, and the former is bound to rely on Okta to provide a secure customer experience.

Okta is a market leader in the enterprise identity access management (IAM) segment. It has over 6,500 third-party app integrations, giving it a massive advantage among peers. This software-as-a-service company is part of a high-growth market. The global IAM market is expected to rise at an annual rate of 13.1% from $9.9 billion in 2018 to $23.5 billion in 2025, according to a report from Grand View Research.

The report states, "Increase[d] spending on security solutions by government bodies and large-scale enterprises to curb identity theft and to adhere to regulatory compliance are the prominent factors expected to boost the growth."

International sales account for approximately 15% of total revenue, giving Okta enough opportunities to grow sales at a rapid pace in the next decade. In fiscal 2020, the company increased international sales by 48%. For 2021, Okta is guiding to total revenue between $770 million and $780 million, indicating a growth rate between 31% and 33% year over year.

Similar to most growth companies, Okta is also posting an adjusted loss. Despite a high gross margin of 72%, Okta spends heavily on research and development as well as marketing. In 2021, it expects an operating loss between $65 million and $57 million. But growth investors generally bet on the huge market opportunity rather than focusing on near-term profitability.

What's next for investors?

Okta has confirmed that it will reinvest a significant portion of revenue to focus on product innovation, which will help the company expand its customer base and retention rate as well as enhance its competitive positioning.

The stock has been a massive wealth creator, but the road to riches has not been a smooth one. The high valuation metrics make it extremely volatile in a market sell-off. The company has a price-to-sales ratio of 26, and investors can expect volatility in the short term, especially if coronavirus fears further affect the global economy.

However, Okta's increasing customer base, expanding product portfolio, and rising profitability make it a top pick among growth stocks.