The new Adidas GMR insoles will help EA "FIFA" players up their games.

Alphabet's (GOOG -3.41%) (GOOGL -3.24%) Jacquard by Google technology has been slowly rolling out to consumers, first in a couple of Levi Strauss jeans jackets and a Saint Laurent backpack. A small digital tag is placed inside the item that syncs with your other devices, allowing the wearer to control their music, take pictures, or answer calls by touching their sleeve or backpack strap. It's a new way to make our technology further disappear into the background, while still providing the functionality we desire.

Google's technology will next feature in Adidas' (ADDD.F -5.49%) (ADDYY -1.37%) new GMR insole, which will track the wearer's foot speed, touch, control, and kicking power, and will send that data to Electronic Arts' (EA -1.18%) FIFA Mobile game to help gamers improve their virtual teams. Also, the insoles will be compatible with an app available on both Android and iOS. 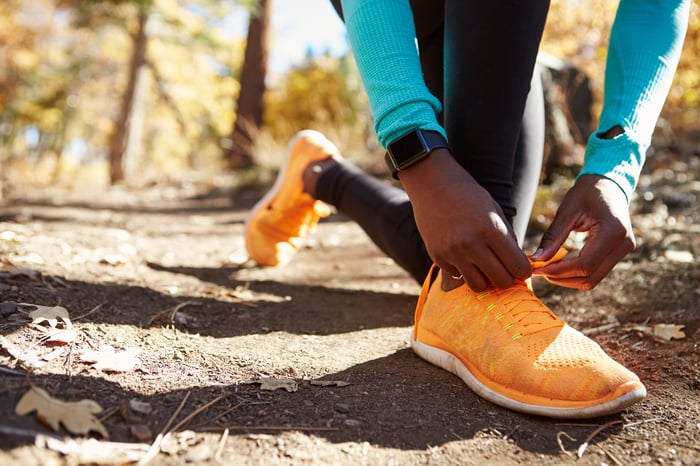 The insole is scheduled to drop on Tuesday. Both Adidas and Nike have been bringing more technology to their footwear lately. Nike has its self-lacing basketball shoes, so the GMR insole would seem to be the logical next step in turning sneakers into full-on wearable tech.

This isn't the first time EA has collaborated on footwear. In January, Nike released a limited-edition version of its Air Max 90 silhouette with EA Sports branding to market EA's Madden NFL. And in December, Adidas released a special-edition Real Madrid jersey in collaboration with EA Sports FIFA 20.

Electronic Arts is obviously interested in getting more people engaged with its widely popular FIFA franchise, which is its largest and most popular game, and generates a significant amount of revenue each year.