Please ensure Javascript is enabled for purposes of website accessibility
Log In Help Join The Motley Fool
Free Article Join Over 1 Million Premium Members And Get More In-Depth Stock Guidance and Research
By Bram Berkowitz - Mar 9, 2020 at 8:04AM

Banks with lots of interest-bearing deposits and fixed-rate loans tend to fare much better when interest rates decline.

Bank stocks have been getting hammered ever since the Federal Reserve on March 3 cut its benchmark interest rate a half point in response to the impact coronavirus has had on markets. The move dropped the federal funds rate inside a range of 1% to 1.25%, and the 10-year treasury note to an all-time low.

The reason so many banks are struggling is because the majority of them, especially with the increased reliance these days on commercial lending, are asset sensitive. That means that have a higher amount of outstanding loans tied to falling interest rates than deposits. So, when rates drop, more loans are losing yield than deposits, narrowing the net interest margin, the difference between what banks pay for their capital and what they earn on loans.

Now, during a time like this, it might be easy to abandon the banking sector altogether. However, the good news is that not all banks are asset sensitive. Some actually do better at least in the short term in a falling rate environment. 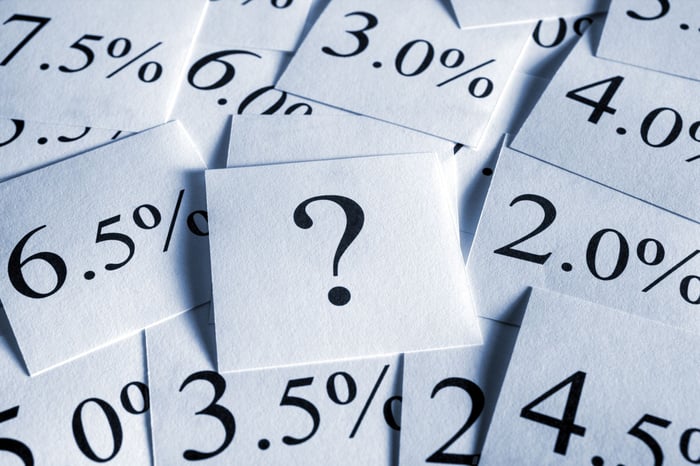 Types of banks to examine

Although never a guarantee, banks that benefit in a falling rate environment are typically those that are liability sensitive. In most cases, that means the bank has more deposits that are interest rate sensitive than loans. If a bank's funding costs as a whole drop quicker than its loan yields, even though loan yields are taking a hit, the gap between the two-the net interest margin-still widens.

To find banks with good prospects in a falling rate environment, you want to look for a few things. A liability sensitive bank should have a high amount of interest-bearing deposits, which are those that you pay interest on to attract to the bank (think saving accounts and CDs). You should also be looking for banks with a higher amount of fixed-rate loans. Fixed-rate loans are locked in at a certain rate, so when interest rates drop, they don't reprice down. Borrowers could refinance those loans, but it would cost them a fee and therefore benefit a bank's non-interest income.

There are other factors that come into play when looking at liability-sensitive banks such as a bank's borrowing and securities portfolio, and the yields and maturities in that portfolio, but finding banks with lots of interest-bearing deposits and fixed-rate loans are the main characteristics you want to look for.

Specific banks to check out

Thrifts, also known as savings and loan associations, tend to fit this bill. There are not as many of these banks around as there were in the 1980s, but there are still a number of options. These banks are known for making lots of home loans and offering savings accounts. You'll notice that while many of the largest banks and the KBW Index have seen their stock prices suffer since the Fed's rate cut on March 3, some of these thrift stocks have seen moderate increases. Below are two thrifts I am specifically keeping an eye on.

TFS Financial Corporation (TFSL -1.78%) is a great example of a bank that should perform well in a falling rate environment. Based in Cleveland, Ohio, this nearly $15 billion asset bank has almost its entire deposit base composed of interest-bearing deposits, according to the FDIC. Over time, as the rate cut seeps in, the cost of maintaining those deposits should come down. Additionally, almost all of the bank's loans are in residential mortgages, and more than half of those don't reprice for at least three years, while many more do not reprice for five or 15 plus years.

New York Community Bancorp, Inc (NYCB -0.11%), which holds more than $53 billion in assets, has more than 60% of its deposit base composed of interest-bearing deposits, according to the FDIC. About three-quarters of its loans, according to the company's most recent investor presentation, are fixed-rate, multi-family loans. The average yield of the entire portfolio at the end of 2019 was nearly 3.9%, which is great in this rate environment. However, one thing to note is most of those fixed-rate loans have a weighted average life of less than three years, but even so, the portfolio will not be hit right away with the rate cut.

Don't give up on banks

Although falling interest rates can hurt a lot of banks in the short-term, the banks that are liability sensitive are often in a much better position. The main characteristics of these banks are those that have lots of interest-bearing deposits that will price down with rates, combined with a good amount of fixed-rate loans that do not lose yield when rates decrease. Additionally, these fixed-rate loans are likely to generate some refinancing fees, as people look to lock in at a lower rate. Thrift banks such as New York Community Bancorp and TFS Financial Corporation are in a good position to take advantage of the current environment.