AES is shifting to clean energy and its CEO says the coronavirus isn't a worry, so why's the stock falling?

Shares of AES (AES 3.19%) tumbled 15.8% in February, according to data provided by S&P Global Market Intelligence. A quarterly report that missed consensus estimates was largely to blame, and investors were quick to press the panic button after AES' stock's solid run-up since September 2019. The broader market sell-off has only added fuel to the fire: The utility stock has lost another 17% in March already.

AES reported a 7.3% decline in year-over-year revenue and a loss of $120 million for the fourth quarter versus a profit of $181 million in the year-ago period. For the full year, the company earned only $0.45 per share compared to $1.48 in 2018. Asset impairment charges on some coal-fired plants were largely to blame for the steep loss. The highlight of the earnings report, in fact, was AES' renewed focus on renewable energy and reducing its dependence on coal. 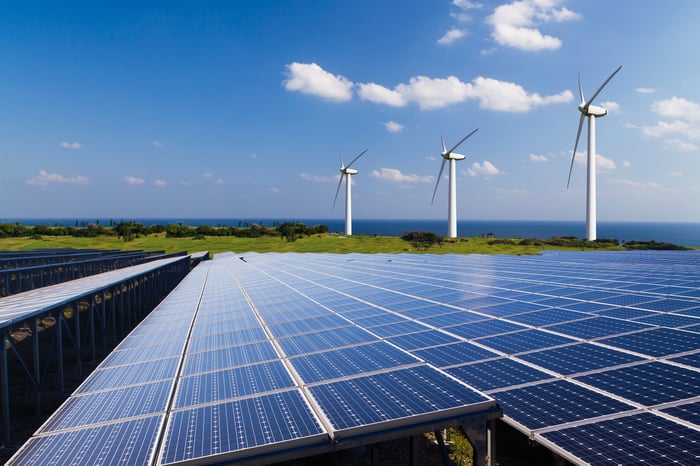 Although planned asset sales and shutdowns are likely to shave a good chunk off AES' 2020 earnings, steady income from regulated utilities and growth in renewable energy should help offset the weakness to a large extent. AES' fresh renewable energy goals are worth a look: The company signed renewables purchasing power agreements worth 2.8 gigawatt (GW) in 2019, driving its total renewables backlog up to an impressive 6.1 GW.

By the end of this year, AES expects coal to generate less than 30% of its total electricity from the current 34% and further down to less than 10% by 2030. In another bit of good news, aggressive debt reduction recently helped AES achieve its first investment-grade rating by Fitch and management announced a 5% increase in dividend in December.

The aggression with which AES intends to move away from coal into renewables is notable, given the massive potential in renewable energy. I believe that had it not been for the coronavirus-triggered market meltdown, AES stock may not have taken as big a hit.

In an interview on Yahoo Finance, AES CEO Andres Gluski said he expects "minimal" impact of the COVID-19 coronavirus outbreak on the company, simply because AES primarily distributes power under long-term contracts to customers in the U.S. Gluski says any impact, in the longer term, could be from supply chain disruptions in solar panels or lithium-ion batteries that AES uses for battery storage. These fears, along with worries about a looming recession, are pummeling AES shares.