Please ensure Javascript is enabled for purposes of website accessibility
Log In Help Join The Motley Fool
Free Article Join Over 1 Million Premium Members And Get More In-Depth Stock Guidance and Research
By Taylor Carmichael - Mar 9, 2020 at 8:37AM

Arrowhead Pharmaceuticals (ARWR 2.04%), a market darling in 2019, lost 15% of its valuation in February, according to data provided by S&P Global Market Intelligence. This is part of a larger free fall in the biotech's stock price in 2020. Arrowhead's valuation has dropped almost 50% since Jan. 2.

While some of this fall is due to fears from COVID-19, the stock started dropping way before that was an issue. So what's going on? 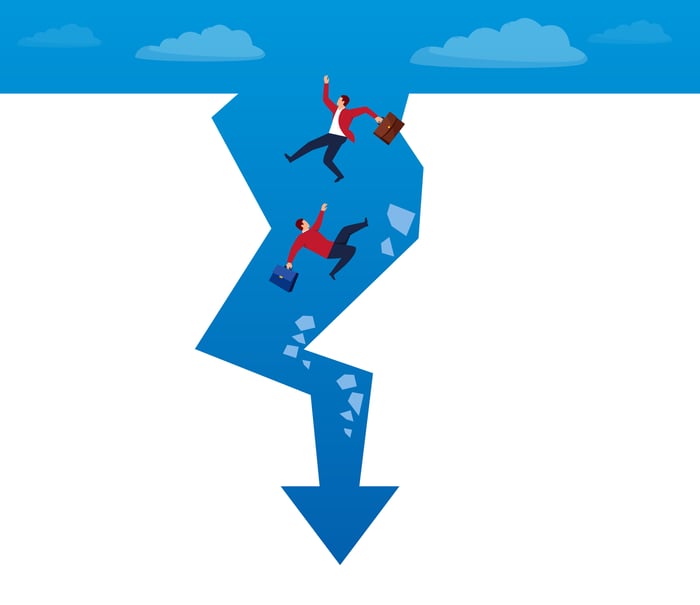 Arrowhead Pharmaceuticals is a biotech company that is focused on RNA interference (RNAi) drugs. What shot the company to prominence was its deal with Johnson & Johnson in 2018. The pharmaceutical giant paid $250 million to license Arrowhead's hepatitis B drug. That deal provided a lot of necessary cash to the young biotech, and it was a validation of Arrowhead's science. The stock more than tripled in 2018, running up 237%.

The news was even better in 2019. The company reported positive data from all its clinical trials. That sent the stock soaring 410% last year. For those scoring at home, the stock tripled in 2018 and then quintupled in 2019.

So part of the problem is that Arrowhead is a victim of its own success. All the good news from the last two years sent the stock into the stratosphere. When the company's valuation hit $6.3 billion in early 2020, some observers figured the stock would take a hit, just because of its valuation. And so far, that's exactly what has happened.

To make five times your money in a year is a wonderful return, and Arrowhead used that opportunity to turn its share price into some cash. Its secondary offering was priced at $58 a share, raising approximately $232 million for the company in December.

The cash raise was just a reminder that Arrowhead has no drugs on the market. Like other unprofitable biotechs, it needs cash to stay alive while all its drugs make their way through clinical trials. So while the stock started off the year at $63 a share, it soon fell below the secondary price, and then kept falling. A negative note and underperform rating from analyst Mani Foroohar at SVB Leerink didn't help the stock, either. Add in the COVID-19 panic, and that's how you get an almost 50% haircut in a little over two months.

The good news for long-term investors is that the investment thesis is still intact. Clinical trial data continues to impress. None of the company's drugs are in phase 3 trials yet, so Arrowhead is at least a couple of years away from having any drugs on the market. Still, while general market panic over COVID-19 might send the whole market down in the short term, the long-term picture for Arrowhead remains bright. Investors should keep their eyes on the clinical data and not get scared off by market gyrations.