Please ensure Javascript is enabled for purposes of website accessibility
Log In Help Join The Motley Fool
Free Article Join Over 1 Million Premium Members And Get More In-Depth Stock Guidance and Research
By Dan Caplinger - Updated Mar 9, 2020 at 10:23AM

Find out what so-called "circuit breakers" are intended to do.

The stock market has been increasingly volatile in recent weeks, and the moves to the downside have gotten steeper as worries about the coronavirus and other market disruptions have gotten worse. On Monday, many investors were surprised to learn just minutes after the market's normal 9:30 a.m. EDT open that trading would be halted temporarily. That in itself caused some consternation, especially among those who were looking to make stock trades based on the weekend's events.

As surprising as they were to some, the rules governing the trading curbs that happened early on March 9 have been in place for years. Although it's the first time a stock market halt has occurred since the 2008 market meltdown, these provisions -- also known as "circuit breakers" -- are intended to keep violent market movements as orderly as possible. 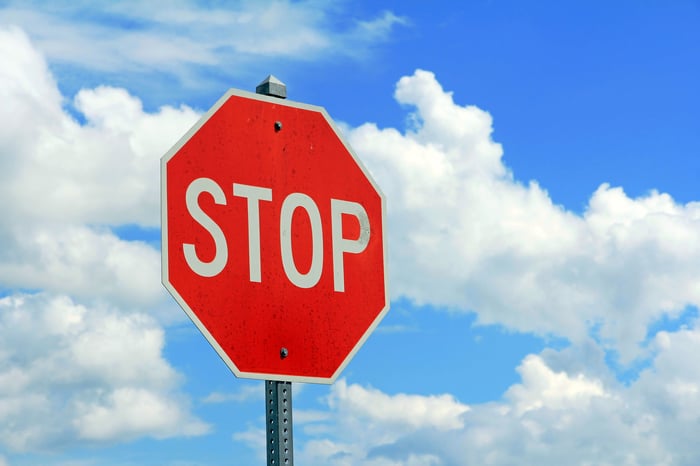 What are the circuit breaker rules?

Circuit breakers were first established following the 1987 stock market crash. The motivation came from efforts to try to stop computer-driven program trading, which many argued made the 1987 crash more extreme than it otherwise would've been.

Exact rules governing circuit breakers have changed over the years. At first, the levels at which various pauses would occur were tied to movements in the Dow Jones Industrial Average (^DJI 2.68%), with moves of a certain number of points triggering halts in trading of various lengths.

The current version of the circuit breaker rules are included in the U.S. Securities and Exchange Commission's Rule 80B, which took effect in 2013. They include the following:

Because the S&P fell 7% in just a few minutes following the market open on Monday morning, the first-level circuit breakers took effect.

Various other markets have different sorts of circuit breakers. In the futures markets, trading halts occur when prices move a certain percentage in either direction from their previous-day settlement price. For instance, on Sunday evening, stock index futures halted trading once they dropped 5% from where they closed the previous Friday. Similar measures apply to individual stocks, providing for brief five-minute pauses when a stock's price moves 5% to 10% within a short window of time.

The idea behind circuit breakers is to give investors some time to consider their strategy in the wake of a rapidly falling market. In a best-case scenario, traders take the time during the trading stoppage to consider whether the drop has been overblown and look for opportunities to stop or reverse the decline. That's what happened immediately after the trading halt on the morning of March 9, as the S&P 500 trimmed its losses to less than 6% just minutes after trading resumed.

However, there's no guarantee that circuit breakers will actually do anything other than delay the inevitable. Critics of trading halts argue that anything that stops free markets from letting prices adjust to reflect new information and investor supply and demand is more of a liability than an asset.

Like them or hate them, circuit breakers are in place, and they'll stop the stock market from trading when they're triggered. Anticipating when trading halts could occur can be vital if you want to take maximum advantage of declining share prices to buy top stocks when markets plunge.