Please ensure Javascript is enabled for purposes of website accessibility
Log In Help Join The Motley Fool
Free Article Join Over 1 Million Premium Members And Get More In-Depth Stock Guidance and Research
By Billy Duberstein - Mar 10, 2020 at 8:45AM

This steady, mostly coronavirus-proof stock with a solid yield and a history of dividend growth will get you through the hard times.

Obviously, travel, transport, bank, and oil stocks are getting hammered in this current market sell-off. However, there are also several high-quality stocks in other sectors that are likely to benefit from both the "stay-at-home" economy, low oil prices, and low interest rates -- though those stocks have seen their stocks hit too.

This is especially true for the telecom and cable stocks. Telecoms are perfect for this environment. As more and more people stay home, the more they should use high-speed broadband and premium video services. Meanwhile, a crash in oil prices is a natural price cut, which could mean that the consumer will perhaps either stay in the cable bundle, or buy more OTT streaming video services.

Finally, the recent interest rate cut from the Federal Reserve -- with perhaps another one coming -- should benefit not only telecoms' customers but also the cable companies' balance sheets, since many have rather high debt levels compared to other sectors. 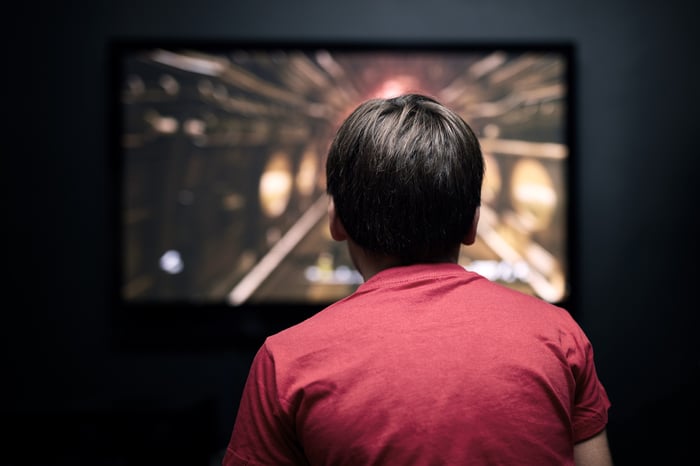 Comcast (CMCSA -0.23%) is the largest broadband and cable operator in the U.S., in addition to being a huge content company as well with NBCUniversal. The company also made a massive $38.8 billion acquisition of European pay TV giant Sky back in October 2018, giving it both content and satellite distribution across Europe.

With a broadband and cable footprint across the U.S. and Europe, Comcast seems poised to reap the benefits of having people stay at home and watch television, with its prime sports content such as Premier League soccer, owned by Sky, along with basketball on NBC or TNT, and hopefully the Olympics this summer. NBC also has must-watch live news such as MSNBC and CNBC, so that consumers can keep tabs on the markets and the presidential race.

Importantly, NBCUniversal's streaming service, Peacock, is set to launch on April 15, with three tiers: free, $4.99 premium with ads, and $9.99 premium with no ads. Customers of Comcast and Cox video subscribers will get the "premium with ad" service for free, which will feature next-day access to all series, sports, news, and new Peacock-only originals. In a new and interesting twist, you'll be able to access Late Night shows with Jimmy Fallon and Seth Meyers before they air on regular TV.  Meanwhile, the ad-supported free tier will have limited content of freshman broadcast series only, along with some sports and live news -- but not as much as the premium Peacock offering.

As Comcast transitions from a declining linear cable bundle, it will be giving customers flexible options to choose between a mix of subscription and advertising. In allowing the consumer to sub-segment themselves, Comcast is hoping to achieve 30 million to 35 million subscribers by 2024 with Peacock. That's about half of Netflix's (NFLX -1.96%) 61 million U.S. subscribers as of last quarter. Of course, Comcast could still reap profits by selling targeted ads on the new streaming service, a step that Netflix has thus far refused to take.

Comcast is currently generating lots of cash flow, to the tune of $13.4 billion in 2019. That compares with just a $173 billion market capitalization as of this writing, which means Comcast is trading for just 12.9 times free cash flow. Of that cash flow, only $3.7 billion was paid out as dividends, which means Comcast's 2.4% dividend appears quite safe, even with a recent 10% raise in the payout per share.

In fact, investors can pretty much bank on an annual Comcast dividend raise, even in hard times. Even in 2009 in the depths of the great recession, Comcast raised its dividend 8% and has raised it at least 10% every year since.

Of course, Comcast also has net debt of $96.2 billion, after paying up for Sky in 2018. While that seems like a ton of money, it's only about 2.8 times Comcast's total EBITDA (earnings before interest, taxes, depreciation and amortization), which isn't all that high for a media or cable company.

In addition, the Federal Reserve just cut interest rates by 50 basis points, and given what's currently going on with Treasury rates and the oil sector, there could be more to come, paving the way for Comcast to refinance some of that debt at lower rates this year.

Of course, if coronavirus and the oil crash spur a deep U.S. recession, Comcast could see ad revenue pressure. In addition, Comcast also runs Universal Studios' parks, which will most certainly be affected in the near term. However, the parks division contributed only $636 million in Q4 EBITDA, less than 10% of the company's $8.4 billion in total adjusted EBITDA.

Yet Comcast's main business is still its broadband and cable businesses, which made up $5.9 billion of the Q4 EBITDA, and grew at 5% year over year. That business is likely to hold up well amid an economic slowdown, with more people staying at home amid coronavirus. And since they won't be spending on big-ticket items, they may just shell out the few extra bucks for an ad-free Peacock.