Please ensure Javascript is enabled for purposes of website accessibility
Log In Help Join The Motley Fool
Free Article Join Over 1 Million Premium Members And Get More In-Depth Stock Guidance and Research
By David Haen - Mar 10, 2020 at 10:00AM

Milestone Pharmaceuticals (MIST) expects to report top-line data from its phase 3 Node-301 clinical trial before the end of the month. If positive, the company expects to use the trial results to file for approval with the U.S. Food and Drug Administration (FDA). The company believes its drug etripamil marks the first self-administered drug to rapidly stop episodes of exceedingly rapid heart rate known as paroxysmal supraventricular tachycardia (PSVT). 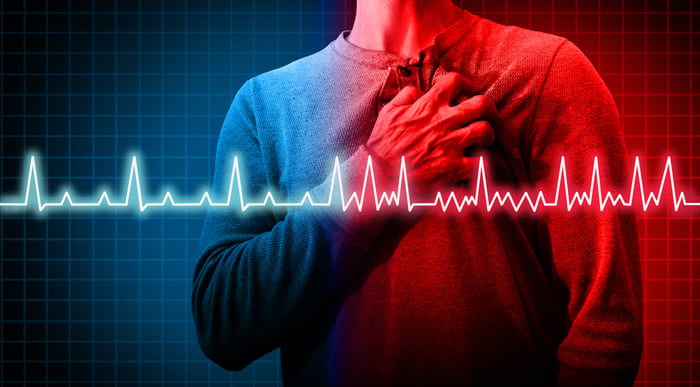 Patients with PSVT experience episodes of rapid heart rate, sometimes over 200 beats per minute, that start and stop without warning. The unknown timing of these attacks can seriously impair the quality of life for patients. PSVT can only be diagnosed during an on-going episode, making accurate diagnosis challenging.

One study in the U.S. pegs the prevalence of the disease at 0.2%, which translates to about 660,000 patients. A separate 2018 study published in the Journal of the American Heart Association highlights the difficulty in attaining accurate numbers. Using six years of data from Kaiser Permanente's 4.2 million members in Northern California, the study authors found a variety of medical codes were used for PSVT, including supraventricular tachycardia, preexcitation syndrome, paroxysmal tachycardia unspecified, atrial premature polarization, and cardiac arrhythmia unspecified. This study found that 0.168% of the population had symptomatic PSVT.

A separate study reported in 2018 reviewed a database containing demographic, medical, and prescription claims data for 89.8 million people under age 65. This study estimated a U.S. prevalence of PSVT at 1.24 million patients. Milestone estimates over 900,000 patients aged 65 and older, bringing the total number of PSVT patients to approximately two million. Regardless of exact numbers, hundreds of thousands, if not millions, of people have PSVT.

Roughly $3 billion is spent to treat 600,000 patients in the U.S. annually. Severe PSVT episodes lead to more than 150,000 emergency room and hospital visits. Etripamil, a nasal spray, could allow for the self-management of these attacks at home, potentially eliminating 50% to 75% of hospital visits. That would be a major cost saver for the healthcare system.

The Node-301 pivotal phase 3 trial will enroll 500 patients. Two-thirds will receive etripamil and one-third will get a placebo. The trial is double-blind, meaning both the patient and doctor do not know if the treatment is etripamil or placebo. The primary endpoint will evaluate the time to convert a PSVT episode to sinus rhythm (normal heart rate). Only 150 events need to take place for the company to run the analysis.

Milestone announced in its earnings release on March 6 that it expects to announce the results of the Node-1 trial in March. Assuming positive results, the company plans to seek FDA approval based on the trial data and previously completed studies. In addition, Milestone commenced the Node-303 open-label safety trial, which it claims will be the largest clinical trial ever conducted for PSVT.

Milestone successfully completed its IPO in May 2019, raising net proceeds of $86 million. A cadre of reputable healthcare investors backed the company prior to the IPO and continue to hold significant positions. Institutional shareholders own 58.7% of the stock. According to MarketWatch.com, only 12.2 million of the 24.6 million issued shares are in the public float. This means only half of the shares are free to be traded. Positive trial results could send the stock substantially higher since so few shares will be available.

Milestone reported a healthy balance sheet with $119.8 million in cash as of Dec. 31. This is more than enough to get through the upcoming phase 3 results. The company will no doubt raise more capital if the phase 3 trial results are positive and the stock price increases. If negative, expect a severe stock sell-off while the company regroups for its future.

Biotech investors liked Milestone's latest earnings report, sending shares up 9%. With $120 million in the bank, a burn rate of $20 million per quarter, and pivotal trial results in the coming weeks for a large patient population, risk-tolerant investors may want to own a piece of Milestone. The trial results, expected this month, will drastically change the complexion of the company. I view this like a lottery ticket where the payout can be huge or a total loss. Invest accordingly.