Please ensure Javascript is enabled for purposes of website accessibility
Log In Help Join The Motley Fool
Free Article Join Over 1 Million Premium Members And Get More In-Depth Stock Guidance and Research
By Daniel B. Kline - Mar 11, 2020 at 10:38AM

The fast-food chain continues to innovate (even though this dish is pretty silly).

Yum! Brands (YUM 1.86%) has in recent years been unusually aggressive when it comes to menu innovation, introducing such creative and popular items as its Doritos Locos Taco, Nacho Fries, and the Cheetos Quesadilla.

Next up, the Mexican chain will on Thursday roll out the Triplelupa -- a three-shelled, three-flavored monstrosity that combines three mini Chalupas, and contains twice as much seasoned beef as the chain's regular Chalupa, according to a press release. 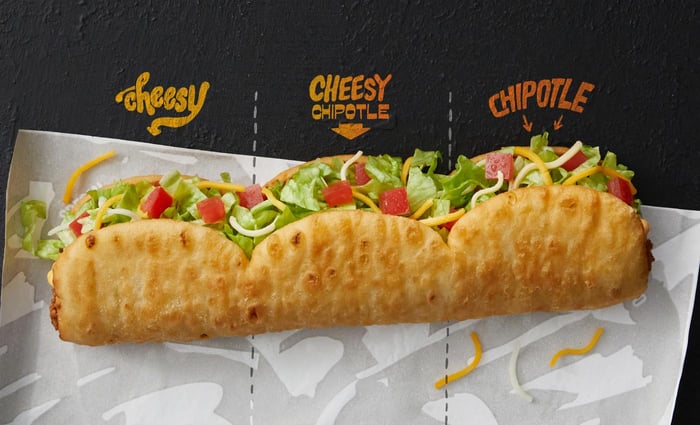 Taco Bell has a history of trying offbeat food combinations, like mixing quesadillas with Cheetos. This time, it's combining a Chalupa with... two more Chalupas. Image source: Yum! Brands.

A first for Taco Bell

Taco Bell describes the Triplelupa as its "first-ever tear-apart menu item."  Each shell has a different flavor, with "nacho Cheese on one end, chipotle on the other, and a combination of the two, cheesy chipotle, in the middle."

"At Taco Bell, we recognize and love the fandom that the Chalupa has cultivated over the years, and it's why we want to bring our fans an all-new flavor and shell experience with the Triplelupa," said Associate Manager of Research & Development Taco Bell Kristine Futalan. "The Triplelupa's nationwide launch gives us the opportunity to celebrate the transformation of this beloved menu item, and we can't wait for everyone to taste this latest innovation."

Do people want this?

Taco Bell has a loyal audience that has generally responded well to its menu innovations. Nobody was clamoring for a Triplelupa because it's not a thing -- the Mexican chain has made it up. But given its customers' previous responses to its gimmick dishes, they'll probably give this one a chance too.