Department stores and mall-based chains including Macy's (M -3.10%), Kohl's (KSS -3.77%), Bed Bath & Beyond (BBBY -2.14%), and Best Buy (BBY -2.73%) were all getting shellacked as investors continue to flee nonessential retailers, especially those that were struggling before the novel coronavirus outbreak took hold of the market.

Investors seem to think that shoppers will want to avoid brick-and-mortar stores if the outbreak spreads and that they are more focused on spending money on things like food and medicine rather than discretionary purchases like apparel, home goods, and electronics. Meanwhile, the specter of supply chain disruptions from China also looms over these stocks and could cause inventory shortages in the coming weeks. 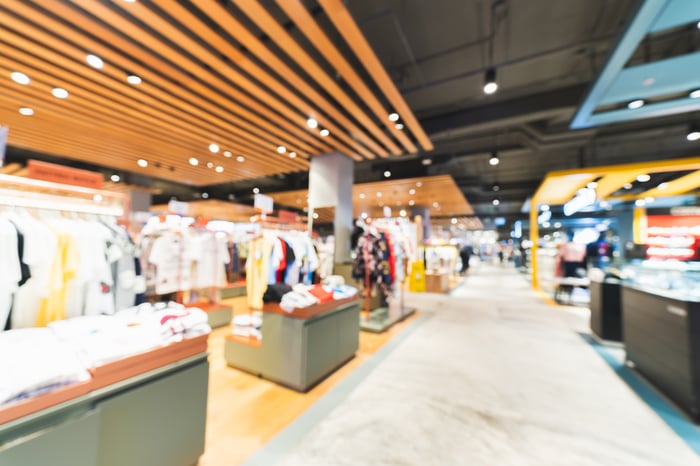 Stocks opened sharply lower this morning as hopes that the federal government would intervene to boost the economy faded, following a rally yesterday afternoon after President Trump suggested a payroll tax cut and other stimulus measures.

Early this afternoon, the World Health Organization declared COVID-19 to now be a global pandemic. There's no strict definition for that term, but it shows how far the disease has reached and the global emergency it is causing.

There was no company-specific news out on the group of retail stocks above today, but all four have underperformed the market since Feb. 21, when stocks began to fall sharply on news that the coronavirus outbreak was picking up steam. 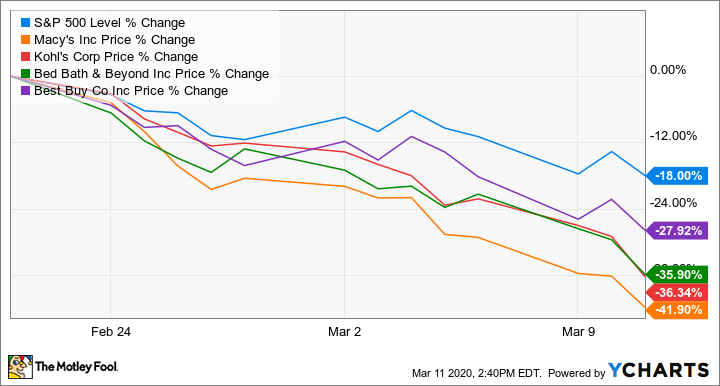 Macy's, the worst performer of the bunch, is down 42% since then. The retailer had just announced a three-year turnaround plan in January, which included store closures and layoffs, as well as investments in growth areas. More than most retailers, Macy's counts on international tourism to drive a portion of its business, and international travel has dropped significantly since the outbreak spread. Macy's also warned in its earnings report at the end of February that it expected to see a supply chain-related slowdown in goods from China.

Like Macy's, Kohl's has also been struggling to deliver meaningful growth in recent quarters as a much-hyped partnership with Amazon doesn't seem to have sparked the traffic jump that investors expected. Kohl's reported better-than-expected results for the fourth quarter last week, but also forecast a decline in earnings per share of around 10% this year. An expanding coronavirus outbreak could further dent profits.

Bed Bath and Beyond is also in the midst of a turnaround plan, which began when new CEO Mark Tritton took over in November. Tritton has made a number of moves to try to right the ship, including dismissing most of the executive team and selling personalizationmall.com for $252 million to 1-800-Flowers to free up cash to fund needed improvements. However, adjusted comparable sales fell 13% through December and January, and profits have been disappearing as well. The COVID-19 coronavirus outbreak is likely to delay needed improvements and add to the company's challenges.

Finally, Best Buy appears to be in the strongest position of the bunch and said in its earnings report two weeks ago that it still expected comparable sales to grow in the first quarter despite the impact of the coronavirus. However, the market crash and the threat of a recession could cause some customers to delay spending on big-ticket items like TVs and other electronics that Best Buy relies on.

The recent sell-off has made these stocks undeniably cheap, according to conventional metrics. Macy's, for example, is now trading at a price-to-earnings ratio of just 3.7 based on the midpoint of its earnings-per-share guidance for 2020. The retailer also offers an incredible dividend yield of 16%, which it should be able to fund based on its historical performance. Kohl's, meanwhile, now trades at a P/E of 6.4 based on this year's forecast and pays a dividend yield of 10%, which also appears to be stable.

These stocks could easily continue to fall, as panic about the outbreak appears to be growing as its economic impact is unknown. However, they already appear to be in deep value range as investors are assuming the worst. If they can survive the coronavirus outbreak and potential recession, these stocks should eventually reclaim at least some of their losses in recent weeks.