Please ensure Javascript is enabled for purposes of website accessibility
Log In Help Join The Motley Fool
Free Article Join Over 1 Million Premium Members And Get More In-Depth Stock Guidance and Research
By Bram Berkowitz - Mar 11, 2020 at 7:50AM

The KRE, an exchange-traded fund tied to the SPDR S&P Regional Banking Index, saw a roughly 24.5% gain in 2019, certainly no slouch of a performance. But the ETF failed to beat out the S&P 500, which posted more than a 28% return in 2019, or The KBW Index, a benchmark index of 24 of the largest banks stocks in the country, which generated a 30% return.

The KBW and KRE do share some of the same holdings, particularly the largest of regional bank stocks. But none of those large regionals could keep up with the performances of the largest players. Bank of America (BAC -2.29%), JPMorgan Chase (JPM -2.33%), and Citigroup (C -2.36%) all posted massive returns of 40% or higher, with Citigroup just shy of a 50% return. Although the impact of coronavirus and the Federal Reserve's recent interest rate cut has certainly dampened the outlook for most bank stocks this year, I think regional banks are in a better position to weather the storm. 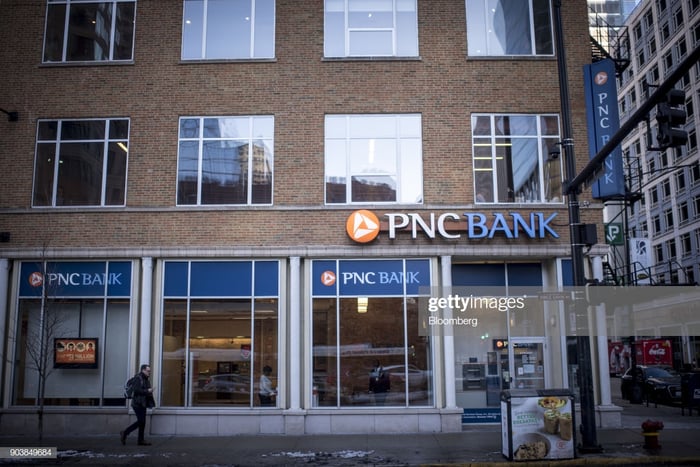 Margins could be a little better

Without a doubt, margins at most banks are going to take a hit. The half point rate cut is the largest cut in more than a decade. I don't think many banks will see their net interest margin (NIM) stabilize or expand, but for what it's worth, regional banks appear to have done a better job as of late at controlling their NIM, which is the difference between the interest banks earn on loans and the interest they pay out on deposits. According to the FDIC, all banks between $10 billion and $250 billion in assets collectively only saw their NIM decline by 1 basis point in the third and fourth quarters of 2019. (These calculations may include some banks that are not publicly traded.) During the same time period, banks with more than $250 billion in assets lost 6 basis points collectively on their NIM .

Furthermore, regional banks in my opinion seemed to be slightly more optimistic coming into the year, as deposit costs have come down. People's United Financial (PBCT), with roughly $58 billion in assets, grew deposits 24% between the end of 2018 and 2019, and saw slight margin expansion in the fourth quarter of 2019 as a result of "disciplined management of deposit costs."  PNC Financial Services Group (PNC 0.25%), with $380 billion in assets, said the rate paid on its deposits declined by 0.15 percentage points between the third and fourth quarters of 2019. The bank's management team added that "deposits have been stickier than what we would have expected."

It also looks like regional banks are expecting less of an impact from a significant new accounting rule that just went into effect this year.

The current expected credit loss (CECL) rule requires banks to forecast losses on the life of a loan before they actually happen. Under the old accounting method, banks did not book losses on loans unless some event occurred that made them believe a borrower might default or not be able to make their loan payments.

Now, banks have to book the losses expected over the life of a loan as soon as loans are originated. Although the increases can be phased in over the next three years, most banks will start seeing higher reserve amounts in the first quarter of this year, which has a direct and negative impact on earnings.

For instance, JPMorgan is projecting a total increase on its allowance for loan losses of around $4.3 billion, or about 30% more. Larger regional banks such as PNC and the $120 billion asset M&T Bank (MTB -1.81%) are projecting increases on their reserves of 21% and 8%, respectively.

Regulatory relief on their side

Following the financial crisis in 2008, lawmakers passed the sweeping Dodd-Frank regulatory bill in order to ensure that such a crisis never happened again. But following years of pushback from the industry, which argued Dodd-Frank went too far, Congress passed a Dodd-Frank relief bill at the end of 2017, easing some of the regulations.

And no one will benefit more than regional banks. Most significantly, the reforms upped the asset threshold for "systemically important financial institutions" from $50 billion to $250 billion, giving lots of regional banks in this pool a relief on certain stress testing and other requirements.

But some provisions of the bill, despite being passed more than two years ago, only went into effect this year.

For instance, the banking regulatory agencies reduced capital and liquidity requirements  only this year for many large regional banks. Banks that hold less capital are usually more profitable because they can take capital generating no return and deploy it into assets or securities that produce yield. One analyst on PNC's most recent earnings call suggested the bank now had an extra $6 billion to $7 billion of cash it could deploy this year.

Regional banks can use this extra cash for things like stock buybacks or maybe to pursue an acquisition that will add scale. Either way, this is a benefit for regional banks that the largest banks will not enjoy.

Although coronavirus and the recent rate cut have complicated markets for banks right now, regional banks are looking at a smaller impact from CECL than larger banks, and a boost from regulatory relief. While banks as a whole may struggle this year, I still think regional banks are in a better position than their larger U.S. counterparts in 2020.