Please ensure Javascript is enabled for purposes of website accessibility
Log In Help Join The Motley Fool
Free Article Join Over 1 Million Premium Members And Get More In-Depth Stock Guidance and Research
By Will Healy - Mar 12, 2020 at 8:45AM

Finding differences in these similar consumer staples giants can help determine which one to invest in.

Most Americans come into frequent contact with products made by both Procter & Gamble (PG 1.61%) and Kimberly Clark (KMB 1.19%). These stocks have long served as a source of safety and dividend payouts for both conservative and income-oriented investors.

Still, despite their similarities, the two companies offer a somewhat different value proposition. The differences in size, as well as growth rates and dividend payouts, could help one to stand out above the other. Thus, investors need to review the financials of both companies to know which one might stand out as the more suitable investment.

Since consumers depend on these products in both good times and bad, both stocks serve as stable, if unexciting investment options. This makes these consumer staples stocks relatively recession-proof, but it doesn't mean they are foolproof. These companies face a constant challenge in keeping abreast of consumer tastes.

They also produce products that others can copy with relative ease in most cases. In the past, brand recognition and dominance of retail shelf space served as their competitive moat. However, with the rise of e-commerce, both P&G and Kimberly Clark have faced increased competition and reduced pricing power in recent years. Since this threat will probably not go away, these large, established players face more pressure than ever to offer what consumers want. 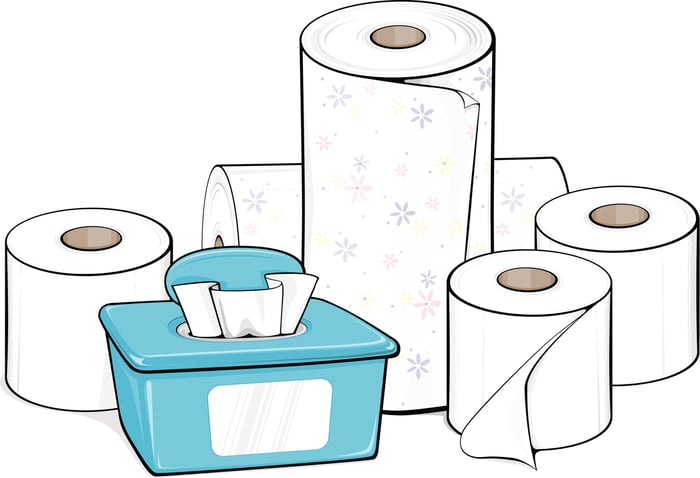 How is Procter & Gamble doing?

Procter & Gamble traces its origins back more than 180 years when it started as a "simple soap and candle company." Today, it maintains a market cap of $280.3 billion and encompasses brands as diverse as Tide detergent, Crest toothpaste, and Gillette razors.

Despite competitive pressures, Procter & Gamble stock experienced a bull market between the spring of 2018 and the end of 2019. During that 20-month period, it climbed by approximately 75%. Procter & Gamble has also appeared to stay on top of consumer tastes. Even with the increased competition, it managed to grow sales by 5% in its most recent quarter. 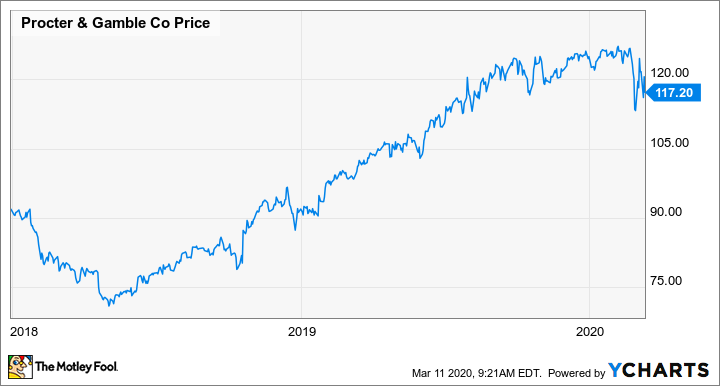 So far, the growth of the stock has paused in 2020. Still, even after the move higher, Procter & Gamble stock trades at a forward P/E ratio of about 22.8. This comes amid continued profit growth, which analysts expect to average 8.3% per year over the next five years.

Procter & Gamble stock also benefits from its dividend. Its annual payout currently stands at $2.98 per share and has risen for 63 straight years. Also, at a yield of around 2.45%, its yield stands significantly above the S&P 500 average of approximately 2.1%.

Moreover, its dividend payout ratio of about 60%, while significant, leaves the company in a position to continue payout hikes. This is also evidenced by the company almost being able to cover the $3.86 billion paid out in dividends over the previous two quarters with its free cash flow of $3.76 billion in the last quarter.

How is Kimberly Clark doing?

Kimberly Clark offers many similarities to its direct peer. It's been around for 147 years. Thanks to the company's expansion over its long history, about one-fourth of the world's population now use Kimberly Clark products. Kleenex tissue, Huggies diapers, and Scott paper products are among its numerous brands.

Kimberly Clark stock, which supports a market cap of around $49 billion, has closely followed that of Procter & Gamble in recent years, rising by about 70% between May 2018 and the end of 2019. However, unlike its counterpart, it did not register a significant net sales increase in its most recent quarter. 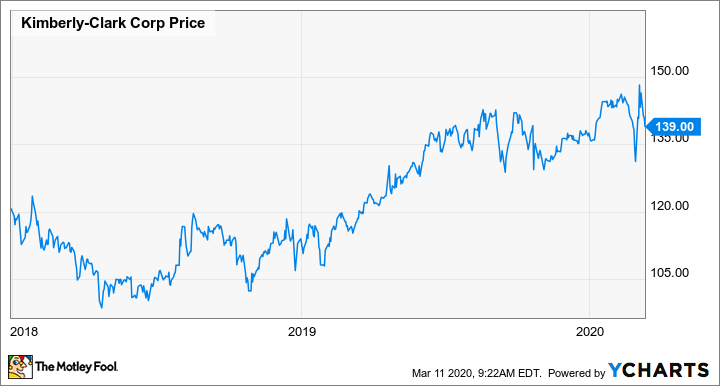 Kimberly Clark stock sells for a forward multiple of around 18.5. While that comes in lower than P&G's multiple, Kimberly Clark has also struggled more with growth. Wall Street forecasts that the company's earnings increases will average 5.8% per year over the next five years, noticeably lagging that of Procter & Gamble.

Still, Kimberly Clark may make up for that lower profit growth with its yield of about 3% on its dividend. Moreover, its $4.28 per share annual payout has increased every year for the last 47 years, and its payout ratio of around 58.7% closely resembles that of Procter & Gamble. The fact that the $354 million in dividends paid last quarter came in well below free cash flow of $582 million also helps with dividend sustainability.

So which one: Procter & Gamble or Kimberly Clark?

The most obvious difference between the two companies is size. Procter & Gamble's market cap is more than 5.7 times the size of Kimberly Clark's. Also, Procter & Gamble holds more in cash, $6.3 billion versus $442 million for Kimberly Clark. Outside of these factors, the companies do not seem to differ significantly. Analysts see somewhat higher profit growth for Procter & Gamble, while Kimberly Clark offers a modestly lower P/E ratio and a slightly higher dividend yield.

Still, the increased competition for both of these companies is not going to go away. In the fight to maintain and grow this customer base, I would feel more comfortable with the bigger company that holds a larger cash hoard. So, if choosing between these two companies, I would lean toward Procter & Gamble.